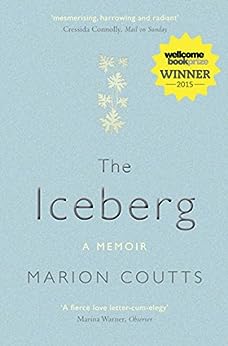 The Iceberg: A Memoir Kindle Edition

by Marion Coutts (Author) Format: Kindle Edition
See all formats and editions
Sorry, there was a problem loading this page. Try again.

In 2008 the art critic Tom Lubbock was diagnosed with a brain tumour. The tumour was located in the area controlling speech and language, and would eventually rob him of the ability to speak. He died early in 2011. Marion Coutts was his wife.

In short bursts of beautiful, textured prose, Coutts describes the eighteen months leading up to her partner's death. This book is an account of a family unit, man, woman, young child, under assault, and how the three of them fought to keep it intact.

Written with extraordinary narrative force and power, The Iceberg is almost shocking in its rawness. It charts the deterioration of Tom's speech even as it records the developing language of his child. Fury, selfishness, grief, indignity and impotence are all examined and brought to light.

Yet out of this comes a rare story about belonging, an 'adventure of being and dying'. This book is a celebration of each other, friends, family, art, work, love and language.

The book's truth is so pure and compressed, as though Coutts had condensed the coal of her experience into a diamond. Encountering it is like a near-death experience, at once traumatic and profoundly, permanently illuminating. Love itself is in these pages: not a representation of love, but love, pure and simple. The book reeks of it. ― New York Times

An exquisitely expressed portrait of three lives operating in the shadow of catastrophe... This is human trauma, profoundly and beautifully told. ― Independent on Sunday

Not quite like any other bereavement memoir... it reads like a huge juggernaut, its inevitable awful ending hurtling towards you at full speed from the first page. ― Evening Standard

Readers should be warned that sharing such a grief as closely as this marvellous book compels one to do is painful... This is a book that clearly had to be written... And certainly it ought to be read by anyone who ever pauses to consider our mortality. -- Diana Athill ― Sunday Telegraph

Marion Coutts has written a fierce love letter-cum-elegy in The Iceberg... This is far more than just another book about grief. -- Marina Warner ― Observer

The Iceberg is mesmerising, harrowing and radiant. There are times when to go on reading is almost unbearable, yet it is impossible to put it down. -- Cressida Connolly ― Mail on Sunday

It is a memoir quite unlike any other. It has the strength of an arrow: taut, spiked, quavering, working to its fatal conclusion... The Iceberg is an extraordinary story told in an extraordinary way. ― The Sunday Times

In writer and artist Marion Coutts' unflinching yet uplifting memoir... she becomes a chronicler of what it means to be human. ― Financial Times

At times so painful that it's hard to keep reading, this is nonetheless an unexpectedly reassuring book. ― Books of the Year, Daily Mail

The writing is lyrical, textured, perfectly paced; the sentences short so that we feel Coutts's moments of panic, her quickened heartbeat... [A] startlingly beautiful and inspiring pioneer text ― Independent

Hey - want to uncontrollably weep your eyes out? Read Marion Coutts describing her husband dying of a brain tumour. ― @caitlinmoran

The Iceberg is a depiction of loss so raw it couldn't but melt the coldest of hearts. But Coutts is also something of an alchemist when it comes to language, her prose a uniquely beautiful landscape of emotion. ― Independent, Books of the Year

An almost sculpted account of her and her infant son's endurance as her art critic husband died of a brain tumour: it is grand beyond words. ― The Scotsman, Books of the Year

Harrowing but spellbinding... communicates in an original, challenging way the changes in her life after her husband, Tom Lubbock, was diagnosed with a brain tumour - well deserves its acclaim. ― Guardian, Books of the Year

One of the most compelling and challenging books of the year. It has the strength of an arrow: taut, spiked, quivering, working to its fatal conclusion. ― The Sunday Times, Books of the Year

Marion Coutt's memoir of her husband Tom Lubbock's last days following the diagnosis of a brain tumour is as devastating as you might expect. Yet such is the intensity and passion of her writing, it's also strangely exhilarating. ― Josh Cohen, The Guardian, Books of the Year

The most heartbreaking memoir of the year... The writing is raw with grief, and offers no pat lessons or easy answers. ― Independent on Sunday, Books of the Year

A perfect piece of writing, it does justice to a terrible situation, giving it grace and even glory. -- Claire Tomalin ― The Week

Marion Coutts is an artist and writer. She wrote the introduction to Tom Lubbock's memoir Until Further Notice, I am Alive, published by Granta in 2012. She is a Lecturer in Fine Art at Goldsmiths College and lives in London with her son. --This text refers to an alternate kindle_edition edition.

The winner of the Wellcome Book Prize 2015, The Iceberg is an extraordinary memoir which leaves an indelible mark on all who read it. --This text refers to an alternate kindle_edition edition.
Read more

4.3 out of 5 stars
4.3 out of 5
137 global ratings
How are ratings calculated?
To calculate the overall star rating and percentage breakdown by star, we don’t use a simple average. Instead, our system considers things like how recent a review is and if the reviewer bought the item on Amazon. It also analyses reviews to verify trustworthiness.

Trulyhonest
1.0 out of 5 stars Not for me!
Reviewed in the United Kingdom on 11 September 2021
Verified Purchase
As some people have already reviewed this as a book that is difficult to read or finish - I just want to second that. Numerous times, I just thought I would stop reading it but kept going because I have always read every book I have started! It is a difficult subject matter but the way the book is written evokes little sympathy for the author. I felt it was self indulgent, arty and at times I skipped pages of drivel. The style of writing was not conducive with the subject matter. It had the potential to be a life lesson, a guide for others or a celebration of her husbands life. It did none of that. It has won quite a few awards, I struggle to see why. I sympathise with the author on the loss of her husband in such difficult circumstances - this is the most positive comment I can make.
Read more
Report abuse

William Jordan
4.0 out of 5 stars remarkable and memorable memoir of the illness and death of the author's husband
Reviewed in the United Kingdom on 23 December 2014
Verified Purchase
This book, in four parts, charts the stages in the illness and finally death of the author's husband from a brain tumour. As the illness takes its course, the young son the couple, around one year old when the diagnosis comes in, and around three and a half years old at the time of his father's death, learns to speak and interpret the world as his father loses his capacities - but not his capacities for relationships, or for a long time his ability to work and earn the money on which the family predominantly lives, or above all his being himself.

The author and her husband have an indomitable spirit to keep their relationship and the family alive in the midst of his medical deterioration and the difficulties of treatment - something that comes more and more to the fore as the book progresses and the reader becomes more and more involved with their struggle.
Read more
8 people found this helpful
Report abuse

Anya Tyagi
1.0 out of 5 stars Check your copy on delivery. Lack of quality control on the part of the publisher.
Reviewed in the United Kingdom on 11 December 2019
Verified Purchase
I purchased the book as it was recommended to me particularly as the story parallels my life. I did not read it immediately but waited a few months. So imagine my dismay whilst engrossed in the book accompanied by copious tissue use, that at page 90 the next page was back to 43 and there was a repeat of pages 43 to 90, at the second page 90 it jumped to page 139. I could not read the book because of this and unfortunately, as it was so many months since I had purchased it, I can't ask for a refund or a replacement. There is a serious issue with quality control on the part of the publishers Atlantic books so if you order this book - which is highly recommended - make sure your copy does not have the problem mine has. The only use my copy has is for tearing up and to use to light a fire. I have given the book a one star rating - not because it is not well written and poignant but because I was not able to read it due to the error by the publisher.
Read more
Report abuse

Blue Moon
5.0 out of 5 stars Unflinching personal journey
Reviewed in the United Kingdom on 26 July 2015
Verified Purchase
This is the most incredible soul-baring depiction of illness and death in a small family grouping. The trio of characters, Tom, Marion and their baby son face Tom's brain tumour. The author writes about her personal journey in such an unflinching and beautiful way that you are torn between the poetry of her language and the starkness of the journey. Given how many stages they went through, the remembered pain and emotions are recalled with such intensity that I struggled to see how this was written after the event rather than during. For a book this harrowing it is extraordinarily un-put-downable...
Read more
One person found this helpful
Report abuse

K. Law
3.0 out of 5 stars Couldn't finish it
Reviewed in the United Kingdom on 22 January 2016
Verified Purchase
I feel awkward not giving such a personal story five stars but to be honest I couldn't finish the book despite trying several times over the last month. I lost it where they call the baby a weird name - and say it's not the actual name, I just got too muddled with the style of writing. Shame because the summary was attractive and it seems the sort of boom I would read.
Read more
2 people found this helpful
Report abuse
See all reviews
Back to top
Get to Know Us
Make Money with Us
Let Us Help You
And don't forget:
© 1996-2022, Amazon.com, Inc. or its affiliates