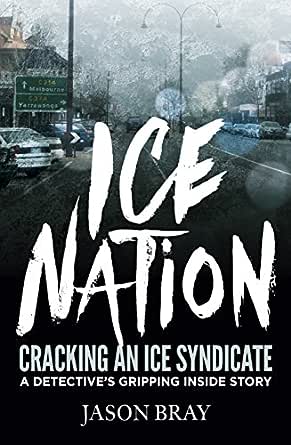 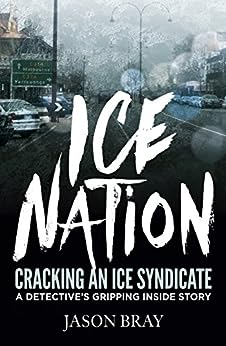 Ice Nation is the blow-by-blow account by the lead investigating officer of efforts to stop a violent ice trafficking syndicate that operated in northeast Victoria and southern New South Wales as the scourge wrought havoc on his patch.

When the young and impressionable sons and daughters of rural Australia were promised power and riches beyond their wildest dreams by an older sadistic boss, they became a highly manipulated and dangerous group of drug dealers. Intent on distributing their own brand of ice and justice in regional communities, they were prepared to attack anyone or anything that stood in their way.

Ice Nation is a gripping snapshot of the epidemic that is taking over rural and regional Australia, following the spiralling trail of destruction as families and friends quickly find themselves out of their depth and out of control.

Detective Jason Bray has spent five years investigating ice trafficking in north-east Victoria. From his experiences investigating some large drug syndicates in small country towns that saw a number of people go to jail, he has been inspired to write a book that details what ice is, how it has grown in popularity and the effects and danger it poses to everyone in our community.

kikko
5.0 out of 5 stars We need to know the truth about "ICE"
16 July 2018
Format: Kindle EditionVerified Purchase
Jason has done a great job bringing the horrific Drug World to the public Eye. We need to know how ruthless these appalling syndicates are. how they suck people in and then completely destroy their lives and their families. no way of getting out of the evil web that has trapped them for life. The Police do such an outstanding job trying to bring these criminals to justice. In Jason's words we could see the struggle the Police have to bring them before the courts. The frustration of the criminals getting off "Time and time again " just because of a smart lawyer or a Technical mistake in the warrant . I hope that people learn to help the police in this important task of ridding our country of these evil groups that are trying hard to destroy the lives of our young people.
Read more
Helpful
Comment Report abuse

Fiona Evans
5.0 out of 5 stars I read it twice!
29 September 2018
Format: Kindle EditionVerified Purchase
Written in a very readable style, this book is full of fascinating, behind-the-scenes Police work. Although Jason Bray paints a believable picture of the criminals involved in the creation of drug syndicates, he also reminds us of their human side. These people are often from good families, who are affected deeply by the dreadful situation their children have put themselves in. I found myself watching for suspicious vehicles, and noting any strangers in my street, after reading this book. I would totally recommend this, and any subsequent books by this author.
Read more
Helpful
Comment Report abuse

Suzzanne
4.0 out of 5 stars Interesting
27 March 2018
Format: Kindle EditionVerified Purchase
Certainly worth the read, I enjoyed this book it was also good reading it because I live in the area.
Read more
Helpful
Comment Report abuse
See all 4 customer reviews
Write a customer review

Readalot
5.0 out of 5 stars Couldn’t put it down
5 April 2018 - Published on Amazon.com
Format: Kindle EditionVerified Purchase
I read this book and as a local not only is it extremely sad to read what was actually going on but the reach of the damage done was so widespread, some of these young kids were knee deep before they even realised.
The book, a debut for the author was extremely well written and very easy to read, at no time did I get bored and it was thoroughly engaging.
Sad topic but hopefully it will educate some of us re: the reality of its severity.

susan jones
5.0 out of 5 stars Fantastic police
17 March 2018 - Published on Amazon.com
Format: Kindle EditionVerified Purchase
It was a very interesting read. I only hope that it is read by many, especially young people so that they may get an insight into this horrendous drug and it's consequences.

Nelle Lombardo
5.0 out of 5 stars EXPLOSIVE READING...
19 April 2018 - Published on Amazon.com
Format: Kindle Edition
This book should be compulsive reading in all schools. This gives an insight into how easy it is to sink down that road of drug addiction and the violent consequences that are inevitable when you cannot pay your debts. It opens up the impact that ones drug addiction can implode onto innocent friends and family. We will never stop the drug trade but if this book can just stop one from slipping down that easy road,... it would be worth it.
Read more
Go to Amazon.com to see all 3 reviews 5.0 out of 5 stars
Get FREE delivery with Amazon Prime
Prime members enjoy FREE Delivery and exclusive access to movies, TV shows, music, Kindle e-books, Twitch Prime, and more.
> Get Started
Back to top
Get to Know Us
Make Money with Us
Let Us Help You
And don't forget:
© 1996-2020, Amazon.com, Inc. or its affiliates