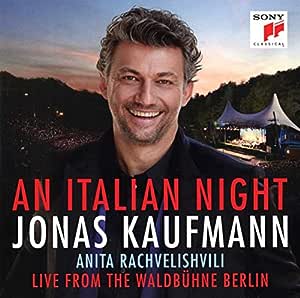 An Italian Night: Live from the Waldbuhne Berlin

Earlier this summer, Jonas Kaufmann, The world s greatest tenor (The Telegraph), performed his most popular Italian repertoire live at Waldbühne, Berlin s outdoor amphitheater. The smash-success live concert was recorded for Kaufmann s new album, An Italian Evening. Kaufmann brought-the-house-down with a succession of hits from his extremely popular Dolce Vita album as well as exciting arias and duets (with mezzo-soprano Anita Rachvelishvili) from the Italian opera repertoire including Volare, Non ti scordar di me and Nessun Dorma. Munich-born singer, Jonas Kaufmann, is without a doubt at the absolute top echelon of the operatic world. He is in extreme demand with the world s most influential conductors, selling out opera houses and concert venues months in advance wherever he performs. In 2011, he received the Opera News Award in New York and was made a Chevalier de l Ordre des Arts et des Lettres in France. He has been awarded Singer of the Year by many prestigious journals including ECHO Klassic and Musical America. Kaufmann is also an internationally sought-after concert and lieder singer. In October of 2011 he performed the first solo recital to be given at the Metropolitan Opera since Luciano Pavarotti in 1994.

operamarty
5.0 out of 5 stars GREAT CONCERT!
18 February 2019 - Published on Amazon.com
Format: Audio CDVerified Purchase
Both singers are at the top in the opera world and were in great voice this night. Excellent choice of selections and won't disappoint opera fans!
Read more

nb
4.0 out of 5 stars cd stopped playing at track 10
31 October 2019 - Published on Amazon.com
Format: Audio CDVerified Purchase
once I cleaned it myself all tracks played and I enjoyed them all very much
Read more

Michel E. Spichiger
5.0 out of 5 stars Great voice
20 October 2019 - Published on Amazon.com
Format: Audio CDVerified Purchase
He is magnificent and his operas are outstanding
Read more