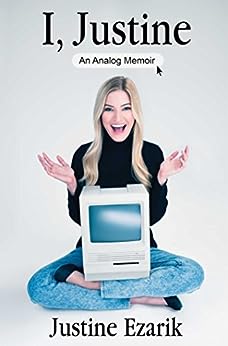 by Justine Ezarik (Author) Format: Kindle Edition
See all formats and editions
Sorry, there was a problem loading this page. Try again.
A one-woman media phenomenon and a leading YouTube influencer takes readers behind the camera, and deep inside her world.

Justine Ezarik has been tech-obsessed since unboxing her family’s first Apple computer. By sixth grade she had built her first website. A decade later, she became one of the Internet’s first—and most popular—“lifecasters,” inviting people around the world to watch her every move, twenty-four hours a day, seven days a week. But it was a one-minute video about an itemized AT&T bill that gave Justine her first taste of viral success: Within ten days of release, her “300-page iPhone bill” had garnered more than 3 million views and international media attention. These days, iJustine is a one-woman new media phenomenon: The popular techie, gamer, vlogger, and digital influencer has an army of nearly 3.5 million subscribers across multiple YouTube channels, with total views approaching half a billion.

Now, Justine is giving friends and fans a look behind the scenes, sharing never-before-told stories about the hilarious (and sometimes heartbreaking) reality of sharing your life online. With her trademark wit and delightfully weird sense of humor, Justine delivers an inspirational message in support of creativity, entrepreneurship, and the power of staying true to yourself, while reminding readers that the Internet is a very small world—you just never know who you’re going to meet.
Read more
Previous page
Next page
Due to its large file size, this book may take longer to download

“a real, page-turning book about her life behind the screen.” ― USA Today --This text refers to an alternate kindle_edition edition.

Justine Ezarik (a.k.a. iJustine) is a gadget and technology expert, actress, host of AOL's HardWired, and one of the most subscribed-to personalities on YouTube. She has partnered with an array of corporate clients, including Microsoft, Intel, Mattel, Nikon, Ford, GE, Lionsgate, and Samsung. Recently, she starred in the "District Voices" web series, promoting the release of The Hunger Games: Mockingjay Part I, and an international campaign for Call of Duty: Black Ops 2, directed by Guy Ritchie. Justine has been nominated for two Teen Choice awards, four Streamy Awards, and is the winner of the People's Voice Webby Award for Best Web Personality/Host. She has been named one of The Hollywood Reporter's 50 Most Powerful Digital Players, was called the "most influential person online" by Fast Company, and ranked No. 6 on The Daily Beast's 2012 Digital Power Index (one of only nine women, including Sheryl Sandberg and Arianna Huffington, to make the list). Justine has also appeared on shows such as The Talk, FOX's Studio 11, The Rachael Ray Show, The Vampire Diaries, Criminal Minds, Law & Order, E!, MTV, Entertainment Tonight, The Insider, and was co-host of NBC's reality challenge show, Escape Routes. --This text refers to an out of print or unavailable edition of this title.

4.8 out of 5 stars
4.8 out of 5
222 global ratings
How are ratings calculated?
To calculate the overall star rating and percentage breakdown by star, we don’t use a simple average. Instead, our system considers things like how recent a review is and if the reviewer bought the item on Amazon. It also analyses reviews to verify trustworthiness.

Marie
4.0 out of 5 stars Good book, personal both good and bad
Reviewed in the United Kingdom on 19 August 2018
Verified Purchase
She takes us from the start of her love of tech to the present day, we follow her in ups and downs, bad jobs and great friends, most of the book is filled with a happy outlook on life, some times there seem to be a lot of anger and residual resentment - completely understandable, it's hard to keep a happy outlook on life with death threat and SWAT teams invading your life. Its a good book, worth a read and its nice to support a woman like Justine so she is able to make the world a better place
Read more
One person found this helpful
Report abuse

RobertM
5.0 out of 5 stars Now I know what makes her tick, I think!
Reviewed in the United Kingdom on 14 September 2018
Verified Purchase
Enjoyed reading the book, iJustine never gave up during setbacks, I fully recommend this book to all interested in IT.
Read more
One person found this helpful
Report abuse

Finn Casey
5.0 out of 5 stars great book!
Reviewed in the United Kingdom on 22 March 2021
Verified Purchase
the only book that i actually read fully and i loved it!
Read more
Report abuse
See all reviews
Back to top
Get to Know Us
Make Money with Us
Let Us Help You
And don't forget:
© 1996-2022, Amazon.com, Inc. or its affiliates