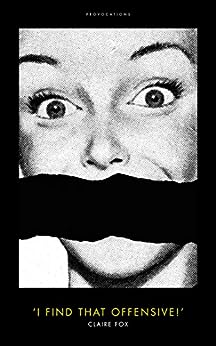 'An ambitious new series that tackles the controversy of the topics explored with a mixture of intelligence and forthright argument from some excellent writers.' - The Observer --This text refers to the hardcover edition.

Claire Fox is the director of the Institute of Ideas, which she established in 2000 to create a public space where ideas can be contested without constraint. She convenes the yearly Battle of Ideas festival, established the prestigious nationwide Debating Matters competition for sixth-form students and coorganises the Institute of Ideas' residential summer school, The Academy: 'University as it should be'.A panellist on BBC Radio 4's The Moral Maze, Claire is regularly invited to comment on developments in culture, education and the media on television and radio programmes such as Question Time and Any Questions? She is also a columnist for the Times Educational Supplement and Municipal Journal. --This text refers to the hardcover edition.

4.4 out of 5 stars
4.4 out of 5
97 global ratings
How are ratings calculated?
To calculate the overall star rating and percentage breakdown by star, we don’t use a simple average. Instead, our system considers things like how recent a review is and if the reviewer bought the item on Amazon. It also analyses reviews to verify trustworthiness.

Have Standards
TOP 500 REVIEWER
5.0 out of 5 stars Painful, gripping, wearying and real. If you care about freedom of speech and expression in the West, buy this book.
Reviewed in Australia on 30 December 2017
Verified Purchase
If you care about Free Speech or Freedom of Expression in the West, buy this book. The extended list of regressive left shennanigans (particularly on college and school campuses) can be wearying but the book ends on the high note with advice and suggestions for both sides (and centrists) on how to co-exist in modern, western societies.
Read more
Helpful
Report abuse

Amazon Customer
5.0 out of 5 stars Saw its rise and now awaiting its fall.
Reviewed in Australia on 10 September 2019
Verified Purchase
Three cheers for Claire Fox. I am 93 years old and have witnessed the decline of free speech and the emergence of easily offended self righteousness Snowflakes. We need more people like the author to articulate the social remedy.
Read more
Helpful
Report abuse

Rbritt
4.0 out of 5 stars A good read. Not for the 'politically correct'.
Reviewed in Australia on 15 July 2016
Verified Purchase
A refreshing publication. A must read for academics, college students and for those who need to toughen up for the real world!
Read more
One person found this helpful
Helpful
Report abuse
See all reviews

Bluecashmere.
5.0 out of 5 stars Critical Issues.
Reviewed in the United Kingdom on 1 August 2016
Verified Purchase
This is a very important book. It may not have quite the depth of Mick Hulme’s “Trigger Warning”, - strongly recommended! - but it is incisively argued in its focus on a very real threat to our liberty. Behind all lies our craven acceptance of infringements to our rights to free speech. Here, Claire Fox takes as her starting point the Charlie Hebdo atrocity and makes us aware that for all the “I am Charlie” protests, major public figures from The Pope upwards or downwards qualified their references to this brutal attack on our basic freedoms with mealy-mouthed qualification.

Ms. Fox goes on to discuss the alarming state at our universities, places which should enshrine openness to a spectrum of debate, not close the doors on anyone whose views are not sufficiently politically correct or who might be mildly disturbed by hearing opinions that do not coincide with their own. Do those who require the mental toughness to qualify and to study subjects such as Law and Medicine lack the resilience to hear views different from the received orthodoxies of the nanny state?

This, Ms Fox claims, is the inheritance of the child-centred education fostered in university education departments and reinforced by the likes of the NUT. She is right. Where is the resilience? Where is the generosity and humility to listen respectfully to that which initially we find repellent? When we retreat into this narrow mean-spirited and humourless stance we abandon the most vital principles upon which our civilisation has been built. What a retreat from the enlightenment when speakers are barred from universities because students must be protected rather than challenged.

From the ludicrous teaching of friendship skills to trigger warnings to alert students that what they read may cause them hurt! Of course, the perpetrators of this farce are disingenuous. They are not the meek victims they would have us believe. All is a cover to silence unpalatable political, literary and social issues. The Rhodes statue must come down; it is like Russian politicians disappearing from photographs during the Soviet era. The “meek victims” are in fact cold-blooded arrogant and authoritarian. They have more in common with Stalin’s regime than with civilised democratic values. We would well to pay attention to Ms. Fox; it is to be hoped that it is not too late for the wheel to turn.
Read more
44 people found this helpful
Report abuse

Nikos S
5.0 out of 5 stars Putting SJWs and 'Generation Snowflake' into a historical context
Reviewed in the United Kingdom on 8 August 2016
Verified Purchase
Nowadays, one cannot keep track of the many weird or scary stories coming out of universities, schools and the public sphere in general that have to do with absurd calls for censorship and for clamping down any short of ‘offensive speech’. From the persecution of Tim Hunt to calls for space spaces and trigger warning in universities, people dealing with education or the world of ideas in general feel they are walking on thin ice. Claire Fox tries not only to provide an overview of the various phenomena around today’s uneasiness with free speech and strong convictions, but also to put them into a context. Instead of the easy option of pointing the finger to ‘Social Justice Warriors’ or the ‘Generation Snowflake’, she examines the cultural zeitgeist that gave rise to such phenomena.
The books starts with the interesting ‘tales of two schools’: her personal experience with confronting two superficially different audiences of sixth-former students on two different occasions and debating two different topics, but with one common outcome: young people being unable to cope with a different opinion and even collapsing in tears when confronted with ideas that question their certainties.
Part I deals with an overview of various different stories in a variety of environments, from campus to twitter, where free speech has been under attack, emphasising the scary shift that it is not anymore about what one objectively states, but how this is perceived by any individual that could suffice for one to bear the label of racist, sexist, homophobic, rape apologist etc. She deals with various issues, such as ‘micro-aggressions’, the rise of the ‘victimised subject’ and the negative outcomes of identity politics being reduced to a tribalist warfare of competing claims for the status of the victim.
Part II traces the rise of the ‘generation snowflake’ to tendencies that have been inherent in our society for the last decades, such as the centrality of health and safety in public policy, the corrosion of adult authority in education and within the family, moral and philosophical relativism and the lowering of expectations from what an individual is capable of achieving and/or overcoming, the ‘everyone is a winner’ attitude etc. She reaches an interesting conclusion…all these forces have created a trend of individuals that, responding to the environment they grew up, see themselves on the one hand as vulnerable and incapable of taking life in their own hands, yet on the other hand express a self-righteous narcissistic attitude of having things in their own way, irrespective on whether they have earned it or not.
Part III is an open letter to ‘generation snowflake’, followed by another one to the ‘anti-snowflakers’ on how not to oppose the phenomenon, followed by a call to arms for universalist values that could create an atmosphere where freedom and the progressive universalist ideals could flourish.
The book is directed to the wider public and at the same time it is of a high intellectual standard and one can find many helpful references to data and academic works. It is a book that contributes towards making sense not only of the specific topic it deals with, but also of the intellectual attitudes of our times.
Read more
9 people found this helpful
Report abuse

Stephen Parker
4.0 out of 5 stars Very Funny
Reviewed in the United Kingdom on 20 January 2020
Verified Purchase
Well written, and very funny. I emphasise "well written", because it's rare now to find a book, other than one written by an avowed academic and linguistic purist, that hits you as such. A pleasure, therefore, for me, whatever the subject-matter!
"I Find That Offensive" hits the target for me in many ways: it's timely, thoughtful, daring, and spot on: I laughed out loud about every two minutes.
My only disappointment was that I felt it ran out of steam a bit in the final two chapters, but even considering this minor shortcoming, it's a book I read, and will re-read, with pleasure and great enjoyment.
Read more
Report abuse

Dene
5.0 out of 5 stars By Addressing a Problem So Pervasive, This Book Could Go On Forever
Reviewed in the United Kingdom on 16 October 2017
Verified Purchase
A concerning insight into the pervasiveness and relentless onslaught of political correctness, and its surreptitious war on free speech. This text lays out the root cause of many of the issues that Europe and the West in general is facing, that of the suppression of expression and ideas. The many examples given in this book are just a drop in the ocean, but nevertheless provide and interesting insight into what is happening across university campuses throughout the West, and also in wider society. Highly recommend.
Read more
5 people found this helpful
Report abuse

Mr. Roger Eden
5.0 out of 5 stars Describes Generation Snowflake with troubling accuracy and detail
Reviewed in the United Kingdom on 21 December 2016
Verified Purchase
Really very worrying. Hearing of "safe" rooms in Universities with cuddly toys and warning stickers for classic works of literature, this book made me feel even worse. Well written and well worth the read.
Read more
7 people found this helpful
Report abuse
See all reviews
Back to top
Get to Know Us
Make Money with Us
Let Us Help You
And don't forget:
© 1996-2021, Amazon.com, Inc. or its affiliates