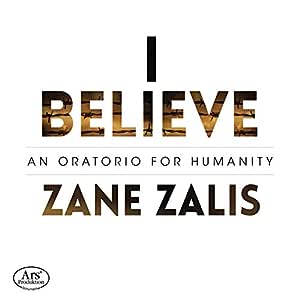 Canadian composer Zane Zalis' Oratorio 'I Believe' is a symphonic contemporary oratorio and has been performed to sell out audiences in Winnipeg, Stuttgart, Toronto and New York and to date has been seen by about 20,000 people. i believe is a concert work about the Holocaust. Using music and words, a story of hate, survival and hope is told from within the minds of the victims and perpetrators. It is a singular large scale work divided into 12 movements using the artistic forces of a symphony orchestra, large mixed chorus, childrens chorus, ensembles, soloists and narrator. The artistic architecture is influenced by a host of sources all in service to capture the essence of a story that needs to be told, in a plea for awareness, understanding and peace. The Holocaust encompasses simultaneously the most depraved human behaviour and the most sublime human behaviour; it is complex and simple; universal and particular. It is not to be forgotten nor should its import be diluted in any manner. The Holocaust is a telling commentary about humanity by humanity and thus it is important and necessary to share this most human story of despair and hope with our communities and especially our youth.