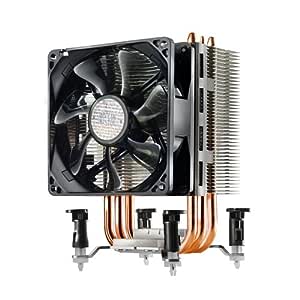 mmmmna
1.0 out of 5 stars AM2 chip is MUCH bigger than contact of cooler
22 January 2020 - Published on Amazon.com
Verified Purchase
I have plenty of clearance around the CPU cooler, no issue with sizes, no issue with heights.

The latch is an assembly which is really difficult to master, being 2 pieces which must nest together UNDER the huge tower of fins, AND be connected onto the motherboard cooler mounting frame, and only THEN should you rotate the latch all the while holding everything with ONE hand. Not at all easy to do (but probably much easier to do if the motherboard is NOT in a case).

But then consider these 4 critical points:

1] My Athlon 64 X2 6000 is a huge chip compared to the cooler mounting base, the cooler contact area barely covers 3/4 of the chip surface. Maybe less?

3] When the cooler is 'mounted', you stand a chance of one of the heat pipes NOT making full contact with the CPU, because the cooler can easily be placed to one side.

Yet this next point takes all the above moot:

4] The latch arm will NOT rotate completely due to mechanical interference (a design error). Which means the latch arm will spring open when you are simply looking at it. It did so for me several times and I was almost going to use a twist tie to hold it in an ALMOST LATCHED position.

After I added all 4 of the above problems, I reassembled the original CPU cooler I had been using - this one cannot and will not be used in my system, it is totally inadequate for my needs.

DO NOT BUY this cooler unless you can machine it to correct the 2 design issues AND you have a smaller chip.

Denverdude
5.0 out of 5 stars A MUST buy at this price point. If you intend to run games, or your room is warm, spend the money.
14 October 2015 - Published on Amazon.com
Verified Purchase
I decided finally buy a CPU cooler, after the demo for Star Wars Battlefront caused my CPU to reduce voltage to prevent over heating. Using AMD's Overdrive utility to see where the bottleneck\issue was, the thermal margin on my budget build AMD FX-6300 processor was the issue. While running the game, it would reduce voltage, the graphics would freeze and I would get sniped\killed.

After reading lots of reviews, I finally settled on this cooler. Multiple reviews show this as being superior or equal to the more expensive 4 pipe Cooler Mater EVO 212. Bonus, I did not need to install the backplate, so the MOBO stayed in place.

Replacing the cooler was easier than anticipated. After removing the old one with the clip, I wiped the CPU with rubbing alcohol and lint free cloth. I test fitted the new cooler with the clip, instead of the screw in mounts. While not as "accurate" as the hard mounts, it made for a much easier installation. Plus I know for sure that the Heatsink is tightened to the CPU properly, and not under-tightened. This was it ensures a better contact with the CPU.

I applied my Arctic Silver Ceramique ( accidental purchase when buying the PC originally, instead of Arctic Silver 5). This DOES include Cooler Master thermal paste, but I had the Arctic laying around. I "tinted" the surface of the cooler after removing the plastic. This was done to ensure that the grease conducted the heat with no gaps.

"Tinting", is where you apply a small amount, then wipe it back and forth to fill in any gaps\ridges. You apply it, then use a credit card\keycard to spread it until all gaps are filled and the surface is visible. You want the thinnest film left on there. I applied a grain of uncooked rice size dot directly to the CPU. I set the Cooler directly on the CPU and clipped it in. The clips are kind of a pain, but again the trade off is not having to worry if it was tight\loose enough on the CPU. Plus if I need to remove it quickly, no screw driver needed.

I plugged the fan in, powered it up, and opened CPU intensive tasks, I am running chrome, pandora, excel, and I have the overdrive utility testing the system. Prior, the CPU would be very very angry. It would beep incessantly as it ran out of thermal margin (Temperature left before shutdown). For the AMD FX-6300, it shouldn't run over 65c or 149 f.

With the stock cooler, it would EASILY hit 65 and reduce voltage\performance. In AMD Overdrive, there would be NO thermal margin, with the new cooler, and grease, there is always at least 20c\68f margin. The AMD autotune got up to 4400mhz and STILL had the 20 c margin! (it would only get to 4100 then crap out with the stock cooler).

This was all while writing this review and a few minor background processes.

The grease will break-in, in the next 25 hours, and the system should run a few degrees cooler. This cooler used to run $45+ when it came out. There is really only a few degrees Celsius difference between this and WAY more expensive coolers. This is a great deal, and in my opinion, a must purchase. The CPU fan is MUCH quieter than the stock CPU fan, which would kick in ALL the time. The fan points right at my case fan, which helps to remove the heat immediately.

There is an option to attach another fan to cooler, but a few tests out there show that this doesn't really help appreciably to cool the CPU. I chose to not add the second fan, and at this performance I don't need to.

The original heatsink\fan combo is a joke. I should have taken side by side photos before installing, but I didn't. Trust me, the Cooler Master is easily 4 times larger. The other good thing is, this fits in my case. The CM EVO 212 MIGHT have fit, but this leaves a solid 2", plus it over $10 less.

Pros:
Cheap! I paid $18 for this. Originally this was $45+
Easy to install, just clip it in!
System runs 20C cooler and never hits its thermal limits, even in overclock!
You can add a second fan to it.

Cons:
Not as fancy as some other coolers.
Nothing else!
Read more

Sherman Oakes
4.0 out of 5 stars Instructions could be better
26 August 2019 - Published on Amazon.com
Verified Purchase
The box says that this can be used on LGA 1151, but the instructions only mention other LGA versions. Follow the instructions for the LGA 115X.

It's pretty easy to install once the instructions are decoded and one figures out that for Intel processors the main difference is a subtle positioning of the arms that hold the push-pin connectors to the motherboard.

And remember to have those push-pins rotated to the proper "insert" position before trying to push them it, else they won't go. A long screwdriver is needed to push the two pins on the fan side of the heat sink. (And remember to *NOT* turn those pins in accord with the arrows printed on them - those arrows are to *remove* the heat sink.)

No backing plate is required on the back of the motherboard, so this cooler can be used as a replacement to an already built machine. (But because this is rather taller than the stock Intel fan, one should measure the clearances in the particular case being used.)
Read more
Go to Amazon.com to see all 704 reviews 4.1 out of 5 stars
Get FREE delivery with Amazon Prime
Prime members enjoy FREE Delivery and exclusive access to movies, TV shows, music, Kindle e-books, Twitch Prime, and more.
> Get Started
Back to top
Get to Know Us
Make Money with Us
Let Us Help You
And don't forget:
© 1996-2020, Amazon.com, Inc. or its affiliates