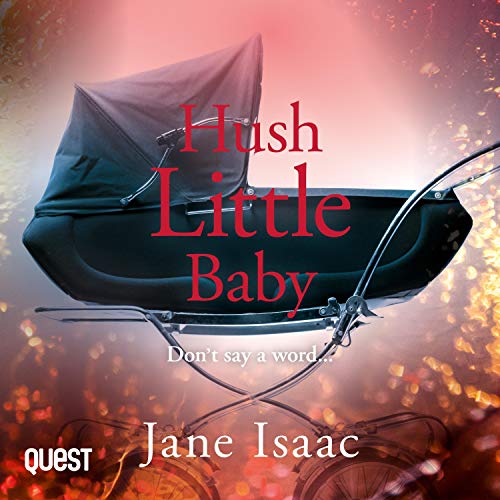 4.3 out of 5 stars
4.3 out of 5
272 global ratings
How are ratings calculated?
To calculate the overall star rating and percentage breakdown by star, we don’t use a simple average. Instead, our system considers things like how recent a review is and if the reviewer bought the item on Amazon. It also analyses reviews to verify trustworthiness.

Wendy
4.0 out of 5 stars Loved DC Chamberlain
Reviewed in Australia on 7 September 2020
Verified Purchase
I think this book was better than book 2, book 1 was a great read. I like a book that you get involved with straight away and this last novel did, however, I couldn't help but feel a tad angry with DC sister, very unforgiving.
Read more
Helpful
Report abuse

Irene Taylor
4.0 out of 5 stars Great read.
Reviewed in Australia on 20 December 2020
Verified Purchase
I really like the way Jane Isaac writes her novels. Her use of descriptive language makes a very visual experience. Hush Little Baby was a great read
Read more
Helpful
Report abuse

audrey
TOP 500 REVIEWER
4.0 out of 5 stars like this author
Reviewed in Australia on 24 January 2021
Verified Purchase
I do like this author and this was a good read.
However I did feel the ending was a bit strange
Read more
Helpful
Report abuse

Stina
TOP 50 REVIEWER
4.0 out of 5 stars An Enjoyable Read
Reviewed in Australia on 10 September 2021
A crime thriller that's a police procedural with a touch of domestic suspense, HUSH LITTLE BABY is the third in the DC Beth Chamberlain series. I was glad to find this book so much better than the previous one although it still felt a little drawn out in parts, weighing it down in the middle. Still, it was a relatively enjoyable read.

Teenager Jordan skips registration and skives off school to hunker down at a building site for a cheeky cigarette. She did not expect to make the discover that she did. The bare arm of a child protruding from the the rubble surrounding a block of concrete. She screams, alerting the construction crew on site, and scarpering as the builders approach.

DC Beth Chamberlain is enjoying a day off with her sister Eden and her daughter Lily when her mobile rings. It can only mean one thing. Work. Her sergeant and lover, DS Nick Geary, informs her of the discovery of a infant's remains encased in a block of concrete. Almost at once, her superiors recall a case from fifteen years previous. Alicia Owens disappeared along with her pram after her mother Marie, not wanting to disturb the sleeping three month old, had left it unattended to pick up a few groceries. When she returned, Alicia had gone alone with her pram. A search prevailed the pram but the attachable car seat and Alicia's change bag were nowhere to be found.

Could this be baby Alicia?

The investigation into identifying the infant's remains lead to Beth and Nick informing the Owens family to prepare them for the possibility of it being Alicia. What ensues is the re-examination of the old case and the opening up of old wounds. Acting as Family Liaison Officer to both parents despite the couple divorcing twelve years before, Beth takes Marie and her former husband Daniel's DNA to assist in identifying the remains. But what none of them expect is what the tests throw up...

But the case at hand is not the only thing on Beth's mind. At the conclusion of the previous book, they had learned that the serial killer they had imprisoned had somehow escaped custody and no one knew where he was. If he was smart, Dale Yates would be a long way from here. But then he had a score to settle and his own sense of warped justice to deliver. Since receiving this news, her superior DCI Freeman had ensured that Beth was never alone with Nick always remaining close by. But since his promotion to acting DI for the investigation into identifying the child's remains, his work hours have been somewhat extended leaving Beth to return home at night alone. Then little things started happening. Her side gate left unlocked. The sense of someone having been in her house. The care with the cloned plates tailgating her. Was this all just a coincidence? Or has Yates come for her?

As the first case is solved and wrapped up, Beth finds herself thrust to the forefront of another investigation...this time with her as a victim. The twist, which sees an unexpected turn of events concerning her sister, is a shock and leaves Beth reeling.

HUSH LITTLE BABY is a gripping thriller which focuses on both the police investigation as well as those of the victims and an anonymous person seemingly stalking the investigation. It's page-turning and entertaining enough to keep you engaged but the pace did dip a little in the middle before it raced to the end.

An enjoyable read, HUSH LITTLE BABY can be read as a standalone though it probably helps to read the preceding books to get a full understanding of the ongoing backstory.
Read more
Helpful
Report abuse

marnie | once upon a time book reviews
TOP 50 REVIEWER
5.0 out of 5 stars A brilliant addition to the series!
Reviewed in Australia on 3 August 2020
For this third instalment in the DC Beth Chamberlain series, Jane has crafted a harrowing story that heats up a 15 year old cold case, when the body of a baby is found entombed in concrete on a construction site.

The story is hard hitting and confrontational, but with Jane’s experience as an established author, she deals with it extremely well. Nothing in the story is sugarcoated, which does make for a gut wrenching, realistic and compelling read.

With each book that is released, I just love Beth more and more. She is the heart and soul of the series and is always such a pleasure to read. Her mettle is definitely tested this time around, when the case becomes personal in a terrifying way and that also brings with it an evil back from her past.

What makes this series stand out for me is that it is told from Beth’s perspective, as a family liaison officer and not from a police detective’s, which does make for a point of difference and a nice change.

Jane Isaac is on fire with this series and Hush Little Baby is another outstanding addition to it. Each story can be read as a stand-alone and is easy to follow along, but it does make for a better reading experience starting with book one.

Hush Little Baby is a gripping, thrilling and twisty read that I could not get enough of which I highly recommend and I can’t wait to see what Jane comes up with next! Thanks for another brilliant read Jane.

Thank you to NetGalley, Aria Fiction and Jane Isaac for allowing me to read an advanced copy of Hush Little Baby which I have reviewed honestly and voluntarily.
Read more
Helpful
Report abuse

Monica Mac
TOP 100 REVIEWER
4.0 out of 5 stars Shocking and complicated.
Reviewed in Australia on 26 July 2020
Wow, there was a lot going on in this book! This is the third book in the series and although it would be a good idea to read the others first, this book can be read as a standalone.

The body of a baby is found on a building site and it needs to be determined who the baby is. Alica disappeared 15 years ago and her parents have been grieving for her since - separately though, as they broke up. Could this baby be her, all this time later?

Other than trying to figure out who killed this baby, Beth needs to sort out her messy personal life and keep an eye out for an escaped serial killer. Yep, someone clearly decided that she needed more to do!

Jane Giddings
TOP 500 REVIEWER
5.0 out of 5 stars Hush little baby....
Reviewed in Australia on 28 July 2020
Verified Purchase
Excellent read thank you. This book was mind blowing and too hard to put down. So many twists and the suspense. Thought I had worked out ‘who did it’ in both situations.. but no lol. The book is amazing and I highly recommend this book to everyone.
Read more
Helpful
Report abuse
See all reviews

Homeburd
5.0 out of 5 stars Highly recommended
Reviewed in the United Kingdom on 23 July 2020
Verified Purchase
This is book 3 in the DC Beth Chamberlain series and fans of the earlier books will love this one. While I wouldn’t advise it, anyone new to the Beth books would find this works as a standalone. If I have any complaint about this series it’s that you get so drawn into the stories you read quicker and quicker and then you are done, usually within a day. The last few chapters of this one were nail bitingly tense. I really enjoy Jane Isaac’s style of writing and she is able to tackle some dark topics and still keep it palatable for the reader. I hope there will be further books in the series as in some ways it feels like we are just getting started. Highly recommended.
Read more
3 people found this helpful
Report abuse

Mrs A
5.0 out of 5 stars Another brilliant book
Reviewed in the United Kingdom on 6 September 2020
Verified Purchase
I love Jane Isaac’s books and this one didn’t disappoint. She very cleverly draws in the reader so it’s difficult to put the book down because you just need to keep reading to see how this case comes to a conclusion and just when you think the book has come to an end you are left getting drawn into something else. Jane’s books are cleverly written and extremely well researched so that police procedures are up to date. Although this book can be read as a stand-alone I would recommend reading the first 2 in the series. You won’t be disappointed.
Read more
One person found this helpful
Report abuse

Miriam
5.0 out of 5 stars Gripping read.
Reviewed in the United Kingdom on 5 August 2020
Verified Purchase
Crime fiction is my favourite genre and lately I had decided to take a break and read other genres but when I was looking through my TBR for my next read, I came across this book and decided to see if it would get me back and it worked, the only time I left my kindle down was when I was at work and even then I had the occasional sneaky read. I have read book two of the series and for some reason, I still have the first one to get around to.
Read more
One person found this helpful
Report abuse

Diane Lowe
5.0 out of 5 stars Gripped from page one!
Reviewed in the United Kingdom on 2 August 2020
Verified Purchase
Only recently discovered Jane's books and so glad I did. This series is gripping and I have read each one in the space of a day. Really good, ingenious plot and twists along the way. You won't be disappointed with this but be warned....housework may be neglected!
Read more
One person found this helpful
Report abuse

I Robinson
5.0 out of 5 stars Higly recommended
Reviewed in the United Kingdom on 17 October 2020
Verified Purchase
Jane writes using policing knowledge that doesn't bog the reader down in mundane procedure. This makes for a great character driven storyline that captivates the reader's attention from start to finish. Another great book in a fine series with a unique character and role within the police.
Read more
Report abuse
See all reviews
Back to top
Get to Know Us
Make Money with Us
Let Us Help You
And don't forget:
© 1996-2021, Amazon.com, Inc. or its affiliates