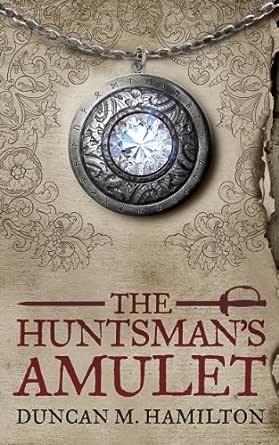 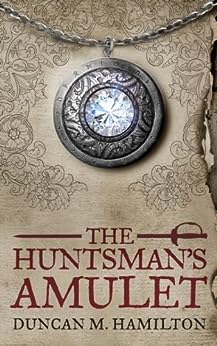 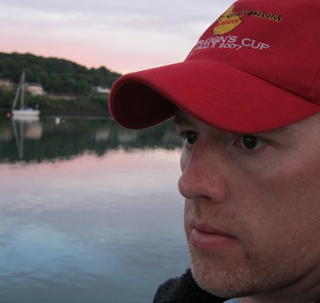 The Huntsman's Amulet (Society of the Sword Book 2) Kindle Edition

Andrea Jones
2.0 out of 5 stars Two Stars
Reviewed in Australia on 7 August 2015
Verified Purchase
Could have been a good storg but lacks depth and flow
Read more
Helpful
Comment Report abuse
See all reviews from Australia

Pauline M Ross
4.0 out of 5 stars An action-packed follow-on
Reviewed in the United Kingdom on 7 January 2014
Verified Purchase
That difficult middle book of the trilogy? Nope, no problem. Just send the hero off in a different direction altogether, with a bit of seafaring and... pirates! What could be better than chasing around the oceans, with a sea battle and a storm and... and... You can probably fill in some of the blanks here. Very little of this took me by surprise, but that doesn't make it any less of an enjoyable romp.

The plot is, in many ways, a choppier affair than in `The Tattered Banner'. Main character Soren starts off looking for missing girlfriend Alessandra, then gets distracted by a search to find out more about his Gift (the mysterious power that overtakes him during a fight and makes him super-fast). That thread ends abruptly, and then a storm at sea leaves his ship vulnerable to pirate slave-traders, when that is resolved he falls in with an old acquaintance and sets off after the pirate... and so on. This kind of episodic story has some advantages, and there's never a dull moment, but it does feel sometimes as if Soren is passively being pushed around by events. He ends up bouncing around all over the place, like a glorified travelogue of his world, and while the places he visits are interesting in themselves, the speed with which he hops from one to another, and the ease with which problems are solved, dulls the impact.

The most interesting place, to my mind, was the mysterious island in the centre of the ocean where there are the remains of a great city. The place is tainted with magic, so it's dangerous to visit, and the peculiar and foreboding atmosphere of it is conveyed very well. But then, it becomes unexpectedly easy and frankly an excuse for a big info-dump, so in the end it's a bit of a let-down.

The rest of the book is a giant boys-own adventure, with regular outings for Soren's talent with a sword. In the first book, the fights, and the outbreaks of magic that accompanied them, were a highlight. Here much of the awesomeness is lost and the fights become rather mundane, as Soren tries to gain full control of his power so that it doesn't overwhelm him. And it has to be said that the sheer number of times the swords come out makes this aspect of the book repetitious.

If this makes it sounds as if I was disappointed, well, perhaps I was, just a little. I would have liked more of the magic, more of the mind-blowing Gift-infused moments like the Belek battle in the first book (which remains an unforgettable image, still vivid in my mind), more times when things went wrong and I was taken by surprise. Everything was just a tad too easy and predictable. On the other hand, this was a cracking action-adventure, elegantly written and enjoyable from first to last, with no problems picking up the threads of the story from book 1, and no sign of middle-book doldrums. Four stars.

Kindle Customer
5.0 out of 5 stars The Tale Continues.....
Reviewed in the United Kingdom on 14 March 2017
Verified Purchase
Following directly on from the first book we follow our hero as he continues his search for his friend and understanding of his powers. The world is well conceived and the plot, although fairly simplistic, is not without interest.

Matthew Halligan
5.0 out of 5 stars Brilliant
Reviewed in the United Kingdom on 28 January 2015
Verified Purchase
The 2 of 3 and it as good as the first read in 3 days I was so engrossed in it. Already looking forward to the third which I am going to get now.
Read more
Helpful
Sending feedback...
Thank you for your feedback.
Sorry, we failed to record your vote. Please try again
Report abuse

Kindle Customer
5.0 out of 5 stars good stuff...
Reviewed in the United Kingdom on 9 February 2014
Verified Purchase
Not sure if there is going to be more to this but I really hope so , I would very much look forward to it.
Read more
Helpful
Sending feedback...
Thank you for your feedback.
Sorry, we failed to record your vote. Please try again
Report abuse
Load more international reviews

c mc cabe
4.0 out of 5 stars better and more gripping than his first novel
Reviewed in the United Kingdom on 24 April 2014
Verified Purchase
This second book of the series was better, sharper and more focussed than the first - I finished it over a weekend and will be ordering the next in the series once released. This is really strong storytelling!
Read more
One person found this helpful
Helpful
Sending feedback...
Thank you for your feedback.
Sorry, we failed to record your vote. Please try again
Report abuse

Shamann
5.0 out of 5 stars Five Stars
Reviewed in the United Kingdom on 13 March 2017
Verified Purchase
Good follow on to the original story; well worth a read
Read more
Helpful
Sending feedback...
Thank you for your feedback.
Sorry, we failed to record your vote. Please try again
Report abuse

David S Savage
4.0 out of 5 stars Good
Reviewed in the United Kingdom on 5 January 2015
Verified Purchase
I will try more of his books
Read more
Helpful
Sending feedback...
Thank you for your feedback.
Sorry, we failed to record your vote. Please try again
Report abuse
Load more international reviews

A. Mohammed
5.0 out of 5 stars Excellent Story Telling
Reviewed in the United Kingdom on 11 June 2014
Verified Purchase
Genuine action, adventure, intrigue - couldn't put it down. Believable charachters that you actually give a damn about that grow in front of your eyes.
Read more
Helpful
Sending feedback...
Thank you for your feedback.
Sorry, we failed to record your vote. Please try again
Report abuse

Kindle Customer
4.0 out of 5 stars A stirring read (slight spoiler)
Reviewed in Canada on 31 January 2014
Verified Purchase
I enjoyed this novel, picking up where the first left off, you follow a rather realistic "hero" trying to fix what he can.

The only thing I felt a little let down was I was sure this would be a three set. you could see yourself closing to the end of the book, and yet, it felt as if things were not closed up enough. More than enough open threads to weave into a third book if played right. And then it ended. The final page or so cleaned up everything he cared about, but I found myself asking about secondary characters whom I'd known in passing.

while the case could be made for a third novel, at this point and with this ending it would truly feel as an after thought.
Good read, but not great.
Read more
Helpful
Sending feedback...
Thank you for your feedback.
Sorry, we failed to record your vote. Please try again
Report abuse

not that good
2.0 out of 5 stars running out of gas
Reviewed in Canada on 14 July 2014
Verified Purchase
I enjoyed the first book, it was an interesting plot - nothing earth shattering but a good teen audience novel. Problem with the second book's been identified by some of the other reviews, the end of the book seems rushed, pace and language got thrown by the wayside - awkward over use of adjectives, and final moments of the book seemed to be a cole's notes summary rather than an a full length novel. I won't be purchasing the 3rd.
Read more
Helpful
Sending feedback...
Thank you for your feedback.
Sorry, we failed to record your vote. Please try again
Report abuse

Amazon Customer Jake
1.0 out of 5 stars Trite
Reviewed in the United Kingdom on 9 April 2014
Verified Purchase
Predictable and banal. Characters shallow and plot juvenile. Disappointing. Followed the lines of this genre, unfortunately the poor writing style and plot prevent this book from being at all compelling.
Read more
One person found this helpful
Helpful
Sending feedback...
Thank you for your feedback.
Sorry, we failed to record your vote. Please try again
Report abuse

Amazon Customer
2.0 out of 5 stars Ending out of left field with so much possibility left undone
Reviewed in the United States on 5 February 2014
Verified Purchase
This series started with a great idea, and introduced interesting characters, and over-arching plot of world dominance, a forgotten society of mages, long dead tradition and magic, forbidden islands...

Then it just stopped. You never get to see behind the curtain. This entire book is a promise that things could be very interesting and a great story may be unfolding, then it ends so abruptly that I thought I hadn't gotten the entire download of the book. Literally turn a page and done, with no exploration of anything that had been hinted at.

Overall, very disappointed with the direction of the series. The final fight is just written very poorly with no explanation of why the hero wins...