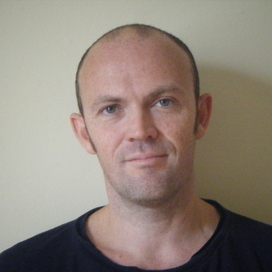 by Emlyn Rees (Author)
4.1 out of 5 stars 67 ratings
See all formats and editions
Sorry, there was a problem loading this page. Try again.

Danny Shanklin wakes up slumped across a table in a London hotel room he's never seen before.

He's wearing a black balaclava, a red tracksuit and a brand new pair of Nikes.

There's a faceless dead man on the floor and Danny's got a high-powered rifle strapped to his hands.

He hears sirens and stumbles to the window to see a burning limousine and bodies all over the street.

The police are closing in. He's been set up. They're coming for him...

With only his tech support friend, the Kid, for backup, Danny sets out on a nail-biting odyssey though the panicked city streets, in a desperate bid to escape, protect the people he loves, and track down the terrorists who set him up - and make them pay.

But with 500,000 CCTV cameras, 33,000 cops, 9 intelligence agencies, and dozens of TV news channels all hot on his tail, just how long will THIS one innocent man be able to survive?'

Fast and furious from the very start, Hunted is a shot of pure adrenalin. (Sam Bourne)

'Hunted gives new meaning to the phrase "fast-paced." Filled with clever twists, stylishly written and populated with characters who are as real as our friends and family (and enemies!), this thriller moves at breakneck pace from first page to last. Bravo!' (Jeffery Deaver)

An explosive and adrenaline-charged thriller (The Bookseller)

EMLYN REES spent his early twenties traveling around Asia and mixing cocktails in London for the likes of Sylvester Stallone and Princess Anne. He published his first crime novel aged twenty-five, his second a year later, and then co-wrote seven comedies with Josie Lloyd, including the Sunday Times bestseller Come Together. He is the editor of British and American paperback crime fiction imprint, Exhibit A, and lives on and around Brighton beach with Joanna Rees, aka Josie Lloyd.
Read more
Start reading Hunted (Hunted 1) on your Kindle in under a minute.

Emlyn Rees is an author, editor and festival director. He spent his early twenties traveling around Asia and pouring drinks in London for the likes of Sylvester Stallone and Princess Anne, before joining the Curtis Brown literary agency and having his first crime novel published aged twenty-five, his second a year later, and then co-writing seven comedies with Josie Lloyd, including the Number One Sunday Times bestseller Come Together. His race-against-the-clock thrillers, Hunted and Wanted, are published by Little, Brown in the UK and HarperCollins in the US and Hunted is being developed for film by Biting Point. He's co-written several parodies with Josie Lloyd, including We're Going on a Bar Hunt, The Very Hungover Caterpillar, The Teenager Who Came to Tea, and Shabby, A Very British Lifestyle. He lives in Brighton with Jo, who now writes under the name Joanna Rees, and their three kids. You can find out more about him at emlynrees.com, or follow him on Twitter @EmlynReesWriter.

4.1 out of 5 stars
4.1 out of 5
67 global ratings
How are ratings calculated?
To calculate the overall star rating and percentage breakdown by star, we don’t use a simple average. Instead, our system considers things like how recent a review is and if the reviewer bought the item on Amazon. It also analyses reviews to verify trustworthiness.

Amazon Customer
5.0 out of 5 stars Found
Reviewed in the United Kingdom on 4 March 2013
Verified Purchase
Well what a fab book, the story is mesmerizing and is as good as Simon Kernick and just as tough to put down once you start to read...
Read more
2 people found this helpful
Report abuse

Ron
5.0 out of 5 stars An Excellent Thriller.
Reviewed in the United Kingdom on 9 April 2013
Verified Purchase
This was the first book written by Emlyn Rees that I have read. I was not disappointed and will look for other books by him. An excellent thriller.
Read more
One person found this helpful
Report abuse

russey
5.0 out of 5 stars quality product
Reviewed in the United Kingdom on 22 April 2014
Verified Purchase
Exactly as described. I try to be picky and find something negative to say. I cannnot find anything to say
Read more
Report abuse

Mr. S. Lombardo
5.0 out of 5 stars Five Stars
Reviewed in the United Kingdom on 13 January 2015
Verified Purchase
Brilliant book and a great read also came very quick thank you ******
Read more
Report abuse
See all reviews
Back to top
Get to Know Us
Make Money with Us
Let Us Help You
And don't forget:
© 1996-2022, Amazon.com, Inc. or its affiliates