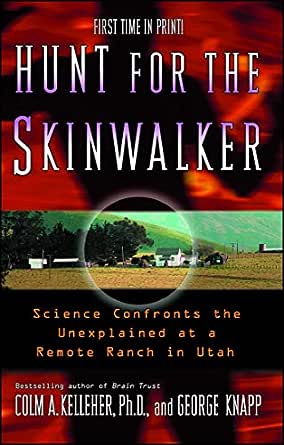 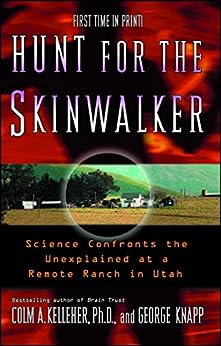 Hunt for the Skinwalker: Science Confronts the Unexplained at a Remote Ranch in Utah Kindle Edition

Colm A. Kelleher, Ph.D., is a biochemist with a fifteen-year research career in cell and molecular biology. Following his Ph.D. in biochemistry from the University of Dublin, Trinity College in 1983, Kelleher worked at the Ontario Cancer Institute, the Terry Fox Cancer Research Laboratory, and the National Jewish Center for Immunology and Respiratory Medicine. For the past eight years he has worked as project manager and team leader at a private research institute, using forensic science methodology to unravel scientific anomalies.

George Knapp is Nevada's best-known journalist. For 20-plus years, he has served as anchor, chief investigative reporter, and commentator for KLAS TV, the CBS affiliate in Las Vegas. He is a six-time Emmy winner, has earned the AP's Mark Twain award for news writing seven times, and twice was given the Edward R. Murrow award for Investigative Reporting. His reporting on Nevada's infamous Area 51 military base was selected by UPI as Best Individual Achievement by a Reporter in 1989. He also writes an award-winning weekly column for a Las Vegas newspaper. --This text refers to an out of print or unavailable edition of this title.

4.6 out of 5 stars
4.6 out of 5
1,259 global ratings
How are ratings calculated?
To calculate the overall star rating and percentage breakdown by star, we don’t use a simple average. Instead, our system considers things like how recent a review is and if the reviewer bought the item on Amazon. It also analyses reviews to verify trustworthiness.

Kindle Customer
5.0 out of 5 stars We are not alone
Reviewed in Australia on 12 March 2021
Verified Purchase
I finished the book in a couple of days, which I hadn't done it before. What an interesting book! I like it all
Read more
Helpful
Report abuse
See all reviews

Kindle Customer
5.0 out of 5 stars Great except for one thing
Reviewed in the United Kingdom on 17 March 2020
Verified Purchase
This is a good read, in my opinion. A lot happens to the family who end up selling the ranch to NIDS. The testing done by that organisation seems fairly thorough.

But I would have loved to have seen some of the photos mentioned repeatedly in the text and can't work out why a couple of the better ones weren't included.

I don't regret buying this book as it's an interesting read purely for Tom's experiences, but photos would have been great. Plus the author references some interesting books which I plan to read.
Read more
14 people found this helpful
Report abuse

A Customer
2.0 out of 5 stars Good if you're new to this type of book?
Reviewed in the United Kingdom on 7 February 2020
Verified Purchase
Overall I felt somewhat disappointed by the content of this book, I couldn't help thinking 'why the **** did you not take photographs of the various things you witnessed? What kind of researchers don't do that?!' The print quality on every other page was slightly blurry as well.

Dodwell
5.0 out of 5 stars A top read.
Reviewed in the United Kingdom on 15 July 2018
Verified Purchase
I'm halfway through this book and into the scientific exercise carried out to try and find out just what is going on in this remote part of Utah.
All I can say is, so far, so good. If even a fraction of the eeriness the one time owners of the ranch went through is true, I'm staying in bed for the rest of my life.

Jack Varley
4.0 out of 5 stars Bigfoot and Aliens and Cryptids, Oh My!
Reviewed in the United Kingdom on 4 February 2021
Verified Purchase
Entitling this book 'Hunt for the Skinwalker' doesn't really begin to cover the range of beings that purportedly emerged upon the Gorman family's Utah ranch in the mid-1990's to the early 2000's. There's quite a lot to break down with this work, so fortunately the book itself helps us in this endeavour by being divided into three parts. The first is the story of the Gorman family who inhabited the ranch and the various phenomena they encountered. This section will be extremely familiar to anyone who has read 'The Amityville Horror'. The only questionable part of this section is how often the family will rationalise something peculiar they see and not investigate it until later despite having already undergone a variety of harassing phenomena.

The second section of the book is dedicated to the investigation of the ranch by the National Institute for Discovery Science, which is where the book's authors become personally involved. The Gorman family sold the ranch to NIDS after the phenomena became unbearable, yet NIDS' tactic for investigating the goings-on seems remarkably inefficient. Essentially, the patriarch of the Gorman family remains on the ranch while NIDS respond to his call-outs once oddities take place. What ensues is a cat and mouse game of Gorman reporting something in only for the NIDS team to fly out from Las Vegas then arrive to find very little hours later. What doesn't make sense to me is why the NIDS team didn't remain on the ranch on a permanent basis?

The final section is devoted to potential theories which aim to explain what went down. The author proposes a lot, but only really makes the argument for a couple. Rather than a neutral consideration of the various possibilities; the author spends most arguing why they could not be solutions, only to make the arguments for his own preferred theories at the end. Essentially, each theory does not receive it's 'pros and cons', it is either argued against or for by the author with little consideration given to opposing viewpoints. The ultimate conclusion is that the site of the Gorman ranch is a sort of confluence point for various alternate dimensions and parallel universes, through which entities incomprehensible to the human mind like to pass through.

Overall, I do believe there is something bizarre about the Gorman ranch, though I would challenge the author's conclusions as being too confident while not being based on much beyond speculation. This is a good and intriguing book which occasionally delves into supernatural lore more broadly. There are points where it manages to undermine itself. I am someone who is extremely receptive to believing in this kind of thing yet there were points where even I was like 'come on, man' (particularly in the investigators' attempted use of remote viewing). This is a book worth reading, though I do wish it didn't go off on quite so many tangents attacking modern science (not that I disagree with those sections mind you).
Read more
Report abuse

Hatton106
2.0 out of 5 stars Disappointing....
Reviewed in the United Kingdom on 16 October 2015
Verified Purchase
What a disappointment. I concur with another reviewer that there are a few really interesting stories which pique the interest but that's it. The book is a ramble with a barely perceptible timeline. The author jumps backwards and forwards far too much and the ranch stories dry up for commentary on seemingly unrelated events. Spoiler Alert! They found nothing and recorded nothing. I do have to give the author his dues in that he comes across as very honest and does not promote any conclusions, which I respected. The ending chapters were interesting but for me there was no 'meat' on this bone to fully appreciate this story.
Read more
16 people found this helpful
Report abuse
See all reviews
Back to top
Get to Know Us
Make Money with Us
Let Us Help You
And don't forget:
© 1996-2021, Amazon.com, Inc. or its affiliates