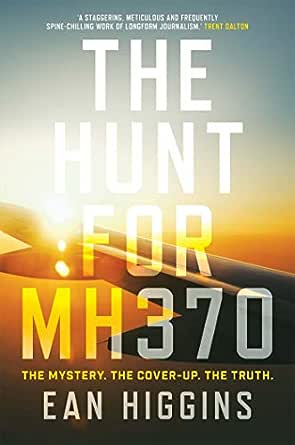 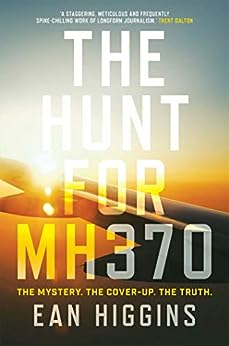 The Hunt for MH370 Kindle Edition

A gripping examination of one of the 21st century's most baffling, enduring and controversial mysteries – the disappearance of Malaysia Flight MH370.

Somewhere deep beneath the wild seas of the southern Indian Ocean, perhaps in the eerie underwater canyons of Broken Ridge along the Seventh Arc satellite band, lies the answer to the world's greatest aviation mystery.

Why, on the night of 8 March 2014, did Malaysia Airlines Flight MH370 suddenly U-turn, zig-zag up the Straits of Malacca, then vanish with 239 souls on board?

Was it an elaborate murder-suicide by a rogue pilot? A terrible accident such as onboard fire, rapid decompression or systems failure? A terrorist hijacking gone wrong? Or something else entirely?

Award-winning journalist Ean Higgins has led the world media's coverage of this incredible saga and draws on years of interviews with aviation experts, victims' families, air crash investigators and professional hunters across land, sea and sky to dissect the riddle of MH370's fate.

PRAISE FOR THE HUNT FOR MH370

"The Hunt for MH370 is a riveting page-turner written with the drama and intrigue of a thriller. Piece by tantalising piece, Ean Higgins unpuzzles this most baffling of mysteries, asking dangerous questions and revealing shocking truths." Dick Smith

"The disappearance of MH370 remains the greatest and most pressing mystery in aviation history that demands answers for both the families of the stricken passengers and the travelling public. No journalist has been more relentless in the pursuit of the truth of MH370 than Ean Higgins. The Hunt for MH370 is an engrossing book in which Higgins has meticulously pieced together the puzzle of the doomed flight from its vanishing to the flawed investigation and the largest maritime search ever that leads the reader to a chilling conclusion that is almost impossible to comprehend." Paul Whittaker, Chief Executive Sky News and former editor-in-chief, The Australian

Duncan McKenzie
5.0 out of 5 stars A detailed and definitive account of an aviation tragedy.
Reviewed in Australia on 26 November 2019
Format: Kindle EditionVerified Purchase
Firstly, I would like to acknowledge the pain, distress and grief of the families of the victims of this aviation disaster. May you find the truth and find peace and closure. This book details the search for MH370 and outlines the most likely scenarios as to what precisely may have happened to this aircraft, its passengers and crew. It is an absorbing and compelling read about a tragedy we have, as yet, no definitive answers for. Although having said this there is one scenario that according to aviation experts best fits the facts that we have, and this the author details. The author, an investigative journalist, has written here a definitive volume about the many facets of this tragedy.
Read more
Helpful
Comment Report abuse

Cynthia Moretti
5.0 out of 5 stars Outstanding piece of work - to be commended
Reviewed in Australia on 18 March 2019
Format: Kindle EditionVerified Purchase
Events told as happened.... easy to read and understand.
Amazing book in that I learned so much about the aviation and air crash investigations. Courageous and dedicated journalism to get the truth known. A must read!

Peter Fung
5.0 out of 5 stars Best MH370 book
Reviewed in Canada on 25 March 2019
Format: Kindle EditionVerified Purchase
I’ve read every single book on MH370 and this is the best one. Easy to follow, gripping and just overall excellent journalism. If you can only read one book on mh370 this is the one (with Larry Vance’s book a close second)
Read more
Helpful
Report abuse

Eigenstein
5.0 out of 5 stars A fascinating read.
Reviewed in the United States on 4 September 2019
Format: Kindle EditionVerified Purchase
We may never know the true story, but this book has detailed all the theories currently available, as well as presenting the author’s point of view. A well written, compelling read.
Read more
2 people found this helpful
Helpful
Report abuse