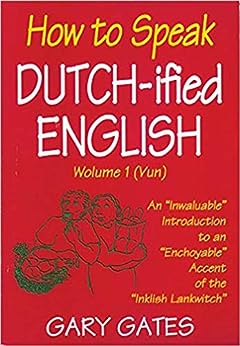 Gary Gates is a Dutchman from Lebanon County, Pennsylvania, where all the baloney comes from. People know where he is from when he opens his mouth.

Gary is a performer, having appeared hundreds of times at festivals, fairs, colleges, libraries, corporation banquets, comedy clubs, writers groups, resorts, and on radio and TV. His Pennsylvania Dutch humor is riotous fun, sweet enough for family entertainment, yet salty enough to keep adults and children in stitches.

He loves performing and celebrating his unique heritage with his fellow Dutchmen, and sharing it with non-Dutchmen, whose response to his show has been overwhelmingly hysterical. Some people have declared him the new Professor Schnitzel, even the Mark Twain of Pennsylvania Dutch country. Even more people simply call him the best windbag they ever heard. --This text refers to an alternate kindle_edition edition.

Karl Noll
5.0 out of 5 stars I Laughed My Way Through This Book
Reviewed in the United States on 26 May 2019
Verified Purchase
The writer accomplished a not-so-easy task of writing how the word or phrase sounds as opposed to its correct spelling. Accurate, excellent work. This book is a historical preservation and contribution to language in our time. I suspect in 3 centuries from now people will still be laughing and enjoying this masterpiece and scholars will be appreciating the labor of one dedicated author.
Read more
One person found this helpful
Report abuse

CJW
5.0 out of 5 stars Funny!
Reviewed in the United States on 9 January 2014
Verified Purchase
This is not a serious book on language. It just pokes fun at the "dutchie" accent that is familiar to us residents of south central PA. As one who puts a great deal of value on proper grammar, I have to take it in small doses. But I have enjoyed it, as many of the pronunciations are quite amusing!
Read more
2 people found this helpful
Report abuse

Lettice H Moon
4.0 out of 5 stars Memories from my youth!
Reviewed in the United States on 13 November 2014
Verified Purchase
Very entertaining if you grew up in the PA Dutch area!
Read more
2 people found this helpful
Report abuse

R. Josh Bowers
4.0 out of 5 stars It was a fun book
Reviewed in the United States on 2 June 2011
Verified Purchase
I suppose that some people are just born without funny bones. I liked the book and have heard most of what is said in the colloquial dialect around this part of Pennsylvania. Maybe it is an inside joke. Really don't care, but I thought that it was lots of fun. I'm looking forward to getting the second volume.
Read more
2 people found this helpful
Report abuse
See all reviews
Back to top
Get to Know Us
Make Money with Us
Let Us Help You
And don't forget:
© 1996-2021, Amazon.com, Inc. or its affiliates