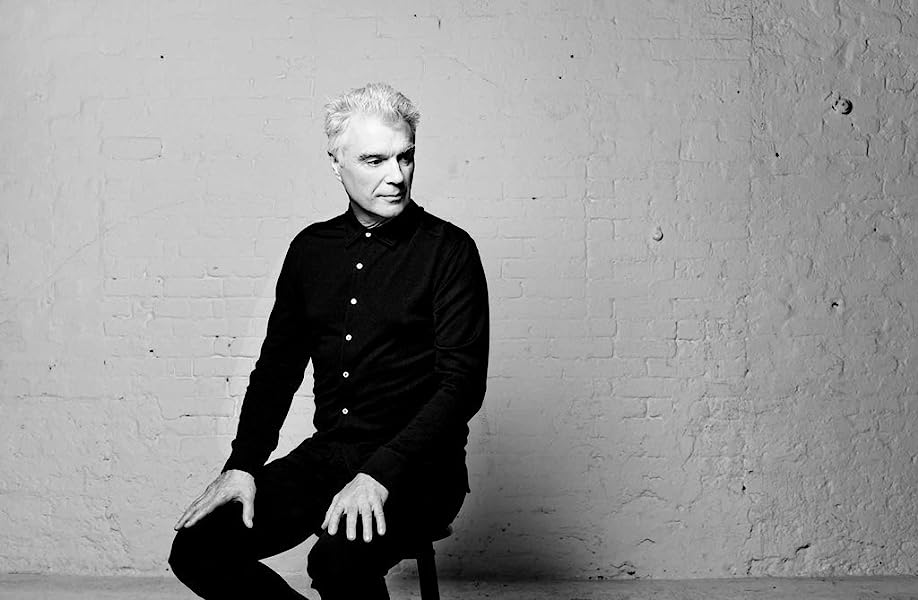 by David Byrne (Author)
4.7 out of 5 stars 988 ratings
See all formats and editions
Sorry, there was a problem loading this page. Try again.

Page 1 of 1 Start overPage 1 of 1
Previous page
Next page
Start reading How Music Works on your Kindle in under a minute.

"From the former Talking Heads frontman, a supremely intelligent, superbly written dissection of music as an art form and way of life...Byrne touches on all kinds of music from all ages and every part of the world... Highly recommendedanyone at all interested in music will learn a lot from this book.""Kirkus" (Starred Review) "In this fascinating meditation, Talking Heads frontman Byrne ("Bicycle Diaries") explores how social and practical context, more than individual authorship, shaped music making in history and his own career... his chapters on Heads recording sessions are some of the most insightful accounts of musical creativity yet penned. The result is a surprising challenge to the romantic cliche of musical genius... Byrne s erudite and entertaining prose reveals him to be a true musical intellectual, with serious and revealing things to say about his art.""Publishers Weekly" (Starred Review) David Byrne is a brilliantly original, eccentric rock star, and he has written a book to match his protean talents ... What s best about [it] is that Byrne concentrates on his own experience, from a teenage geek splicing layers of guitar feedback on his father s tape recorder (he had a mild self-diagnosed case of Asperger s syndrome, he writes) to arty if neo-primitive rock star with the early Talking Heads at CBGB to increasingly sophisticated, globe-wandering art-rocker, happily collaborating with all manner of world musicians and pop-technological innovators. John Rockwell, "The New York Times Book Review" "Endlessly fascinating, insightful, and intelligent."June Sawyers, "Booklist" (Starred Review) "[How Music Works is] the book [Byrne] was born to write. I could make a good case for calling this "How Art Works" or even "How Everything Works.""Cory Doctorow, "Boing Boing" "Byrne explores a whole symphony of argument in this extraordinary book with the precise, technical enthusiasm you'd expect from the painfully bright art school-educated son born in Scotland, raised in the States of an electrical engineer, occasionally mopping his fevered brow in the crestfallen manner of a 19th-century poet... It's fascinating."Mark Ellen, "The Guardian" "'How Music Works, ' is as engaging as it is eclectic: a buoyant hybrid of social history, anthropological survey, autobiography, personal philosophy, and business manual, sometimes on the same page... We re changed. Even for the most ardent explorers (and Byrne is one) this is some seriously unknowable territory.""The Boston Globe" By all accounts, Byrne s style and energy are as apparent on the page as on the stage. Kathryn Schulz, "New York Magazine" [Byrne] wraps his keen cultural insights in a sheath of self-aware subjectivity and unapologetic personal conviction, with just the right amount of conversational candor Maria Popova, "Brain Pickings" ""How Music Works" is a good read for anyone interested in art and technology and how creativity has been transformed in the digital age."Bryant Frazer, "Studio Daily" Truly dazzling, covering a staggering scope of topics ... Almost every page [is] a song. Jason Heller, "The Onion A.V. Club" In the course of "How Music Works," Byrne integrates his discussion of all the issues of recording and live performance into a personal account of his own career. Although this book stops short of turning into a memoir or autobiography, fans seeking a behind-the-scenes account of Byrne's life and times won't be disappointed ... An essential guide to performance and recording, honest and up-to-date, and filled with both practical advice and insightful commentary. Ted Gioia, "The San Francisco Chronicle" Bob Dylan, Keith Richards, Jay Z, even Daniel Lanois have all given us books in recent years. And they ve all been interesting and worth reading. But none of them is as good as David Byrne s book ... He weaves his account of the evolution of music from animals to humans and the history of changes in the way music studios work into the most accessible and unpretentious narrative of such a story that I have yet come across. David Rothenberg, "The Globe and Mail" A decidedly generous book welcoming, informal, digressive, full of ideas and intelligence and one has the pleasant sense that Byrne is speaking directly to the reader, sharing a few confidences he has picked up over the years. Tim Page, "The Washington Post" An accomplished celebration of an ever-evolving art form that can alter how we look at ourselves and the world... a meticulously researched and hugely absorbing history of music Fiona Sturges, "The Independent" An entertaining and erudite book, from a figure who has spent his career proving that those two adjectives can happily coexist ... The chapter on the economics of music should be required reading for all 16-year-olds tinkering with their GarageBand software and dreaming of dollar signs, while the section on How to Make A Scene is nothing less than a manual for urban regeneration through pop culture ... A serious, straightforward account of an art form that also manages to be inspiring. You could do a lot worse than use it as a thinking-outside-the-box management manual or a college primer. Art and Society 101: Stop Making Sense. Peter Aspden, "Financial Times" David Byrne deserves great praise for How Music Works. It is as accessible as pop yet able to posit deep and startlingly original thoughts and discoveries in almost every paragraph ... This book will make you hear music in a different way.Oliver Keens, "The Telegraph" Smart and impeccably researched ... A text to read and pick through time and again ... all this is what you d expect, and hope for, from the foremost heady apologist of pop music. It s a must-read for anyone who has ever felt moved by a catchy tune and wanted more. James Ramsay, "BlackBook" "

David Byrne is a Scottish-born Rock and Roll Hall of Famer and cofounder of Talking Heads. He has been the recipient of many awards, including an Oscar and a Golden Globe. The author of "Bicycle Diaries" and "The New Sins," Byrne lives in New York City.

4.7 out of 5 stars
4.7 out of 5
988 global ratings
How are ratings calculated?
To calculate the overall star rating and percentage breakdown by star, we don’t use a simple average. Instead, our system considers things like how recent a review is and if the reviewer bought the item on Amazon. It also analyses reviews to verify trustworthiness.

beeswax
5.0 out of 5 stars Not sure what I was expecting
Reviewed in Australia on 10 May 2018
Verified Purchase
David Byrne and Talking Heads were influential to my life in ways that verge on embarrassing. They were that essential slice of the punk/new wave scene that said with neither smirk nor rancour, “Give it a shot. What have you got to lose?” The punk as affirmation school, as it were. This book is filled with the inquisitiveness, if not wisdom, of one who has spent his adult life in the public eye yet remains curiously untouched by it all and retains a deep sense of ‘What happens if we try this,” essential to every artistic adventure and adventurer.
Read more
Helpful
Report abuse

222
5.0 out of 5 stars like it
Reviewed in Australia on 22 August 2019
Verified Purchase
good quality book
Read more
Helpful
Report abuse

Michael H.
5.0 out of 5 stars A great read!
Reviewed in the United Kingdom on 18 May 2019
Verified Purchase
Let's face it, if you're going to read a book about how music and the industry work, who better than David Byrne to write it? His style of writing makes it an easy read and he even goes into detail about the money side of things, which has always been interesting to me. If you like music, are interested in the business side of it or you simply what to know more about it from someone who lived it, then you'll love this book!
Read more
4 people found this helpful
Report abuse

Mr. Michael Adams
5.0 out of 5 stars Fascinating.
Reviewed in the United Kingdom on 15 March 2018
Verified Purchase
A very good book. Written in an almost 'chatty' style, so very easy to read. Lots of fascinating information and insights into music generally (of all sorts). Plus quite detailed description of how David has worked before Talking Heads and equally interesting how his work has developed in the years since that band. If you liked TH and David's solo work I am sure you will find this a very enlightening read.
Read more
5 people found this helpful
Report abuse

G Godmon
5.0 out of 5 stars Excellent read by a man who knows his stuff
Reviewed in the United Kingdom on 5 June 2021
Verified Purchase
A clever, absorbing 'A level' intense book covering all aspects of music. David Byrne's style of writing is relaxed but really covers all areas in depth. Particularly enlightening was the money side of getting music out to the listener; it changed my purchasing habits completely. I buy direct from the artists own website now. Highly recommended if you love your sounds.
Read more
Report abuse

S. Luke
5.0 out of 5 stars what a great introduction to the wonders of music
Reviewed in the United Kingdom on 28 March 2014
Verified Purchase
I didn't know really what to expect from this book. I'm tired of music biographies in general but this book is not that. It contains insightful biographical details that inspire but the primary takeaway is a fresh understanding of what music really is and a determination to find out a lot more.

Once In A Lifetime provided a soundtrack to everything that was good about being an emerging adolescent of the late 70s and early 80s and I always wondered how they arrived at that finished piece. Now I know and I also have some validation that my own songwriting and composing instincts weren't so whacky after all, so thanks David for giving me that.

Buy this book. You will come back to it from time to time. Essential reading for anyone who wants to learn about music and should perhaps be part of a standard curriculum for music in general.
Read more
4 people found this helpful
Report abuse

Amazon Customer
5.0 out of 5 stars Thoughtful account of how we get to hear music
Reviewed in the United Kingdom on 13 June 2019
Verified Purchase
Fascinating insights into not only the author's outlook but also the business and production aspects of the music industry. Also the anecdotal offerings should please the fan base. BUT it is not just a history of Talking Heads or an account of his solo career. There's a lot more besides.
Read more
One person found this helpful
Report abuse
See all reviews
Back to top
Get to Know Us
Make Money with Us
Let Us Help You
And don't forget:
© 1996-2021, Amazon.com, Inc. or its affiliates