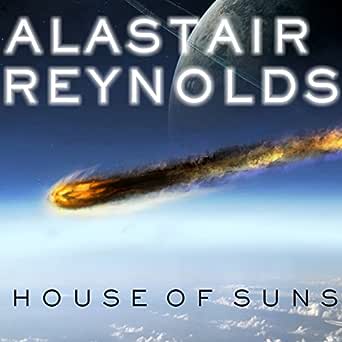 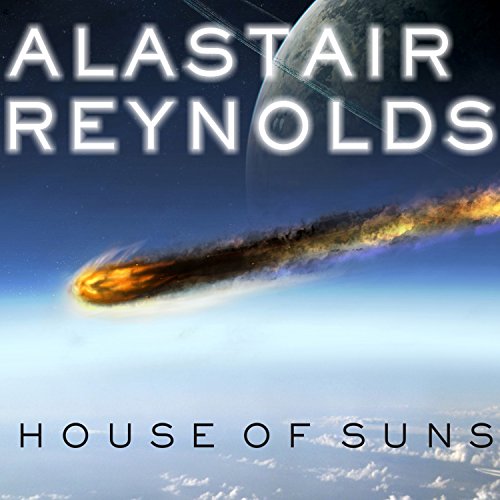 4.5 out of 5 stars
4.5 out of 5
375 global ratings
How are ratings calculated?
To calculate the overall star rating and percentage breakdown by star, we don’t use a simple average. Instead, our system considers things like how recent a review is and if the reviewer bought the item on Amazon. It also analyses reviews to verify trustworthiness.

Slava Pisarevskiy
5.0 out of 5 stars Interesting up to very end
Reviewed in Australia on 8 September 2019
Verified Purchase
I have read a few books by A.Reynolds and they are all absolutely brilliant peace of Space Opera. This book is exceptionally good written. Never was bored during reading. Plot is action reach and thought provoking final. Excellent!
Read more
Helpful
Comment Report abuse

John M. Ford
TOP 500 REVIEWER
3.0 out of 5 stars A Grand Scale in Both Space and Time
Reviewed in Australia on 25 September 2014
Alastair Reynolds has written the best galaxy-spanning, big-idea space opera since Vernor Vinge's  A Fire Upon The Deep . It has a fascinating universe with characters operating from truly deep-time, cross-galaxy perspectives. Among them are:

Campion and Purslane, two non-identical clones from an original set of a thousand "shatterlings." They and their siblings were created to repeatedly make exploratory circuits of the galaxy and meet every 200,000 years or so to share memories and plan their next circuits. Risking official censure, Campion and Purslane consort during their circuits rather than exploring independently.

Hesperus, a robot of the Machine People who has lost much of his memory, but strives to discover and complete his mission. His actions demonstrate repeated loyalty to Campion and Purslane.

The Spirit of the Air who was once a man, became a machine intelligence, and finally evolved into a distributed machine intelligence. It controls the climate of the planet Neume and is regarded by the population as a capricious and inscrutable god. Asking the Spirit for favors is dangerous to everyone.

The Vigilance, a civilization of immortal archivists, collects information about the entire galaxy, continually sifting and prioritizing it. Some of this information is shared with other civilizations--with unforeseen consequences.

The novel is also rich with highly-imaginative Big Ideas. Stardams are containment devices of only partially understood technology that can contain entire solar systems. Aspic of Machines is a high-tech paste that can perform any number of miraculous tasks--just smear it on the problem surface. "Whisking" from place to place using dynamic transporters seems the least of the marvels available in the far-distant future.

The book has two characterization flaws worth mentioning. First, many of the long-lived characters--particularly Campion and Purslane's fellow shatterlings--lack the experience and insight one would expect from human beings who have lived for tens of thousands of years. The author might learn a lesson or two from the age-weary wisdom of Poul Anderson's characters in


The Boat of A Million Years . Second, many of the shatterlings are difficult to tell apart given what little we learn about them. This is particularly frustrating when readers are trying to figure out which one is a traitor to the Gentian Line. The author could have extracted key episodes from each shatterling's history and presented a Tom Clancy-like one-page profile that left readers with a feel for the shatterling's personality and motives.

There are also two story weaknesses. I won't summarize the plot, as it is best experienced without advance cueing. I will say that it drags in places. I am tempted to conclude that the author does this deliberately to help us short-lifers understand the book's timescale, but it happens too often in dialogue for this to be entirely true. While there are interesting and surprising resolutions to many of the questions raised in the story, there are some left unresolved. For me this felt more like unpolished storytelling than cliff-hanging for a possible sequel. Your mileage may vary.

Despite having grumbled over its flaws, I recommend the book to my fellow SF fans as enjoyable and thought-provoking. After reading it I continue to regard Alastair Reynolds as one of my favorite SF authors. Pick up this book and enjoy the long journey he has mapped out for us.
Read more
2 people found this helpful
Helpful
Comment Report abuse
See all reviews

Jane Aland
4.0 out of 5 stars Shattered
Reviewed in the United Kingdom on 25 April 2019
Verified Purchase
One of Reynold's better novels, this stand-alone SF novel is also a good place for readers unfamiliar with the author to try. In scale this is a truly epic space opera, with a huge range of both time and setting. The central idea revolves around seeing how human beings operate against a vast background, with individuals being able to 'shatter' themselves into numerous clones, then pool their memories during periodic reunions. Along with the shattering process, Reynold's plays with plenty of other rich SF concepts, including various forms of machine intelligence; the ability to control subjective time; and some truly gruesome torture technology that allows a person to be divided into hundreds of slices whilst still alive.

Despite some pretty heady concepts, Reynolds keeps the narrative moving along at a decent pace, with a readable tale of buried secrets, betrayal and hidden memories. It's not perfect - whilst the main characters are strong, some of the secondary figures (particularly in the latter half) are a little thinly sketched, and an extensive space chase in the latter stages ironically slows the pace down a bit, but this is certainly a solid slice of science fiction, with just the right mix of SF invention and narrative focus.
Read more
7 people found this helpful
Report abuse

A. Butler
5.0 out of 5 stars OMG!
Reviewed in the United Kingdom on 7 June 2020
Verified Purchase
This is possibly the most fabulous story I've read in may years.

Excellent characterisation, truly wonderful plot lines. I really could not put this book down, my poor wife and children were ignored for a long time as I read this book.

Sins of our fathers?no, sins of ourselves. Revisited. IMHO the recent 'Picard' TV series on Amazon stole some ideas from this, but I'll not say which.

This really is thought provoking, top-notch fiction. I don't care which genre you prefer, murder mystery, detectives, science fiction, romance. Its such a great book everyone will enjoy this one. My wife who reads lots of historical fiction loved this book.
Read more
Report abuse

Dr. Michael Heron
5.0 out of 5 stars A book full of deep ideas
Reviewed in the United Kingdom on 9 January 2015
Verified Purchase
House of Suns may not be the greatest sci-fi book I've ever read, but it certainly wouldn't look stupid on a short-list of contenders. It's not so much the plot of the book that drives it forward, although there is a reasonably interesting conspiracy angled 'whodunnit' at the core of it. What makes it very special though are the deep concepts that the (mostly) hard sci-fi of the setting explores.

It's a beautifully written, deeply philosophical examination of scale, more than anything else - how a galaxy as big as ours might be sampled within the constraints implied by our current understanding of the inherent laws of the universe. There's no faster than light travel, although there is advanced technology that extrapolates from our own in credible ways. The protagonists of the book sample all the galaxy has to offer over lifespans of millions of years, As travel may take hundreds or thousands of years however they can only taste the occasional span of decades in between centuries of stasis or cryogenic suspension. The malleability of time and the staleness of experience are core themes in the book, and executed in both a compelling and hauntingly melancholic way. It's a book full of ideas.

Carl Sagan once said 'The universe is not required to be in harmony with human ambition'. House of Suns offers a hopeful take on a future which still offers much of wonder whilst still honouring the essential limitations implied by Sagan's insight.

Keris Nine
4.0 out of 5 stars Epic work from the best SF writer out there
Reviewed in the United Kingdom on 21 November 2009
Verified Purchase
Wonderful though Reynolds' Revelation Space novels are, you could argue that particularly in regards to his more recent work, he seems to operate or a freer, more imaginative and simply more expansive manner in the galaxy spanning books outside his more famous universe. That was certainly the case with Pushing Ice and now with House of Suns, he finds another way of compressing time and space on an unimaginable level across millions of years (and light years) through the agency of a race of cloned humans of the Gentian Line.

The Gentian line have been around long enough to observe and record the vast changes that take place in the galaxy, watching cultures come and go, intervening when asked to create Star Dams using the ancient technology of the advanced Priors, but primarily seeking information about the mysteries of the universe. Campion and his consort Purslane have however inadvertently stumbled upon a piece of information that someone doesn't want revealed, a secret that could threaten the stability of the whole galaxy - and this unknown entity, who it is suspected is related to a mysterious organisation called the House of Suns, is prepared to wipe out the entire Gentian Line to make sure that it remains a secret.

House of Suns is a strong Alastair Reynolds novel - not as pulpy sci-fi as his previous novel The Prefect, it's harder on the technical and scientific side of things, but just as strong in characterisation and plotting, taking into consideration vast concepts of the nature of space, longevity and artificial intelligence. The underlying conflict at the heart of House of Suns though, however well dressed up it may be, is nonetheless ultimately an age-old one in science-fiction and it is brought to a rather abrupt and open-ended conclusion by Reynolds, but this is nonetheless fine work of an extremely high standard by simply the best writer of grand space operatic science-fiction around.
Read more
3 people found this helpful
Report abuse

Willy Eckerslike
5.0 out of 5 stars Wow! Absolutely brilliant.
Reviewed in the United Kingdom on 6 August 2010
Verified Purchase
On my continuing mission to find some modern Sci-Fi that I enjoy as much as the classics from the likes of Azimov, Harrison, Pohl, Aldiss and the rest, I have recently been stumbling around rather unsuccessfully. I obviously encountered the incomparable Iain M. Banks back in the late 80's but I have never found anyone else with his depth and scope of imagination.

Until, that is, I happened across Alistair Reynolds while browsing for new (to me) authors. What a find! I suppose this book could be summed up as an ultimately intergalactic space opera action mystery love story, but that doesn't do it justice. The shatterling concept, by itself, is brilliantly original, but the characterisation and galaxy & millennia spanning narrative are simply magnificent. I'm not entirely sure the early life of Abigail Gentian and her subsequent Palatial obsession adds an awful lot to the story, but inasmuch as they pertain to her personality and that of her shatterlings, they are relevant and add depth to the narrative. There are, of course, nuggets gently borrowed from other masterpieces of the genre, but these are in no way derivative; more of a respectful homage to earlier masters.

There is nothing more to add. More Alistair Reynolds - Now!
Read more
7 people found this helpful
Report abuse
See all reviews
Get FREE delivery with Amazon Prime
Prime members enjoy FREE Delivery and exclusive access to movies, TV shows, music, Kindle e-books, Twitch Prime, and more.
> Get Started
Back to top
Get to Know Us
Make Money with Us
Let Us Help You
And don't forget:
© 1996-2020, Amazon.com, Inc. or its affiliates