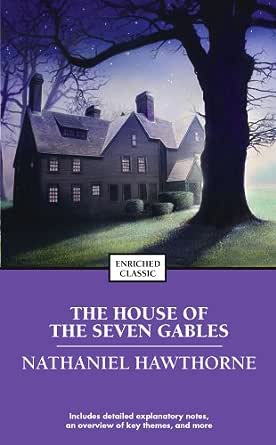 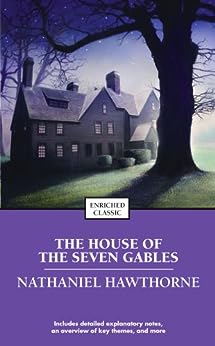 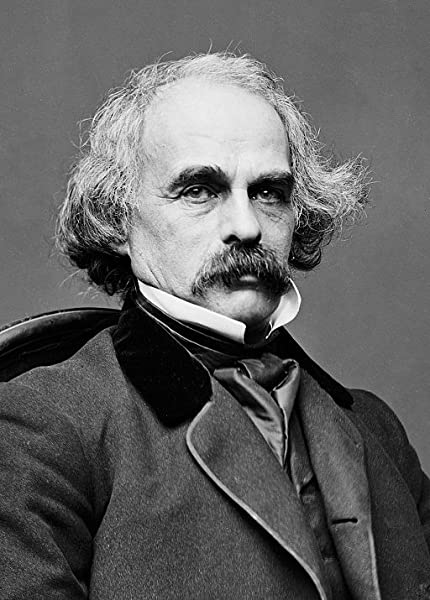 "A large and generous production, pervaded with that vague hum, that indefinable echo, of the whole multitudinous life of man, which is the real sign of a great work of fiction."
--Henry James

-A large and generous production, pervaded with that vague hum, that indefinable echo, of the whole multitudinous life of man, which is the real sign of a great work of fiction.-
--Henry James --This text refers to an alternate kindle_edition edition.

First published in 1851, The House of the Seven Gables is one of Hawthorne's defining works, a vivid depiction of American life and values replete with brilliantly etched characters. The tale of a cursed house with a "mysterious and terrible past" and the generations linked to it, Hawthorne's chronicle of the Maule and Pyncheon families over two centuries reveals, in Mary Oliver's words, "lives caught in the common fire of history."
This Modern Library Paperback Classics edition uses the definitive text as prepared for The Centenary Edition of the Works of Nathaniel Hawthorne; this is the Approved Edition of the Center for Scholarly Editions (Modern Language Association). It includes newly commissioned notes on the text. --This text refers to an alternate kindle_edition edition.

Nathaniel Hawthorne (1804-1864) was born in Salem, Massachusetts, where he wrote the bulk of his masterful tales of American colonial history. His career as a novelist began with The Scarlet Letter (1850) and also includes The house of the Seven Gables, The Blithedale Romance, and The Marble Faun. --This text refers to an alternate kindle_edition edition.

A gloomy New England mansion provides the setting for this classic exploration of ancestral guilt and its expiation through the love and goodwill of succeeding generations.
Nathaniel Hawthorne drew inspiration for this story of an immorally obtained property from the role his forebears played in the 17th-century Salem witch trials. Built over an unquiet grave, the House of the Seven Gables carries a dying man's curse that blights the lives of its residents for over two centuries. Now Judge Jaffrey Pyncheon, an iron-hearted hypocrite and intellectual heir to the mansion's unscrupulous founder, is attempting to railroad a pair of his elderly relatives out of the house. Only two young people stand in his way--a visiting country cousin and an enigmatic boarder skilled in mesmerism.
Hawthorne envisioned this family drama of evil, revenge, and resolution as a microcosm of Salem's own history as in idealistic society corrupted by greed and pride. His enduring view of the darkness at the heart of the national soul has made The House of the Seven Gables a landmark of American literature. --This text refers to an alternate kindle_edition edition.

4.1 out of 5 stars
4.1 out of 5
430 global ratings
How are ratings calculated?
To calculate the overall star rating and percentage breakdown by star, we don’t use a simple average. Instead, our system considers things like how recent a review is and if the reviewer bought the item on Amazon. It also analyses reviews to verify trustworthiness.

M. Dowden
5.0 out of 5 stars Always Popular
Reviewed in the United Kingdom on 13 June 2018
Verified Purchase
This novel of Nathaniel Hawthorne has always remained popular, and it is easy to see why, although the language is a bit colourful compared with that of today, and the descriptions can go on a bit at times.

Opening with a chapter on the history of the house of the title, so we see how a man was forced off his land and executed for witchcraft. This meant that the Pyncheon family could take the land and build their mansion on it. We are then transported to the 19th Century, where the house is in a state of disrepair and Hepzibah Pyncheon is the owner. We thus follow this dark romantic novel through all its twists and turns, with always an atmosphere of possible supernatural influences and darkness hanging over everything.

Taking in themes such as Original Sin, retribution, greed, guilt and atonement, this has a lot to offer readers, and there is quite a bit of symbolism here which adds an extra layer, as we see things in conjunction with others. As I have already mentioned, this can be a bit over-descriptive at times and this is due to the changes in the usage of language and writing since this was first written. This means that although most people should have no trouble reading this, there will always be those who either do not like this, or have trouble being able to read older styles of writing.

If you are looking for a book that you can really get your teeth into and can really get to grips with characters and situations, then you should enjoy this.

Aletheuon
5.0 out of 5 stars Darkly brilliant
Reviewed in the United Kingdom on 27 April 2014
Verified Purchase
This is a truly marvellous novel! I had never read anything by Nathaniel Hawthorne before reading this book but I now understand why he is regarded as one of America's greatest novelists. It is a darkly Gothic and romantic book. What I love most about it is the beautiful descriptions of life in the mid nineteenth century and, above all, the wonderful psychological insight Hawthorne shows. This is a book which is built on interaction between complex and interesting characters who have the power to arouse one's sympathy. The novel is set in a gloomy New England mansion, built by a wealthy and cruel Puritan ancestor of the Pyncheon family and haunted, either supernaturally or psychologically, by guilt caused by the cruelties, fraudulent acquisitions and sudden death of the house's first owner. The house was built on ground seized from its legitimate owner, Matthew Maule, whom Colonel Pyncheon had executed for witchcraft during the Salem witch trials. Maule, according to family legend, cursed the Pyncheon family. The Colonel's portrait still hangs in the decaying house, an awful reminder of guilt and the curse, binding its residents to the past.
The house is now owned by Hepzibah Pyncheon, who is a lady, one of the last of a dying breed of aristocrats in America. Dreadfully poor, she opens a shop in one room of her house, though she is completely unsuited to shop work. Her brother Clifford arrives home after serving thirty years for murder. A wealthy relative, Judge Jaffrey Pyncheon, offers help but is refused with loathing. Phoebe, a distant relative, comes to live with them and this pretty, cheerful and loving girl soon becomes indispensable to the two vulnerable old people. There is also a mysterious young lodger, Holgrave. The story moves on grippingly to its happy ending, though the real pleasure is in the glorious prose that describes the journey to that ending.
The House of the Seven Gables was published in 1851. I did a bit of research into the author and found that there are real similarities between his family history and the story of Pyncheon family. The setting, apparently, was inspired by a gabled house in Salem belonging to an ancestor, Judge Hathorne, who had never repented of his part in the Salem Witch Trials. Nathaniel's name was also Hathorne, but he added the 'w' to distance himself from the guilty past of his own family. Fascinating!
Read more
8 people found this helpful
Report abuse

Kindle Customer
3.0 out of 5 stars Tediously Slow
Reviewed in the United Kingdom on 28 June 2017
Verified Purchase
While I appreciate the beautiful use of language used by the author, I must say I found the actual storyline deadly dull and slow. This was mostly because of the extremely lengthy and detailed descriptions which covered pages at a time. I was over half way through before anything seemed to happen at all.
It is a story of a house, the land on which it was built being taken unscrupulously from its original owner, Matthew Maule, who was tried and hanged for witchcraft. He cursed the perpetrator Colonel Pyncheon, who died shortly after building a new house on the exact site of the original one. Hepzibah Pyncheon, old, reclusive and weary, lives there now in the musty, damp old rooms. Her brother Clifford returns after years of prison, a broken man and a fresh young cousin Phoebe comes to stay. Another rich old cousin Judge Pyncheon wishes to speak to Clifford, but why?

The beginning of the story promised much, but did not deliver in my opinion. Dreary and dull.
Read more
Report abuse

mab
5.0 out of 5 stars Five Stars
Reviewed in the United Kingdom on 29 May 2018
Verified Purchase
This book was bought for another.
Read more
Report abuse
See all reviews
Get FREE delivery with Amazon Prime
Prime members enjoy FREE Delivery and exclusive access to movies, TV shows, music, Kindle e-books, Twitch Prime, and more.
> Get Started
Back to top
Get to Know Us
Make Money with Us
Let Us Help You
And don't forget:
© 1996-2020, Amazon.com, Inc. or its affiliates