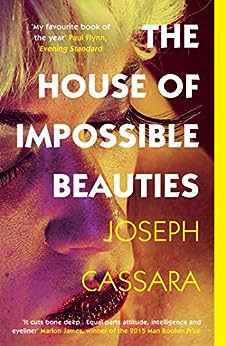 'Cassara has written a heartbreaking tale of gay men struggling to survive in a world of clubbing and drugs. It is also an unexpected love story.'

‘The House of Impossible Beauties tells of a search not only for respect but, above all, love in a time and place that seeks to starve its characters of both… From these threads of fact and myth, Cassara runs up a fictional ensemble that craftily stitches glamour and grit.’

‘Vivid and engaging... The novel feels like an anthropological plunge into another era, enhanced by rhythmic, urban prose littered with slang and Spanglish.’

‘Vibrant… The House of Impossible Beauties is especially strong at detailing the sadness of queer life… This is not a bleak novel, however – far from it. The scenes of love and support between the characters have a kindness that more than matches the sadness, and the dialogue, peppered with early 80s disco or TV references and “Spanglais” dialect, is frequently hilarious… [offering] a convincing insight into the world in which they lived.’

‘Cassara’s “beauties” actually does the impossible. It cuts bone deep into a scene that’s all surface, mines the grit that produces glitter, and finds burning life in this lost generation of beautiful and damned. The novel strikes a flame the way a character strikes a pose – equal parts attitude, intelligence and eyeliner.’

‘My favourite book of this year is a fictional imagining of the back stories of the House of Xtravaganza, the subject of Jenny Livingston’s peerless voguing documentary, Paris Is Burning.’

‘Vividly imagined... Riveted by their stories, you are so struck by the Xtravaganza’s strength and determination, by their vibrant spirits and humour, by their creativity, by their sensitivity to beauty and their capacity to give and receive love.’

‘A vibrant and dynamic debut novel.’

― Cosmopolitan Magazine --This text refers to the paperback edition.

A gritty and gorgeous debut inspired by the real House of Xtravaganza made famous by the seminal documentary Paris Is Burning --This text refers to the paperback edition.

Joseph Cassara was born and raised in New Jersey. He holds degrees from Columbia University and the Iowa Writers' Workshop and has been a writing fellow at the Fine Arts Centre in Provincetown, Massachusetts. The House of Impossible Beauties is his first novel. He lives in Iowa. --This text refers to the paperback edition.
Read more

Jenny Foster
5.0 out of 5 stars Heartbreaking, uplifting, beautiful, unforgettable - read it!
Reviewed in the United Kingdom on 20 December 2018
Verified Purchase
I found this novel utterly compelling, absorbing, moving. poignant. I just couldn’t put it down. It reminded me of A Little Life - which I found equally raw and all-encompassing - but this has so much more heart, more warmth, more love. It’s just an incredibly beautiful novel, painting a vibrant image of the diverse voices of the 1980s/1990s Harlem Ballroom scene previously brought to life in the documentary "Paris is Burning". All in all, Cassara has written a wonderful, bold & compassionate story about that time and those lives. It is without doubt a novel will stay with you, it will linger, it will command a permanent place in your heart. I couldn’t recommend it enough. You must read it and see for yourselves just how wonderful it is!
Read more
One person found this helpful
Report abuse

BookwormBev
5.0 out of 5 stars A Beautiful Tribute
Reviewed in the United Kingdom on 7 March 2021
Verified Purchase
So many emotions evoked reading about the lives, loves and deaths of these fabulous, fictional - but could so easily be real with different names and slight alterations to their stories - people.
Read more
Report abuse

Anngee
4.0 out of 5 stars Well......
Reviewed in the United Kingdom on 4 June 2018
Verified Purchase
Selected by our book club, this wasn't a book I would ever come across let alone read. So glad I did. Funny, informative and sad all mixed up together. Beautiful people whose lives seem to just be on a downward spiral from birth just through circumstance rather than choice.
Read more
Report abuse

James Boyce
3.0 out of 5 stars Good read but slightly confusing story flow.
Reviewed in the United Kingdom on 8 May 2021
Verified Purchase
I loved this book, but found it a difficult read. The story doesn’t seem to flow smoothly and jumps from person to person often backwards and forwards in time. I found my self having to read back on pages to find who the chapter was referring to. Important read though and able to absorb some of the history that makes the LGBT+ community so strong.
Read more
Report abuse

Amazon Kunde
5.0 out of 5 stars Heartbreaking but beautiful
Reviewed in Germany on 24 January 2019
Verified Purchase
Delicately told story of beautiful characters. Shed some tears while reading it so be ready! I was also reading this book to read about the ballroom scene back then but there’s not too much about it in the book. Definitely worth the read though!
Read more
Report abuse
See all reviews
Back to top
Get to Know Us
Make Money with Us
Let Us Help You
And don't forget:
© 1996-2021, Amazon.com, Inc. or its affiliates