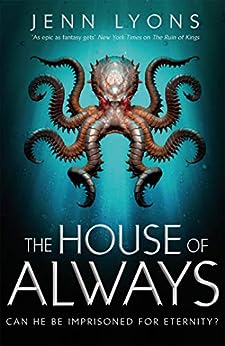 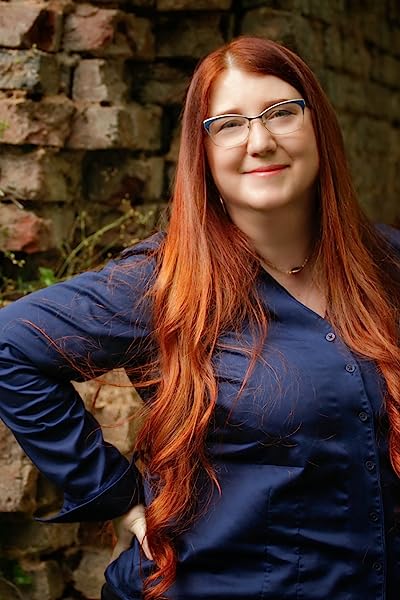 The House of Always: A Chorus of Dragons Novel 4 Kindle Edition

by Jenn Lyons (Author) Format: Kindle Edition
See all formats and editions
Sorry, there was a problem loading this page. Try again.

What if you were imprisoned for all eternity?

In the aftermath of the Ritual of Night, everything has changed.

The Eight Immortals have catastrophically failed to stop Kihrin’s enemies, who are moving forward with their plans to free Vol Karoth, the King of Demons. Kihrin has his own ideas about how to fight back, but even if he’s willing to sacrifice everything for victory, the cost may prove too high for his allies.

Now they face a choice: can they save the world while saving Kihrin too? Or will they be forced to watch as he becomes the very evil they had all sworn to destroy?

The House of Always is the fourth book in Jenn Lyons’s series A Chorus of Dragons.

Praise for A Chorus of Dragons

‘I loved it’ Lev Grossman, author of The Magicians

Trapped and running out of time, Kihrin and his allies must escape their demonic prison and save the world from Relos Var’s calamitous plans. This is perfect for fans of Robin Hobb, Joe Abercrombie and Patrick Rothfuss. --This text refers to an alternate kindle_edition edition.

Jenn Lyons lives in Atlanta, Georgia, with her husband, three cats and a nearly infinite number of opinions on anything from Sumerian mythology to the correct way to make a martini. Formerly a video game producer, she now spends her days writing fantasy. A long-time devotee of storytelling, she traces her geek roots back to playing first edition Dungeons & Dragons in grade school and reading her way from A to Z in the school library. She is the author of the series A Chorus of Dragons. --This text refers to an alternate kindle_edition edition.

Trapped and running out of time, Kihrin and his allies must escape their demonic prison and save the world from Relos Var’s calamitous plans. This is perfect for fans of Robin Hobb, Joe Abercrombie and Patrick Rothfuss. --This text refers to an alternate kindle_edition edition.

Jenn Lyons lives in Atlanta, Georgia, with her husband, three cats and a nearly infinite number of opinions on anything from Sumerian mythology to the correct way to make a martini. Lyons traces her geek roots back to playing first edition Dungeons & Dragons in grade school and reading her way from A to Z in the school's library. Formerly an art director and video game producer, she now spends her days writing fantasy. In 2020, she was nominated for the Astounding Award for Best New Writer. Her five-book Chorus of Dragons fantasy series begins with The Ruin of Kings. --This text refers to an alternate kindle_edition edition.

"Lyons has not only vaulted to the forefront of modern epic fantasy by delivering series entries in a timely fashion, but continues to stick the landing in excitement and with style points galore."--Booklist, starred review

"Lyons's incredible world continues to grow . . . a fully realized story of magic and mayhem."--Library Journal, starred review Praise for The Ruin of Kings: It's impossible not to be impressed with the ambition of it all, the sheer, effervescent joy Lyons takes in the scope of her project . . . a larger-than-life adventure story about thieves, wizards, assassins and kings to dwell in for a good long while.--The New York Times Ms. Lyons is all set to take her readers on a long journey indeed, unfolding and unfolding like brilliant origami. So far, though, not a hairy chest in sight, nor a languishing maiden. Fantasy has moved on, and is all the better for it.--The Wall Street Journal An impressive and highly accomplished debut . . . The Ruin of Kings makes both an ideal introduction to epic fantasy and a rewarding read for fans of the genre.--The Los Angeles Times [A] jaw-dropping, action-packed story of betrayal, greed, and grand-scale conspiracy . . . Lyons ties it all together seamlessly to create literary magic. Epic fantasy fans looking for a virtually un-put-down-able read should look no further.--Kirkus, starred review With the scope and sense of fatality of Patrick Rothfuss, and well-choreographed action sense of Brandon Sanderson, Lyons leaps into the big leagues of epic fantasy and sticks the landing.--Booklist, starred review Tightly plotted . . . its lore and memorable characters will leave epic fantasy fans eager for the second volume.--Publishers Weekly, starred review This stunning debut takes epic fantasy to a high level, portraying a world filled with magic, demons, gods, and dragons, in which politics and power plays are the laws of the land.--Library Journal, starred review Everything epic fantasy should be: rich, cruel, gorgeous, brilliant, enthralling and deeply, deeply satisfying. I loved it.--Lev Grossman, author of The Magicians --This text refers to an alternate kindle_edition edition.
Read more

Jenn Lyons lives in Atlanta, Georgia, with her husband, three cats, and a lot of opinions on anything from the Sumerian creation myths to the correct way to make a martini. At various points in her life, she has wanted to be an archaeologist, anthropologist, architect, diamond cutter, fashion illustrator, graphic designer, or Batman. Turning from such obvious trades, she is now a video game producer by day, and spends her evenings world building and writing fantasy. When not writing, she can be found using any of her various fountain pens at several local coffee shops.

4.3 out of 5 stars
4.3 out of 5
133 global ratings
How are ratings calculated?
To calculate the overall star rating and percentage breakdown by star, we don’t use a simple average. Instead, our system considers things like how recent a review is and if the reviewer bought the item on Amazon. It also analyses reviews to verify trustworthiness.

DadTheTooth
5.0 out of 5 stars How long until the finale?
Reviewed in the United Kingdom on 29 May 2021
Verified Purchase
Love this story and really want to read the next (I assume last, but could be very wrong) book. Having practically inhaled this one seems a shame not to have the next- oh well, I suppose I’d better learn patience:-(
Read more
Report abuse

Ben
5.0 out of 5 stars Excellent excellent excellent
Reviewed in the United Kingdom on 17 May 2021
Verified Purchase
Another Sterling performance from Jenn Lyons. This book kept me enthralled from the beginning.
It’s a mammoth undertaking reading it all but I have had very little sleep the past two days in an effort to burn through it. Well worth it.
Read more
One person found this helpful
Report abuse

Pat Noonan
1.0 out of 5 stars It's a slog
Reviewed in the United Kingdom on 9 September 2021
Verified Purchase
It's a tough, disjointed read which is ultimately unsatisfactory enough to kill the series for me before it's finished.

K. Nilson
2.0 out of 5 stars It's Trying, But.....
Reviewed in the United States on 1 July 2021
Verified Purchase
The story is well built but a little hard to accept at times . Even being a fantasy story there were times trying to follow the story when I went, "Really?" Also way too much LGBTQism going on. Enough already shoving these ideas down our throat. Focus on bettering the story and tying up loose ends so this series can belong up there with the rest of the "great ones."
Read more
2 people found this helpful
Report abuse

Kindle Customer
5.0 out of 5 stars Outstanding
Reviewed in the United States on 20 May 2021
Verified Purchase
Book number four in and it's still amazing! Interesting way of storytelling that the author has stuck with. I can't explain or do it justice,but it's refreshing.While the plot is intense and the well described world is amazing, the characterization definitely steals the show. I enjoyed the way that the main characters were put aside slightly and others were able to shine. Not a one is good, nor bad. Very complex characteristics that keeps you On the fence. I've been looking forward to this book and definitely was not dissapointed.
Read more
Report abuse
See all reviews
Back to top
Get to Know Us
Make Money with Us
Let Us Help You
And don't forget:
© 1996-2022, Amazon.com, Inc. or its affiliates