Temporarily out of stock.
Order now and we'll deliver when available. We'll e-mail you with an estimated delivery date as soon as we have more information. Your account will only be charged when we ship the item.
Delivery Rates and Return policy
Added
Not added
Add to Cart
$52.06
+ $3.00 Delivery
Sold by: Rarewaves UK
Sold by: Rarewaves UK 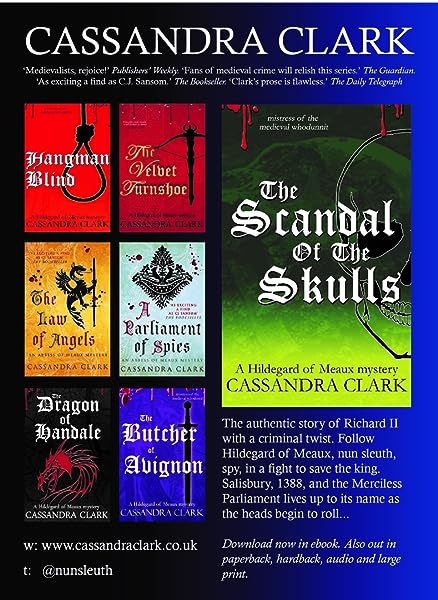 by Cassandra Clark (Author)
3.7 out of 5 stars 38 ratings
See all formats and editions
Sorry, there was a problem loading this page. Try again.

London, 1399. When the body of a young nun is discovered at Dowgate sluice, Brother Chandler is called in to investigate. But secretly acting as a spy for King Richard's cousin Henry Bolingbroke, Chandler is torn by conflicting loyalties, and his investigations will draw him into affairs of state - endangering himself and all those around him.
Read more
Previous page
Next page

A fresh series launch... whenever the focus is on Chandler, the strong grips. Readers will want to see more of this highly original protagonist-- "Publishers Weekly"

The history is meticulously researched and depicted, with sprinklings of fact on almost every page, so much so that Brother Chandler's sleuthing may appeal to nonfiction readers looking for variety in their reading just as much as the fans of Clark's popular Abbess Hildegard of Meaux series-- "Booklist"

Cassandra Clark is an award-winning scriptwriter for theatre, radio and television, and the author of the highly-acclaimed Hildegard of Meaux medieval mystery series.
Start reading Hour of the Fox, The (A Brother Chandler Mystery Book 1) on your Kindle in under a minute.

Intrepid, problem-solving Hildegard and the enigmatic and sexy Abbot Hubert de Courcy are accompanied much of the time by the abbot's two monks militant, Gregory and Egbert or by the innocent and love-smitten Brother Thomas.

Starting with Hangman Blind when Hildegard first sets out on a quest to establish her own priory, the dark side of England in the 1380's soon threatens everything she holds most dear.

Books in order after Hangman are: The Velvet Turnshoe, The Law of Angels,The Parliament of Spies, The Dragon of Handale, The Butcher of Avignon, The Scandal of the Skulls, The Alchemist of Netley Abbey, Murder at Meaux, Murder at Whitby Abbey and to come on 31st March 2021, Murder at Beaulieu Abbey. The Bookseller called it 'this stellar series.' I hope you think so too.

If you wonder why Hildegard, a feisty independent young widow, decided to become a nun read the short prequel Ten Weeks That Changed England Forever. Free on Kindle Prime.

This is history with a criminal twist. Hildegard, regardless of danger, tracks down the weirdly savage medieval murderers that disturb the peace and destroy the innocent. Meanhile King Richard II fights to save his throne and his life.

Hildegard herself is not averse to being led astray by passing love-lorn knights but it is the charismatic Abbot of Meaux who wins her heart. Vowed to celibacy, will they ever get it together, or are they destined to sleep alone forever?

Gothic towns, remote and sinister abbeys and the mysterious uncharted woodlands of medieval England are the background for Hildegard's sleuthing into the brutal conflicts of the time.

Cassandra says: don't read this is if you want magic swords and unrealistic characters with strange eyes. I'm fascinated by real people striving to live as we might have done. Ordinary people in extraordinary times. Ambitious, greedy, sexy and above all human, they tell a far stranger story than any fantasy, so if you like authentic history read the series and follow Hildegard down the dangerous byways of medieval England if you dare!

A new series featuring cult follower Brother Rodric Chandler begins with THE HOUR OF THE FOX, out now. Rodric has a dilemma. Sworn to the House of Lancaster and his master Henry Bolingbroke, should he further his master's evil intention to destroy the king or follow the path of loyalty to King Richard? Either way means death.

3.7 out of 5 stars
3.7 out of 5
38 global ratings
How are ratings calculated?
To calculate the overall star rating and percentage breakdown by star, we don’t use a simple average. Instead, our system considers things like how recent a review is and if the reviewer bought the item on Amazon. It also analyses reviews to verify trustworthiness.

Robert A. Pitts
5.0 out of 5 stars A great new character from Cassandra Clark
Reviewed in the United Kingdom on 8 March 2020
Verified Purchase
I bought this book as I am a great fan of the Hildegard of Meaux series by this author. I found that once I had started to read, I could not put it down. The way the author captures the period in history can only be by meticulous research. The character, Rodric Chandler is a delight and it is easy to understand the situation that he finds himself in.
I cannot wait until the next book in the series. At least I hope that it will be a series. I am grateful to Cassandra Clark for this fascinating new character. It is easy to immerse yourself into the time and place where this book is set.
Read more
3 people found this helpful
Report abuse

Posy Hill
5.0 out of 5 stars Rattling good read
Reviewed in the United Kingdom on 6 February 2021
Verified Purchase
An excellent who-done-it, chock full of atmosphere and intrigue, set against the backdrop of Bolingbroke‘s coup and capturing the mood of uncertainty which must have pervaded the country. Great characters too - can’t wait for the sequel.
Read more
One person found this helpful
Report abuse

Anji of the Nidge
2.0 out of 5 stars Hour of the fox.
Reviewed in the United Kingdom on 7 November 2021
Verified Purchase
Most confusing book I ever read. It flitted from him to her to master to this housekeeper to that housekeeper to chandler and I struggled to work out who was who.
I might try book two. Only might.
Read more
Report abuse

Kindle Customer
3.0 out of 5 stars Confusing
Reviewed in Canada on 7 January 2022
Verified Purchase
Did not like all the jumping about of the characters. Made for a long confusing read. Nothing to grab my attention when I was trying to figure out who was talking.
Read more
Report abuse
See all reviews