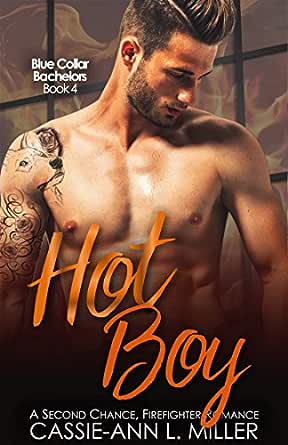 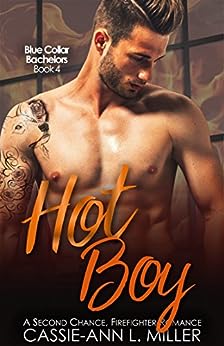 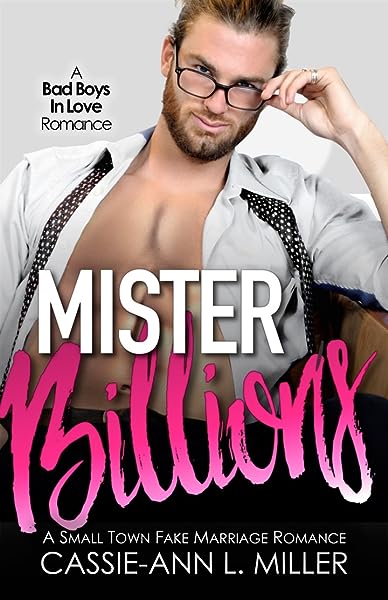 Suez
TOP 1000 REVIEWER
5.0 out of 5 stars Loved it !!
Reviewed in Australia on 18 April 2018
Funny, definitely entertaining I highly recommend you’ll love it too. This is a voluntary review of an advanced copy
Read more
Helpful
Comment Report abuse
See all reviews from Australia

dita
5.0 out of 5 stars A MUST-READ for second chance small town romance lovers
Reviewed in the United States on 26 April 2018
Verified Purchase
I loveee this sweet second chance small town romance and this one is definitely one of my favorite books from Cassie Ann L. Miller.
He broke her heart years ago and now she's back in town, he'll do anything for a second chance but she'll do anything to guard her heart. Yes I love this kind of story.
There's drama, twists and it's packed with emotions and of course there are plenty steaminess.
Love how the author keep me guessing what exactly happened in the past, what's the secret.

As for characters. Loveeeee Ben, he's a hot firefighter, that's enough reason to love him but add the determination to get Annie's heart and the possessiveness, this man really has my heart.
And Angie, I admire this girl, she's a smart stubborn girl, love how she's trying to climb her way up after hit the rock bottom.
These two bring all the funny sweet steamy banter, and they're absolutely perfect for each other. Therefore I really like this couple.
Hopefully there'll be a book for Sophia and Madden.

If you're looking for a sweet second chance romance, this one is a MUST-READ.

Viper Spaulding
5.0 out of 5 stars Aww, this wonderful book has ALL the feels!
Reviewed in the United States on 18 April 2018
Verified Purchase
Angie is back in her hometown after a disastrous error in judgment, but she quickly realizes that her sister needs her and her heart really needed to come home. Except, Ben is still there. And he still wants her. Despite the way he ripped her heart out seven years ago. He's trying to make it up to her, but Angie is determined not to make the same mistake again.

This is one of the better second-chance romances I've read. The reasons behind their initial split felt realistic, and the fall-out was handled in a believable manner. Angie's relationship with Ben's mom had me in tears a couple times. So sweet. Their HEA was hard-fought and well worth waiting for, and it was so nice to get a little more time with Sophia. I can't wait to read more about her phoenix-like journey. While I did receive an ARC of this book, I loved it so much I purchased it right away.
Read more
2 people found this helpful
Helpful
Sending feedback...
Thank you for your feedback.
Sorry, we failed to record your vote. Please try again
Report abuse

Fleur W
4.0 out of 5 stars Definitely a hot read!
Reviewed in the United States on 13 May 2018
Verified Purchase
Angie is back in town after things took a nose dive at her previous hospital that left her career back at square one and reputation now questionable. If that isn't bad enough Ben her first love who broke her heart is still in town and now a sexy firefighter, but she can resist him right? I really loved Angie as I get she made a mistake and she is trying to make the best of a bad situation and she gets to be with her sister Sophia (who we have met via previous books in the series) who by now is heavily pregnant and all alone. There are plenty of emotions in this one, not just for Ben and Angie, but her family and his and this is what keeps me hooked on these books as the world building is freaking great! I hope we get to see Sophia next because that girl well and truly needs her HEA!
Read more
2 people found this helpful
Helpful
Sending feedback...
Thank you for your feedback.
Sorry, we failed to record your vote. Please try again
Report abuse

L. M. Hoak
5.0 out of 5 stars Second Chances
Reviewed in the United States on 26 April 2018
Verified Purchase
This one was a 4.5 for me. Second chance stories are tough because of all the hurt feelings and years wasted. Ben thought he made the right decisions at the time when he was younger but neither one got over it. Now they are back in the same town again with feelings and fears rearing up again. Can they move beyond the past? Is there a need for a third chance? I really liked Ben and was happy not to have him appear too piggish in the beginning (ala Charlie at the end of Lover Boy). Angie wasn't my favorite heroine but she grew on me a little. I wished that we had more of an update on Clyde and didn't skim over that.

Honestly, I read all the books in this series one right after the other, eating them up. Now I'm antsy for the next one to come out! Can't wait to see if it's Sophia's story but either way I'll be grabbing it.
Read more
One person found this helpful
Helpful
Sending feedback...
Thank you for your feedback.
Sorry, we failed to record your vote. Please try again
Report abuse

Cooper4488
5.0 out of 5 stars Ben and Angie
Reviewed in the United States on 25 April 2018
Verified Purchase
Another great one from Cassie-Ann Miller!! Angie has to move back to her home town for an intership after getting caught with her pants down. She really doesn't want to be back home and does not want to run into her first and only love Ben. Ben is a hot, dirty talking fireman that broke Angie's heart. Ben is still in love with Angie after all these years and as soon as he sees her he wants her back. But Ben is holding onto a secret and Angie doesn't want her heart broke again. Can they work through the hurt or will the secrets of the past rip them apart?
Read more
One person found this helpful
Helpful
Sending feedback...
Thank you for your feedback.
Sorry, we failed to record your vote. Please try again
Report abuse
Load more international reviews

De Anna Henley
5.0 out of 5 stars Rescue me, take me in your arms.
Reviewed in the United States on 1 May 2018
Verified Purchase
Ben.
My Gigi.
She's back.
And she doesn't want anything to do with me.
I'm going to do everything I can to win her back.
And this time...
I'm not letting her go.
Angie.
I'm back in my hometown. And not by my choice.
Did HE really have to show up on my first at work?
He says he wants me back.
Can I really trust him again or will I end up more broken than the last time?
This is a great tale of second chances and the obstacles we have to hurdle to get across the finish line.
I voluntarily received and read this ARC for an honest review.
Read more
One person found this helpful
Helpful
Sending feedback...
Thank you for your feedback.
Sorry, we failed to record your vote. Please try again
Report abuse

Heather S
5.0 out of 5 stars On fire!!
Reviewed in the United States on 30 April 2018
Verified Purchase
I really enjoyed this book, I always enjoy books by Cassie-Ann L Miller. She is such a fantastic author and she creates some amazing characters. This book was steamy and laugh out loud and had a few twists that I didn't see coming. Such a great second chance romance between Angie and Ben. The story just pulled me in from the very start. Plus who doesn't love a hot firefighter. 5 stars!
Read more
One person found this helpful
Helpful
Sending feedback...
Thank you for your feedback.
Sorry, we failed to record your vote. Please try again
Report abuse

javamonster
4.0 out of 5 stars Funny Moments with a Little Meta
Reviewed in the United States on 23 April 2018
Verified Purchase
Had some funny moments (especially in the hospital about 3/4 of the way through, where the hero’s mother breaks some personal news that you wouldn’t expect) but overall, felt scattered, like the pieces were all there, but the puzzle wasn’t quite aligned and put together. Things were brought up (see above) for example, that only made temporary problems that weren’t dealt with again. Conflicts resolved too quickly (and didn’t seem to build up). Personality flaws (man-whoring) that were made a big deal about in the beginning...petered out and weren’t mentioned again. A secondary character is made out to be one way, and then we’re told he’s actually something else, even though we heard otherwise, thereby negating the author’s conflict set-up. (Why?)

I wasn’t ever sure if I *liked* the heroine, and I’m not sure why. She felt like a collection of personality traits. I didn’t get a real bead on her. I’ve already gone and purchased all the books in this series (and read this one first) so, hopefully I won’t feel as disconnected by the story in the earlier ones.

All this said, other readers probably won’t have the same reaction I had. And the writing is good, too, with good line editing. Onward!
Read more
4 people found this helpful
Helpful
Sending feedback...
Thank you for your feedback.
Sorry, we failed to record your vote. Please try again
Report abuse

GrandmaMinga
4.0 out of 5 stars She fouled up, now she's back in her hometown doing her internship at the local hospital.
Reviewed in the United States on 16 February 2019
Verified Purchase
Years before the guy she was in love with broke up with her. She never got over it and he's still around, now he's a hot firefighter, and he will be in and out of the hospital almost daily.
Read more
Helpful
Sending feedback...
Thank you for your feedback.
Sorry, we failed to record your vote. Please try again
Report abuse
Load more international reviews

Heather
4.0 out of 5 stars 4 stars
Reviewed in the United States on 29 March 2019
Verified Purchase
This story has plenty of drama, and some sweet and sexy moments in it. I enjoyed reading it.
Read more
Helpful
Sending feedback...
Thank you for your feedback.
Sorry, we failed to record your vote. Please try again
Report abuse

Cinders
5.0 out of 5 stars Smoking hot!
Reviewed in the United States on 18 April 2018
Verified Purchase
A smoking hot story about second chances! You won't want to miss it.
Read more
2 people found this helpful
Helpful
Sending feedback...
Thank you for your feedback.
Sorry, we failed to record your vote. Please try again
Report abuse