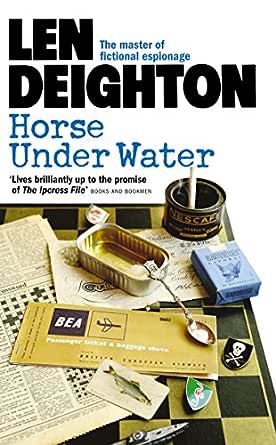 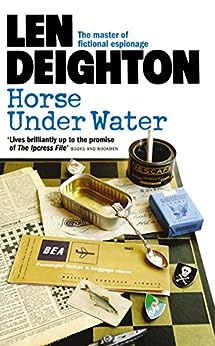 ‘Quite marvellous… funny too’ Punch

‘The poet of the spy story.’ Sunday Times

Born in London, Len Deighton served in the RAF before graduating from the Royal College of Art (which recently elected him a Senior Fellow). While in New York City working as a magazine illustrator he began writing his first novel, The Ipcress File, which was published in 1962. He is now the author of more than thirty books of fiction and non-fiction. At present living in Europe, he has, over the years, lived with his family in ten different countries from Austria to Portugal. --This text refers to the paperback edition.

4.2 out of 5 stars
4.2 out of 5
76 global ratings
How are ratings calculated?
To calculate the overall star rating and percentage breakdown by star, we don’t use a simple average. Instead, our system considers things like how recent a review is and if the reviewer bought the item on Amazon. It also analyses reviews to verify trustworthiness.

Phil Webster
5.0 out of 5 stars Deighton’s Cynical Spy
Reviewed in the United Kingdom on 20 February 2017
Verified Purchase
I first read this book over 50 years ago, when I was 14 years old. I thought at the time that the author had a great writing style, and that he seemed to be really knowledgeable and COOL. And re-reading the book now (for about the fifth time over the years), my opinion is just the same.

When Deighton’s first books were published in the early 1960s, they were welcomed as painting a more realistic picture of the world of espionage than did the fantasy world of James Bond. Whether it is actually a true picture or not, Deighton certainly makes you FEEL as if you are getting a glimpse of the real spy world.

In my view, Deighton’s first few spy novels are by far his best: “The Ipcress File”; “Horse Under Water”; and “Funeral in Berlin”. I feel that after this period Deighton went downhill, losing the lightness of touch and sharpness that characterise these early books.

This book is Deighton’s second. It is not as well known as “The Ipcress File” and “Funeral in Berlin”, probably because it was not made into a film like those two. (“Billion Dollar Brain” was also turned into a film, but in my view that film is best forgotten.)

The atmosphere of these early Deighton spy stories is typified by the pages at the beginning of the 1960s Penguin paperback editions where information about the author is given. They are done as if they were files that some organisation held on Deighton. But the amusing thing is that the physical description and life-story given of Deighton in “Horse Under Water” are totally different from those given in “Funeral in Berlin”. This perfectly conveys the feeling that we are entering a world where nothing can be taken at face value.

“The Ipcress File” and “Funeral in Berlin” have plots involving the Cold War between the capitalist West and the so-called “communist” (I would say bureaucratic state capitalist) East. But this book is different in that the plot involves events relating back to the Nazis and the Second World War.

The book is best enjoyed as a series of vividly portrayed set pieces, rather than by worrying too much about the plot. For example, there is a really amusing little chapter in which our nameless hero attends a diving course at a naval base. (Deighton has said that this was based on his own experience on just such a course, which the Navy allowed him to attend while he was researching the novel.)

It has been rightly pointed out that the nameless narrator (who becomes Michael Caine’s “Harry Palmer” in the films) is reminiscent of Raymond Chandler’s private detective, Philip Marlowe, but transferred from the world of crime to the world of espionage. The two characters certainly both have the same mixture of wise-cracking humour, cynicism, sharpness of mind, and integrity. (Though with Deighton’s character there is less emphasis on the last of these – his job involves more deviousness than Marlowe’s.)

The other “realistic” spy story writer who came along at about the same time as Deighton was John Le Carre. But I’ve always preferred Deighton (at least the early Deighton), as I find Le Carre’s books rather humourless and bleak. (Though the TV version of “Tinker, Tailor, Soldier, Spy” with Alec Guinness is brilliant.)

These early Deighton spy stories are excellent entertainment, but we also need to remember that the real world of secret services is a nasty one. They do not just spy on each other. They spy on (and often persecute) dissenting voices within their own countries, and they conduct dirty tricks such as the toppling of elected governments (as the CIA did in Chile). There are no heroes or “good guys” in the real secret world: just villains on both sides.

R de Bulat
4.0 out of 5 stars Serpentine plot
Reviewed in the United Kingdom on 5 December 2016
Verified Purchase
This is Deighton'e second book and quite different in style to The Ipcress File, with the principle character now working with Dawlish, a spymaster who reappears in several of the authors books. The storyline involves a complex cast of characters and events that are left-overs from WWII and what might or might not be left in a sunken U Boat off the coast of Albufeirra, Portugal. The serpentine plot never fails as the action moves between London and Portugal several times, keeping the reader guessing as to what is really happening, right up to the end when the case file can be closed. Cynical, pragmatic, weary: the characters all play their roles of deception and subterfuge in a last shout attempt to cover up something that is just a fiction, but one that too many people still believe in and will kill to maintain.
Read more
Report abuse

Niel Black
5.0 out of 5 stars Classic spy novel
Reviewed in the United Kingdom on 6 April 2012
Verified Purchase
The early Len Deighton spy books are unbelievably good - at least as good as, but now less read than, early Fleming and Le Carre. Like his others, Horse Under Water has a cynical hero (played by Michael Caine in films Funeral in Berlin and the Ipcress File), much double dealing and betrayal, descriptive writing (the account of a 1960s Royal Navy dive school course alone is worth the price), snappy one liners and dialogue ("Blood, vomit and alcohol, it should be on the [Gribraltar] coat of arms" "It's on just about everything else") and enough action and glamour to keep you interested (Bond rather than Smiley levels).

Horse Under Water revolves round a WW2 German submarine sunk off Portugal, treachery in the British establishment, infighting between British spy agencies, the international drugs trade - so there is no shortage of stuff going on. The atmospherics are beautifully detailed (Whitehall, Gibraltar, fascist Portugal) with Deighton's love of food and drink (he also had a Guardian cooking column) thrown in, with plenty of characters thrown in (from spy masters to Royal Navy petty officers).

You may particularly enjoy the book if you like Deighton or Le Carre, or the Michael Caine films. But frankly, if you just feel like a witty, fast moving and well written thriller, you can't do much better than this.
Read more
6 people found this helpful
Report abuse

Martin Swift
5.0 out of 5 stars In the Book He Really is a Man with no Name...
Reviewed in the United Kingdom on 28 July 2012
Verified Purchase
I liked reading Len Deighton's books many years back when i got them in paperback book form and after many reads it would end up all curled and looking in neeed of care and attention.
Len Deighton has the character narrating the whole story and yet has no name...the name of Harry Palmer would be given to the character when many came out as a featyre film starring Michael Caine...now Sir michael Caine.
Having several 'Kindle's' I decided to get them and re-read these stories, that seem to still fit into today'severyday life, although the USSR has now gone and the political map of europe has been re-drawn...the stories are as crisp today as when first written and published.
Horse Under Water covers the life of our narrator hero and with vauge mentions of his own time of being in the military and also his finding out about the past of those he come in contact with, especially in Portugal being the main area of the story and how a sunken German U-Boat bring about the commencement of the drug trade by ex-military from the United States, France, and Germany into a web of intrigue...Len Deighton at his best...read it.
Read more
2 people found this helpful
Report abuse

Trik
3.0 out of 5 stars Ultimately unsatisfying fare
Reviewed in the United Kingdom on 2 May 2016
Verified Purchase
This is only the second of Deighton's books and it shows. I first read it decades ago, when the 1960s were not so far distant and remember enjoying it very much. However, now that I have read many more of Deighton's books, I notice the difference. In Horse Under Water there was very little character development or atmosphere, and I never got the feeling of time or place that I did with the much later Bernard Samson series, for example. I was hoping for a feast, but all I got was a small helping of a rather thin soup.

As regards this Kindle version, lots of typos, all of which I have reported.
Read more
Report abuse
See all reviews
Get FREE delivery with Amazon Prime
Prime members enjoy FREE Delivery and exclusive access to movies, TV shows, music, Kindle e-books, Twitch Prime, and more.
> Get Started
Back to top
Get to Know Us
Make Money with Us
Let Us Help You
And don't forget:
© 1996-2020, Amazon.com, Inc. or its affiliates