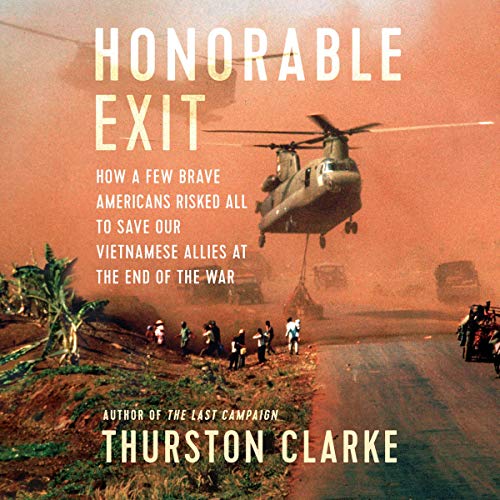 Honorable Exit: How a Few Brave Americans Risked All to Save Our Vietnamese Allies at the End of the War

Merle L. Pribbenow
3.0 out of 5 stars Well Written, Horrible Title, A Number of Mistakes
Reviewed in the United States on 12 July 2019
Verified Purchase
As one of those evacuated from Saigon in 1975, this was a book I felt compelled to read. I found the book to be well-written and informative, but the title the author chose is terrible (there was nothing honorable about our exit from Saigon) and the book contains a number of errors, such as five VN Marine battalion commanders committing suicide (page 73), Vung Tau's beaches being occupied by North Vietnamese troops two weeks before Saigon fell (page 173), etc. However, perhaps the worst problem is the author's failure to inform his readers of the background of one of the book's heroes - Walter Martindale. While Martindale's actions in Vietnam were certainly praiseworthy, in the 1980s he was sentenced to ten years in prison for involvement in a bizarre kidnapping/murder for hire plot. Nowhere in the book does the author even mention this fact, which certainly would be relevant to the reader in determining the reliability of Martindale's account of the events that the author describes in his book.
Read more
9 people found this helpful
Report abuse

Kindle Customer
5.0 out of 5 stars Enlightening Facts About Events in Vietnam and The US, Preceding the Fall of Saigon
Reviewed in the United States on 29 July 2020
Verified Purchase
Well researched and enlightened description, concerning events and facts, leading to the fall of Saigon and the South Vietnamese Government. Anyone that had experience with the Vietnamese people in the South, especially during the latter stages of the Vietnam War, will find this book of high interest, as to how it all actually ended. Readers will gain knowledge about all the main players and officials in the South and the US Government, as to their response to what was actually transpiring at the end. All of my wife's relatives were actually there at the end and they experienced the described events that transpired in helping them to vacate, actually having to leave all their possessions and relocate from Saigon, at the very last. Their actual knowledge matches what is described in "Honorable Exit".
Read more
One person found this helpful
Report abuse

Amazon Customer
5.0 out of 5 stars A gripping, often moving read - a catharsis for those who were there
Reviewed in the United States on 26 April 2021
Verified Purchase
As Americans get ready to abandon yet another ally on the battlefield, (think the Kurds in Syria and now the Afghans), it is timely to read about an earlier abandonment of allies on the battlefield - in 1975 in South Vietnam.
In spite of Nixon's promise to support the South both economically and with air power if the North were to mount a new invasion, Congress decided the Southerners would be better off if we pulled the plug. In the face of imminent disaster many Americans on the ground chose to ignore orders and improvise ways to save loyal friends and colleagues. This book tells the story of how these "righteous" heroes rescued 130,000 in the final weeks of the war. Clarke has combined thrilling individual stories of escape with deep research into the thoughts and actions of officialdom in Saigon and Washington. This book may be, at last, the catharsis those who were there have been waiting for all these years.
Read more
Report abuse

Bruce Kinsey
5.0 out of 5 stars A fine account
Reviewed in the United States on 9 June 2021
Verified Purchase
... of the American collapse in 1975. Heroism... Stupidity... Inventiveness... Stubborn blindness... Disorganization galore... Venality..... This book will make you both proud and disgusted at what our countrymen did., and what too many failed to do.
Read more
Report abuse

R. Kostka
5.0 out of 5 stars Great book
Reviewed in the United States on 19 August 2019
Verified Purchase
I was touched by the effort made by so many Americans to save the people who had put their lives on the line working for us during the Vietnam war.
Read more
One person found this helpful
Report abuse
See all reviews
Back to top
Get to Know Us
Make Money with Us
Let Us Help You
And don't forget:
© 1996-2021, Amazon.com, Inc. or its affiliates