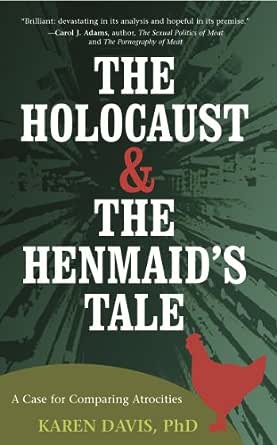 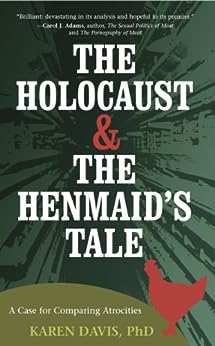 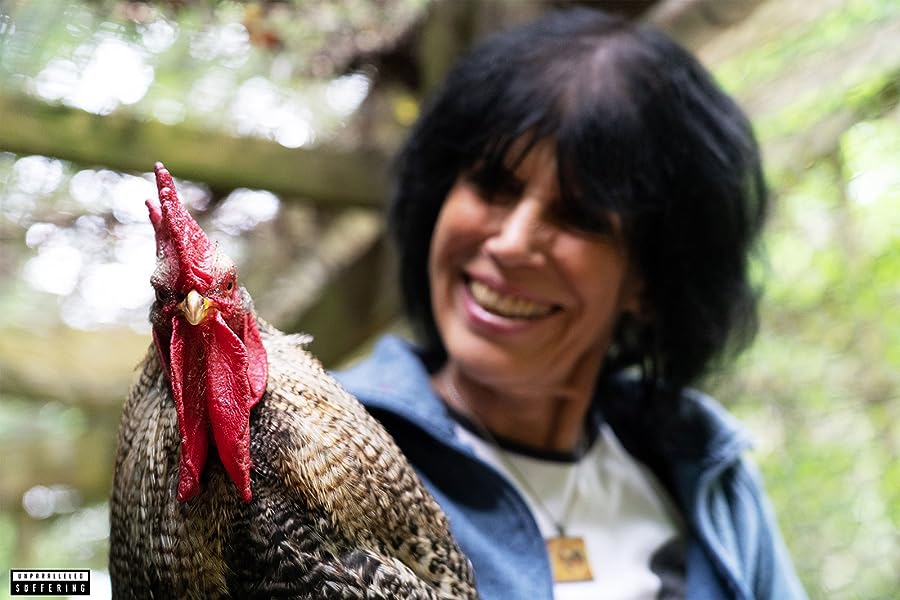 The Holocaust and the Henmaid's Tale: A Case for Comparing Atrocities Kindle Edition

Karen Davis, Ph.D. is the President of United Poultry Concerns. She is the author of Prisoned Chickens, Poisoned Eggs: An Inside Look at the Modern Poultry Industry. She lives in Machipongo, Virginia. --This text refers to the paperback edition.
click to open popover

Founder and president of United Poultry Concerns, Karen Davis has played the major role in taking domestic fowl - the most abused and violated animals in America - from the neglected margins of the animal protection movement to their present status as a central focus of campaigns against factory farming. Her books, Prisoned Chickens, Poisoned Eggs and More than a Meal: The Turkey in History, Myth, Ritual, and Reality are the standard animal rights works on domestic fowl.

Her newest book, The Holocaust and the Henmaid's Tale, is an invaluable contribution to one of the most contentious debates plaguing the animal rights community. But to understand why, we have to make a quick trip back in time.

A Holocaust: It's What's for Dinner

Isaac Bashevis Singer was a Jewish refugee from Hitler's Europe whose haunting novels and stories form an extended meditation on the Holocaust. In one of those stories, "The Letter Writer," the protagonist observes that "In relation to [animals], all people are Nazis; for the animals it is an eternal Treblinka."

In 2002, holocaust historian Charles Patterson picked up on Singer's theme. Eternal Treblinka: Our Treatment of Animals and the Holocaust argued that morally, psychologically, and logistically our imprisonment and murder of animals is equivalent to the Nazis' treatment of Jews, Gypsies, homosexuals, and other victims of their blandly efficient murder machine.

A firestorm of criticism quickly ensued, summarized in an Anti-Defamation League press release calling the display "abhorrent," and asserting that "Abusive treatment of animals should be opposed, but cannot and must not be compared to the Holocaust. The uniqueness of human life is the moral underpinning for those who resisted the hatred of Nazis and others ready to commit genocide even today." The issue split the animal rights community. Some activists defended the PETA display; others worried that the animals' cause would suffer from the backlash.

Into these whitewater rapids, Roberta Kalechofsky, founder and president of Jews for Animal Rights, launched Animal Suffering and the Holocaust: The Problem with Comparisons, a small book (59 pages) in which she argued that while our enslavement and murder of animals is a horrific crime that must be stopped, comparisons to the Jewish holocaust are illegitimate. (Kalechofsky's bona fides as an animal rights advocate are unassailable. For more than two decades, she has been a powerful and pioneering voice for animals.)

First, Kalechofsky argues that the Jewish holocaust was the end product of centuries of historical and cultural evolution that make it a unique event that cannot be meaningfully compared to anything else. And second, if the Jewish holocaust is allowed to become a "generalized metaphor" (pg. 34) for every kind of atrocity, it becomes devalued and loses its meaning.

From Treblinka to Tyson's

The Holocaust and the Henmaid's Tale is Karen Davis' rebuttal. Her "henmaid" is a battery chicken on a factory farm, whose life of deprivation, devaluation, depersonalization, and early uncomforted death reminds Davis of the eponymous "Handmaid" in Margaret Atwood's dystopian novel - and of the victims of fascism in Hitler's camps. When she is talking about her beloved chickens, Davis' compassion for the plight of our animal victims makes any merely intellectual argument against comparing their suffering to ours seem facile and self-serving.

It is on this foundation of bone deep compassion that Davis constructs her defense of comparing atrocities. First, she argues that while every atrocity is a unique event in terms of the historical, social, economic, and cultural conditions that led to it, they are all alike in the suffering that they cause, and from a moral standpoint, it is the suffering that matters. Thus, Davis argues that "An atrocity can be both unique and general." And since one sentient individual can never truly feel the pain of another, comparisons of pain - metaphors of pain, if you will - are the only way that we can feel empathy and compassion for others, and the only way that we can learn to become moral beings. Thus, comparisons of atrocities are an essential part of the process by which we become ethical individuals who create an ethical society.

It is not the Jewish holocaust that is unique - from ancient times, genocide has been a commonplace of human history - it is our sensitivity to it that is unique, and if this unique sensitivity can be used to awaken a heightened moral awareness of other atrocities, including the atrocities we commit against animals, that is a valid and valuable use of the holocaust metaphor.

The Holocaust and the Henmaid's Tale is not a diatibe. It is, in fact, solidly within the tradition of the best kind of academic writing, judicious, carefully reasoned, free of jargon, and accessible to the general reader.

Quoting Isaac Bashevis Singer, Davis reminds us that, "[T]here is no evidence that people are more important than chickens." Then she adds, "There is no evidence, either, that human suffering, or Jewish suffering, is separate from all other suffering, or that it needs to be kept separate in order to maintain its identity. But where, it may be asked, is the evidence that we humans have had enough of inflicting massive, preventable suffering on one another and on the individuals of other species, given that we know suffering so well and claim to abhor it?"

Norm Phelps is the author of The Dominion of Love: Animal Rights According to the Bible and The Great Compassion: Buddhism and Animal Rights.

Heather Altman
5.0 out of 5 stars Perfect
Reviewed in the United States on 25 October 2018
Verified Purchase
What I needed
Read more
Helpful
Sending feedback...
Thank you for your feedback.
Sorry, we failed to record your vote. Please try again
Report abuse

Amazon Customer
5.0 out of 5 stars beautiful words explain violence and why it should end
Reviewed in the United States on 20 August 2012
Verified Purchase
Well written, great footnotes, a book for every shelf. Please read this book if you read anything this week. It explains how,and gives reasons for, but nothing can really explain Why we torture animals. Thank you Ms Davis, for a thought provoking book that left me with tears and hope.
Read more
One person found this helpful
Helpful
Sending feedback...
Thank you for your feedback.
Sorry, we failed to record your vote. Please try again
Report abuse