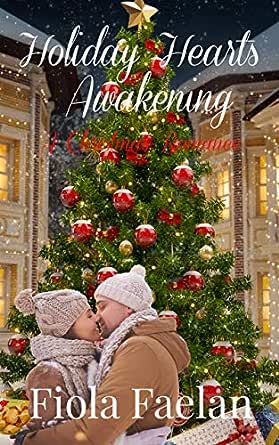 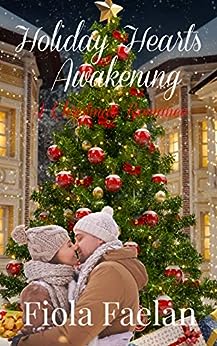 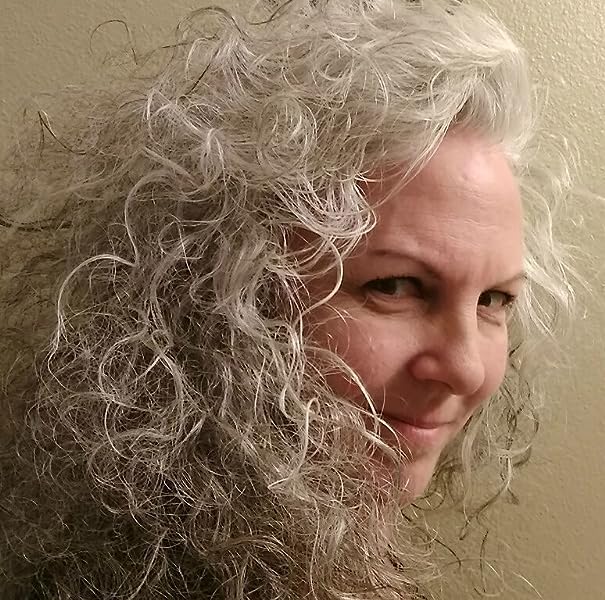 Nicole Laverdure
4.0 out of 5 stars Holiday Hearts Awakening: A Christmas Romance
Reviewed in the United States on 9 September 2016
Verified Purchase
Fiola Faelan is a new-to-me author. What a nice way to discover her books and style of writing by reading a romantic novella. This contemporary, Holiday Hearts Awakening, contains sexually graphic scenes that may offend young readers, but it’s well written with finesse and tenderness.

This short novella tells the story of Natalie, Zach, and his charming daughter Belle. Natalie was once married to a man who abused her. One day, a tragic event happened and she still blames herself for the death of her young son, Matty. For her, Christmas is not worth celebrating anymore! When her home goes up in smoke, she has no one to turn to except to her gorgeous neighbor, Zach. Both have been scarred in their past and don’t want to take a chance of loving again. But, his cute little girl named Belle will do anything to reunite these two. Since she is recovering from surgery and still coping with her grandma’s death, Natalie is still a fragile person. But Zach is a patient man and willing to wait for her. Slowly with time, Natalie will feel secured around Zach and Belle. They will start sharing secrets, and trust will be part of their lives again. Will Natalie and Zach take another chance at love?

The chemistry between the two is so sensual that sparks flare all over to create a beautiful passion!
Read more
3 people found this helpful
Report abuse

Grady Harp
5.0 out of 5 stars “She loves Christmas and wants the neighborhood to be pretty. I’ll make sure she doesn’t bother you again.”
Reviewed in the United States on 2 October 2016
Verified Purchase
Oregon author Fiola Faelan has traveled widely, taking in all manner of adventures and visual and physical stimuli to prepare for her stories. This is her debut novel and for a lady who has experienced such a rich and rewarding life this book offers a hint of her imagination and forays.
From the opening pages of Fila’s novel we have a clear picture of the thrice-operated Natalie, her fatigue with things Christmas, and the man who is about to alter her life. Example: ‘Natalie: The porch shook as long, strong legs took three steps in one stride, a muscled arm snaking around the little girl. Her eyes jerked to a harshly handsome face, pinned by sharp gray eyes narrowed beneath dark brows. Her gaze dropped to full lips seamed shut in a hard line slashed across a fallen-angel face framed by jet black, wavy hair. He looked like a throwback to some Highland laird with his hair just brushing his collar, his wide-as-a-broadsword shoulders straining a forest green polo shirt. Her gaze took in his sexy washboard stomach and long legs showcased in jeans that molded to tight hips and muscular thighs. She shook her head to clear the sensuous picture of him as a Highland laird in a kilt. At least ogling the angry father beat back the last vestiges of her panic attack. It had been years since she’d looked twice at a man. The universe was completely screwed up if her libido decided to be awakened from its deathbed by an angry man with a child Matty’s age.’The pot is on the stove and the steam is coming – in a bit….

Fiola offers a fine synopsis of her story: ‘The last thing Natalie needs in her life is a handsome-as-sin single father living right next door. What she wants to do is shun the world and embrace her broken heart. She regrets snapping at his little girl over something as silly as Christmas lights, but nothing in the world will change her mind about taking part in holiday hoopla or letting a cherub, or her sexy father, into her life. Zach's decision to ignore his snarky, smoking-hot new neighbor is an easy one, even if he feels a tug of regret he won’t get to know her better. He wants nothing to do with a woman who would snap at his little girl over something as trivial as decorating for the holiday. Neither is prepared for hearts tripping and emotional barriers falling when Zach snatches her from the flames engulfing her home and ends up tucking her into his spare bedroom. Little does he know his ability to play nothing more than caretaker until she's back on her feet is nothing more than smoke and mirrors. Will holiday hearts awaken to passion and new love, or will Zach and Natalie let this chance at new love pass them by?’

Within the confines of a short novella Fiola has sculpted several characters whose every aspect – physical, emotional, libidinous, etc – are fully developed. It is terrific story of how two lonely and disconsolate people (the distraught and surgically assaulted Natalie and the veteran returned from combat – both isolated and alone) bring life back into being! Strong stuff, this (and steamy) and a fine little debut novella from one Fiola Faelan. Grady Harp, October 16
Read more
One person found this helpful
Report abuse

Two people not looking for love happen to cross path. Both Natalie and Zach are carrying baggage from the past. Zach is trying to protect his daughter Belle from his dillusional ex-wife while Natalie is dealing with the loss of her son and grandmother. They have no time for love or any desire to welcome anyone else in their lives. During this particular Christmas season tho, will their hearts awakening. Will love win in the end despite the terrible first impression they made with each other? It is a short and spicy, sweet and sensual novel. You wont regret reading it.
Read more
Report abuse

mint tea
4.0 out of 5 stars Sweet and spicy love story!
Reviewed in the United States on 6 October 2016
Verified Purchase
This is one of those classic heartwarming stories where the characters make very bad first impressions on each other at their first meeting. In this installment, Natalie is suffering from the recent loss of her grandmother and so much more. When she meets Zach and his daughter, she wasn’t expecting to have company and was caught off guard. However, when something much unexpected happens, things start to change and inhibitions are broken down until they can have a conversation that is meaningful. The back story sections and the relationship between Natalie and her cousin are very much appreciated and I really like that she has someone that she can count on, even when she can’t appreciate it. The story is told in a way that I really liked and turned out in a manner that I really approve of as well. There is a little bit of sensuality in the book too, which gives it a little more kick.
Read more
One person found this helpful
Report abuse
See all reviews
Get FREE delivery with Amazon Prime
Prime members enjoy FREE Delivery and exclusive access to movies, TV shows, music, Kindle e-books, Twitch Prime, and more.
> Get Started
Back to top
Get to Know Us
Make Money with Us
Let Us Help You
And don't forget:
© 1996-2020, Amazon.com, Inc. or its affiliates