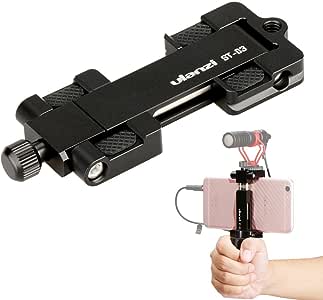 Description:
You need a Safety and High Quality Phone Tripod Mount ,No ,not only about that ,and a Multi-function and Pocket Size Phone Holder .
Yes ,You need Ulanzi ST-03.
A new patent Pocket Size design with CNC machined from solid aluminum quality ,Phone is locked in place with a steel bolt (not a spring!)And a Hidden Cold Shoe Mount Design .
What`s More ,It can Hold smartphones from 2.28" to 4.1" wide,even the 7in screen phones .


What is in the box?
1x Ulanzi ST-03 Metal Phone Tripod Mount

gingersnapbiscuit
4.0 out of 5 stars Great concept, slightly let down by execution
Reviewed in Australia on 14 January 2020
Verified Purchase
What I love:

It folds down very neatly, exactly as advertised. Slim enough to slip in a shirt pocket, goes much smaller than any other smartphone mount I've seen, and in that regard would make a great replacement for whatever mount came with your selfie stick/tripod/etc (so long as that can be removed and replaced via 1/4 screw, always look for a model that can do this!)

It feels very sturdy, and the fact that it screws on means that (unless the screw strips), this won't get slack over time like a spring-loaded mount will. You can be sure your phone is not going anywhere. (Almost - more on that in a moment.)

It has an onward cold shoe mount, without which I wouldn't even consider buying a standalone phone mount. (You can attach a spirit level to get even pictures, a shotgun microphone for video, a light, etc, or some kind of onward converter to attach basically anything else that could sit on top of a phone to enhance photography/video. Why pass up on that opportunity, and close that door for yourself??) It's built into the design in a very slick way, too.

It's cheaper than the Joby GripTight Pro 2, which is my best recommendation, although that one is probably overkill for many people's needs.

What I don't love:

It's pretty heavy for its size. I suppose that comes with the territory with durable metal construction, but I actually think it makes it too heavy for the onward cold shoe to be much use on a "smartphone" tripod, selfie stick, etc. Anything with an adjustable height pole that may bend or sink under weight is going to struggle with this once it has a 150g phone in it and a light or a short stack of gizmos on top. I haven't weighed it precisely, but it's about as heavy as my phone. Perhaps I should have gone for a plastic mount - though I couldn't go past this design!

The grip pads are a bit rubbish. There's no cushioning for the phone, and they are totally flat; something curved, or something the edge of the phone would sink into just a little, would make the edge of the phone less likely to slip, and you wouldn't have to put as much pressure on the phone to get a slip-proof hold. Not super pleased about that, and will probably glue something onto the grip pads myself to address this, or at least cushion with a spot of blue tack (if that won't get stuck in my phone case).

It's also not angle-adjustable within itself (which the Joby one is), although I wouldn't try to mess with the simplicity of the design by adding that when customers can just mount it to a mini ball head (<$5 including delivery) if they want it to move around. (I personally wouldn't buy another mount over this one because of that feature, especially if there were other trade-offs.)

In short, this is a fantastic design, but it still needs a bit of work to be wholeheartedly recommended. A subsequent generation of this with a little reworking could blow every other phone mount on Amazon out of the water.

OA
5.0 out of 5 stars Pricey, but completely worthwhile.
Reviewed in Australia on 2 September 2019
Verified Purchase
Machined from solid metal, it has a nice weight and solid feel to it. Its a bit slow having to screw and unscrew each time you place your phone, but it holds well and is built to probably last forever as there are no springs to get loose over time, nothing to mechanically wear down or break, and in general no points of failure I can see.

There is however no allen key included so if it becomes loose over time, you may need your own allen key to tighten the screws back up, my unit was tensioned perfectly out of the box and felt smooth and tight enough to not have any wiggle.

It seems a bit pricey, but you really do get what you pay for. I was after something to use longterm, and this is definitely without a doubt it.
Read more
Helpful
Comment Report abuse

savage
5.0 out of 5 stars Solid and functional
Reviewed in Australia on 20 May 2019
Verified Purchase
This is a well made solid item. Everything works and it does as is described and I feel confident putting my A$1400 phone in it. The vendor sent it quickly. around happy purchase
Read more
Helpful
Comment Report abuse

QUANG H LE
5.0 out of 5 stars You can use it FOREVER
Reviewed in Australia on 10 June 2019
Verified Purchase
Everything was made of aluminium. Very strong and durable. A bit expensive, but you get what you pay for.
Read more
Helpful
Comment Report abuse

Orphendan
5.0 out of 5 stars very happy with this item
Reviewed in Australia on 25 September 2019
Verified Purchase
great product
Read more
Helpful
Comment Report abuse
See all reviews from Australia
Get FREE delivery with Amazon Prime
Prime members enjoy FREE Delivery and exclusive access to movies, TV shows, music, Kindle e-books, Twitch Prime, and more.
> Get Started
Back to top
Get to Know Us
Make Money with Us
Let Us Help You
And don't forget:
© 1996-2020, Amazon.com, Inc. or its affiliates