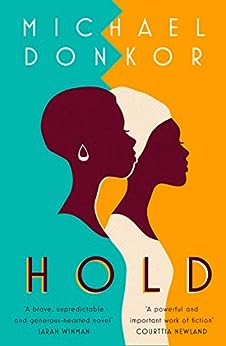 At times, there are flashes of Jane Eyre in Belinda’s role as a “governess” of sorts, but there is no Mr Rochester to save her from her life, nor a sugary ending. The focus is on the love that flows between women and the need for Belinda to find a place that feels like home … Their lives are hard, yet a profound sense of hope resonates from within Donkor’s warm and accomplished novel. Arifa Akbar, Observer

‘Donkor’s debut novel concerns itself with those who don’t traditionally get much of a look-in when it comes to fiction: two Ghanaian house girls… A warm and intelligent story, offering full-bodied characters and a fortifying examination of courage’ Mail on Sunday

‘Hold is refreshing in its tender focus: the interior life of Belinda, and the relationship she forges with Amma … Donkor’s empathetic rendering of Belinda’s interiority is perhaps the greatest strength of a novel that is impressive both in form and in scope. Though fictional, Hold affords domestic workers, especially immigrant women, a far more nuanced emotional landscape than a significant number of nonfiction narratives’ Atlantic

‘Michael Donkor is a real talent, and Hold is a brave, unpredictable and generous-hearted novel’ Sarah Winman, author of Tin Man

‘There’s much to love in Michael Donkor’s debut novel. But it’s the emotional truths he unearths from the inner lives of three disparate women that make the novel stand up and sing. Hold is a powerful and important work of fiction’ Courttia Newland, author of The Gospel According to Cane

‘A beautiful novel. A deeply engrossing, elegant tapestry of family and friendship from a stirring new voice’ Irenosen Okojie, author of Butterfly Fish

Michael Donkor was born in London, to Ghanaian parents, and teaches English Literature in West London. Many of the issues in this novel are close to his heart, and his writing won him a place on the Writers’ Centre Inspires Scheme in 2014, where he received a year’s mentoring from Daniel Hahn.

Female Reader
3.0 out of 5 stars nicely written and warm, but ultimately unconvincing
Reviewed in the United Kingdom on 19 October 2019
Verified Purchase
Belinda (and her friend Mary) is an endearing character, and we see life essentially through her eyes. The book is charming (young housemaid from the country in Ghana goes to work in nearby town, catches the eye of visiting Ghanaian couple from England who want a steadying influence for their teenage daughter, so arrange to take Belinda back to London). But I struggled with many of the implausibilities in the plot, particularly the final chapters. I don't want to detail them as that would be a spoiler.
Read more
Report abuse

K. O. Uzondu
1.0 out of 5 stars Difficult flow
Reviewed in the United Kingdom on 4 May 2019
Verified Purchase
It was very difficult to get into the flow of the book! I agree that is a warm light hearted story but the main character and the plot of the book isn’t compelling.

The plot offered no twist, excitement or surprises and none of the characters including the main character; ‘Belinda’, is captivating or imposing or well defined

mjk
3.0 out of 5 stars Okay book ... that's it.
Reviewed in the United Kingdom on 5 December 2020
Verified Purchase
I was expecting so much more from this story. I enjoyed the first half of the book but as the relationship between the girls grew, I thought the writer created an inauthentic direction for them. The writing was good, other story elements were fine. It could be more enjoyable for other readers but not for me.
Read more
Report abuse

M. Harrison
5.0 out of 5 stars Very good book
Reviewed in the United Kingdom on 25 January 2021
Verified Purchase
The language is in dialect which after a little makes sense. I have found that with novels based in another country it helps to read (or say) difficult phrases in an appropriate accent. I first discovered this trick reading a Northen Irish book.
Read more
Report abuse

Audrey Anderson
5.0 out of 5 stars Absolutely Fantastic Read
Reviewed in the United Kingdom on 15 August 2021
Verified Purchase
This is a must have in anyone's collection...beautifully written this author is definitely on my list of ones to watch out for. Look forward to reading more of his books.
Read more
Report abuse
See all reviews
Back to top
Get to Know Us
Make Money with Us
Let Us Help You
And don't forget:
© 1996-2021, Amazon.com, Inc. or its affiliates