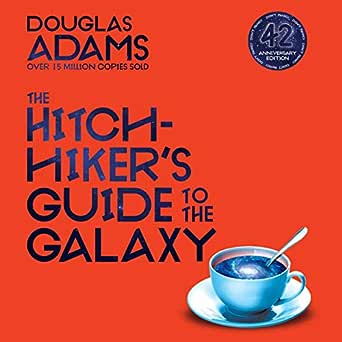 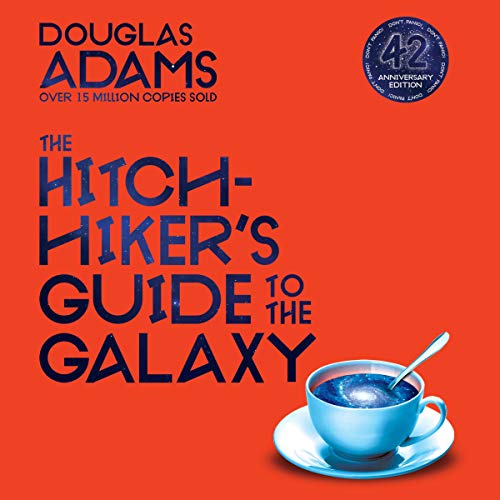 Hitchhiker's Guide to the Galaxy

Philip Nettleton
5.0 out of 5 stars So Good
Reviewed in Australia on 6 March 2020
Read by Stephen Fry, I believe. If you have read the book (or not) this is an absolutely amazing reproduction. Simply fabulous. I recommend this book as one of the must-reads of the 20th century. It is hilarious.
Read more
Helpful
Comment Report abuse
See all reviews from Australia

Saganite
5.0 out of 5 stars I'm just a big dope for Doug, and this is about hearing his voice
Reviewed in the United States on 22 May 2009
Verified Purchase
Why is this CD special? There is almost nothing on here, apart from a couple of introductory comments that Doug makes, that I don't already know very well...practically by heart. I think it is that I am still stung from Doug's death in 2001, shortly after we had exchanged emails about his splendid non-fiction book, "Last Chance to See." No author has made me laugh more, and so reliably written things I find moving, with some of his essays and speeches. And there was one detail of Doug's death that I found especially haunting: It's a running gag in the Hitchhiker's Guide books always to have a towel at hand for use in various emergencies, and Doug died at a gym clutching a towel.

My sentimental, even maudlin, introduction is only to set up the following: Listening to Dough Adams read his stories to an appreciative audience is an unalloyed treat. His goofy enthusiasm and commitment to the material, paired with material that can withstand that sort of goofy enthusiasm, is joyful. Pure and simple.

This is not a particularly great recording, though it is thoroughly competent. There's nothing much special about the readings, either, and in fact Doug stumbles and stammers through a line here or there. But the appreciation of the crowd comes through loud and clear, and Doug seems to be having a blast, and the experience conjures up a living experience that will have to stand in, as the man at the height of his creative powers is now silent.

Lest this sound like too much of a hagiography, some of the material falls rather flat. Some is merely silly and not at all clever, to the point of inducing groans. Doug's later stuff does not seem quite so desperate to jam an absurdity or non sequitur into every single line, and is improved by the matured restraint. But for sheer silly pleasure, even the juvenile stuff hits the mark more often than it probably should. Silliness--wise silliness--is a gift too much taken for granted, and this CD resurrects the voice of one of its finest practitioners.

Amazon Customer
5.0 out of 5 stars Absolutely Brilliant
Reviewed in the United States on 12 January 2008
Verified Purchase
I have been a fan of the guide for many years now, and its absolutely amazing (and hilarious) to hear it brought to life. Douglas's performance is just incredible to hear. This is a must have for any fan of the guide.
Read more
5 people found this helpful
Helpful
Sending feedback...
Thank you for your feedback.
Sorry, we failed to record your vote. Please try again
Report abuse

David Hoffman
5.0 out of 5 stars Great stuff
Reviewed in the United States on 27 June 2010
Verified Purchase
If you like any of Douglas Adams books, or you are a fan of the radio plays, then pick this up. It's an excellent treat and Douglas does a remarkable job reading selected passages from his books.
Read more
One person found this helpful
Helpful
Sending feedback...
Thank you for your feedback.
Sorry, we failed to record your vote. Please try again
Report abuse

bigdogk33
3.0 out of 5 stars love the content but bad editing
Reviewed in the United States on 22 April 2010
Verified Purchase
I have this on cassette tape and loved it. Bought it on cd because I don't have a cassette player in my car anymore. I was very dissapointed that when they put the chapter stops in for the cd they put a 2 second pause in for each stop. Douglas is reading the stories and all of a sudden it stops for 2 seconds because someone decided to put a chapter stop there. I don't think I've ever had a cd do that before. The content is great, but annoying to listen to.
Read more
4 people found this helpful
Helpful
Sending feedback...
Thank you for your feedback.
Sorry, we failed to record your vote. Please try again
Report abuse

daisyj
1.0 out of 5 stars Misleading title
Reviewed in the United States on 26 December 2010
Verified Purchase
I purchased this item as a Christmas gift for my son, who is a Douglas Adams fan. Unfortunately, the content is NOT "The Hitchhiker's Guide to the Galaxy." Douglas Adams is reading excerpts and cuts from the series, rather than the book itself. This distinction should be mentioned either on the cover or in the Amazon ad.
Read more
3 people found this helpful
Helpful
Sending feedback...
Thank you for your feedback.
Sorry, we failed to record your vote. Please try again
Report abuse