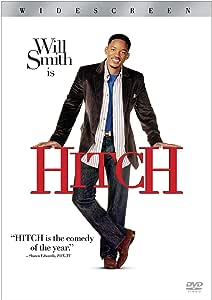 Meet Hitch (Will Smith), New York City's greatest matchmaker. Love is his job and he'll get you the girl of your dreams in just three easy dates, guaranteed! And that's exactly what happens when Albert Brennaman (TV's Kevin James, "The King of Queens") wins the heart of gorgeous society heiress Allegra Cole (supermodel Amber Valletta). So when tabloid columnist Sara Melas (Eva Mendes, Stuck On You, Once Upon a Time in Mexico) decides to uncover the secret behind the tubby schlub's success, she's shocked to discover that Alex Hitchens, the charming young man she's been seeing, is the legendary date doctor himself. Exposed in a front-page scoop, it's now up to Alex to try to save Albert and Allegra's relationship as well as his own. Which only goes to show that just when you think you've found true love, there's always a HITCH.

4.7 out of 5 stars
4.7 out of 5
866 global ratings
How are ratings calculated?
To calculate the overall star rating and percentage breakdown by star, we don’t use a simple average. Instead, our system considers things like how recent a review is and if the reviewer bought the item on Amazon. It also analyses reviews to verify trustworthiness.

Imran Akram
5.0 out of 5 stars Two Thumbs Up!
Reviewed in Australia on 31 July 2020
Verified Purchase
A couple of love stories put in perspective around existing facts and scenarios.
Read more
Helpful
Report abuse
See all reviews

JD Ch-le-St
4.0 out of 5 stars A GOOD FAMILY FILM
Reviewed in the United Kingdom on 18 February 2017
Verified Purchase
I enjoyed this 118 min REGION B/2 BLU-RAY film that was both entertaining and funny. Will Smith, Kevin James, Eva Mendes and Amber Valletta the main characters played their parts very well. There is nothing in the film, in my opinion that will offend.
Alex Hitchens (Will Smith) is a professional "date doctor" who gets romantically involved with a New York tabloid gossip columnist Sara (Eva Mendes). Whilst pursuing his own life he tries to "coach" Albert (Kevin James) a tax corporate accountant who is head-over-heels with Allegra (Amber Valletta) a glamorous socialite.
The question is will both romances continue and/or have a happy ending.
Read more
2 people found this helpful
Report abuse

woelalin
5.0 out of 5 stars lots of really good entertainment for not much money
Reviewed in the United Kingdom on 18 October 2011
Verified Purchase
I'll never grasp, why they usually sell DVD for nearly ten Euro and here you can buy two really good films for about half of that. I must admit, I was suspicious, but I watched both films and didn't find "a hook on the whole thing" (only for Germans). Ok, the cover is paper not plastic, but usually I don't put my movies in the bathroom, so they never get wet, and it doesn't matter.
"Sleepless in Seattle": To watch this film you can choose between german, english, french, italian and spanish and even more subtitles (dutch, portuguese, arabic, czech, danish). I have seen this film before, (of course), it's going to become a "Klassiker" (for women, I cannot imagine any man watching it - not much action in it, but lots of emotions.) There are so much wonderful moments, when she peels an apple, or is hiding in the cupboard listening him in the radio. It's a really good film about love, even if the both becoming lovers never kiss each other until the end of the film. Of course, in a very american way there are too many coincidences to be true, but it is a film after all, and no one should expect it to be like real life. I'm very fond of this film, especially when the weather is cold and you sit warm and cosy in your room.
Hitch: This film you have to watch in english, but you can choose subtitles also in dutch, arabic, bulgarian, croatian and greek. I must admit, it doesn't seem to make sense to sell two films together with such different languages, unless you want to inspire people to learn more foreign languages, what would be a fine intention for more understanding in the world or at least in Europe.
The film is worth watching too, I think even for a man, there are a lot of funny moments, and besides it shows, very authentic, what one must do to get love, how it is easy going if you are really interested in the other person, how the process of learning to know someone change yourself and about how you must have the courage to show yourself also.
Besides you can learn a lot of american way of life (years ago) and language, very funny indeed.
Read more
Report abuse

Mark Barry
2.0 out of 5 stars A Nice Film But A Poor Blu Ray
Reviewed in the United Kingdom on 7 May 2010
Verified Purchase
I have to agree with other reviewers on the quality of this BLU RAY reissue - it's not very good at all. For a modern film to look this washed out can only mean little or no effort was made in transferring it to the new format.

Some scenes are nice for sure, but better - absolutely not. Most of the indoor shots are slightly hazey - as if this was filmed on the hoof. And I think I even spotted scratches on the negative... A shame - because it's a rather lovely movie - and there's great chemistry between Will Smith and the gorgeous Eva Mendes.

If you're thinking of replacing your DVD version - I'd say test first if you can. Otherwise, unfortunately, this is one to avoid...
Read more
One person found this helpful
Report abuse

G.Brimson
5.0 out of 5 stars Happy Days
Reviewed in the United Kingdom on 23 February 2013
Verified Purchase
As most have mentioned in reviews you know exactly what you're getting with this film. It's lightweight without being too flimsy, its frothy without spilling over and it's funny without being hilarious. Great acting from the 2 leads, especially the gorgeous Eva Mendes who really should be starring in many more top class films as she is a great actress. Possibly seen as too beautiful to be taken that serious but she really is that good. My current nemesis Ryan Gosling is a very lucky man. Looking forward to the upcoming film The Place Beyond The Pines in which both star.
Read more
Report abuse

Diogenes
5.0 out of 5 stars One of the best romantic movies around!
Reviewed in the United Kingdom on 21 February 2020
Verified Purchase
All great characters, good plot, fab' New York takes, brilliant entertainment.
Read more
Report abuse
See all reviews
Back to top
Get to Know Us
Make Money with Us
Let Us Help You
And don't forget:
© 1996-2021, Amazon.com, Inc. or its affiliates