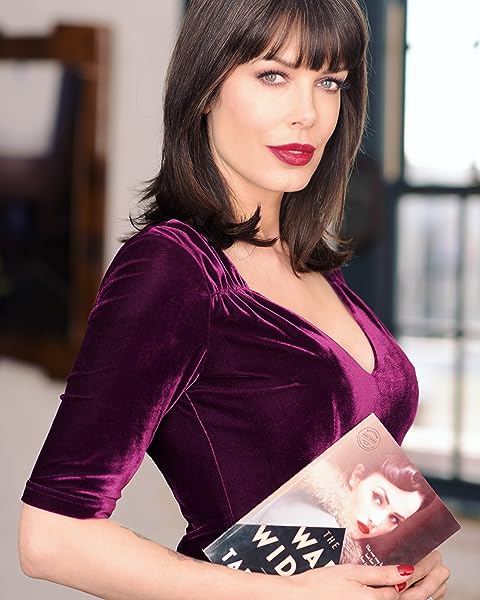 Page 1 of 1 Start overPage 1 of 1
Previous page
Next page
Start reading Hit (Makedde Vanderwall Book 4) on your Kindle in under a minute.

Tara Moss is the author of the bestselling crime novels Fetish, Split, Covet, Hit and Siren. Her novels have been published in seventeen countries* in eleven languages, and have earned critical acclaim around the world. Her non-fiction writing has appeared in The Australian Literary Review, Vogue, ELLE, The Australian Women's Weekly, SMH and The Australian, among other publications. She also finds time to write her own blog, The Book Post. Her next novel will be published in November this year. Moss hosts the true crime documentary series Tough Nuts - Australia's Hardest Criminals on the Crime & Investigation Network, and as 'Ambassador of Crime' for 13th STREET Universal Channel, Moss hosts Tara Moss in Conversation where she interviews her fellow bestselling crime authors from around the world, giving an intimate look at what makes successful thriller writers tick. She also recommends crime novels at her online book club Tara Moss Recommends, on the 13th STREET Universal website. She previously hosted the international crime documentary series Tara Moss Investigates on the National Geographic Channel. Writing has been a lifelong passion for Moss, who began penning gruesome "Stephen King-inspired" stories for her classmates at 10. She went on to an international career as a fashion model before pursuing professional writing, first earning a Diploma from the Australian College of Journalism in 1997, and in 1998 winning the Scarlet Stiletto Young Writers Award for her story, Psycho Magnet. Moss wrote her debut novel, Fetish, when she was 23. Her novels have been nominated for both the Davitt and the Ned Kelly crime writing awards, hit #1 on numerous bestseller lists, and made her Australia's #1 selling crime writer several years running. Her in-depth research has seen her earn her private investigator credentials (Cert III) from the Australian Security Academy, tour the FBI Academy at Quantico, spend time in squad cars, morgues, prisons, the Hare Psychopathy Lab, the Supreme Court and criminology conferences, take polygraph tests, shoot weapons, conduct surveillance, pass the Firearms Training Simulator (FATSII) with the LAPD, pull 4.2 G's doing loops over the Sydney Opera House flying with the RAAF, and acquire her CAMS race driver licence. Stopping at nothing to research and 'experience' scenes for her latest novel Siren, Moss was set on fire by Hollywood stunt company West EFX, and choked unconscious by Ultimate Fighter 'Big' John McCarthy. She has conducted hundreds of talks at literary festivals, schools and universities, discussing her research experiences and writing career. Born in Victoria, BC, Moss is a dual Australian/Canadian citizen, and is the first writer to have a star on the Australian Walk of Fame. She divides her time between Sydney, Los Angeles and her hometown in Canada. When not researching and writing her next novel, Moss enjoys riding her 900cc Triumph Scrambler motorcycle, spending time with her pet python, Thing, and serving as a UNICEF Goodwill Ambassador (since 2007) and ambassador for the Royal Institute for Deaf and Blind Children (since 2000). She is married to Australian poet and philosopher Dr. Berndt Sellheim. (*Moss's novels have so far been published in the USA, Canada, UK, Italy, Spain, Portugal, Germany, France, Russia, Romania, Hungary, Czech Republic, Croatia, Japan, Brazil, Australia, and New Zealand.)

anessa adolphe
5.0 out of 5 stars Tara Moss is wonderful.
Reviewed in Australia on 17 August 2014
Verified Purchase
I love Tara Moss's work. She keeps you guessing all the time. She's very talented and beautiful to go with it but like us all, nothing comes without heartache. Reading her story on her life thus far there have been times when being a striking beauty has given her more problems than I think would be worth it for most but she has shown her inner strength in real life as well as through her non fiction writing. I recommend male or female read her stories because you feel like you can feel the fear etc that her characters are encounting because of her written word is so believable & descriptive. Go ahead & start you won't regret it.
Read more
Helpful
Report abuse

Chris Connors
4.0 out of 5 stars Like the way she writes
Reviewed in Australia on 10 January 2015
Verified Purchase
Like the way she writes. Wow! What a heroine - not sure I could listen to too many of her exploits but would read another about her.
Read more
One person found this helpful
Helpful
Report abuse
See all reviews

Amy Hauch
5.0 out of 5 stars Loved the whole set
Reviewed in the United States on 14 December 2018
Verified Purchase
I read all four of the books involving Mak in a row and couldnt put them down! Excellent read and I hope to read more of her adventures.
Read more
Report abuse

Karen Pratt
4.0 out of 5 stars Mak Vanderwall
Reviewed in the United States on 28 July 2013
Verified Purchase
She sure gets into a lot aof trouble for a model. I like the book but sometimes get a frustrated when you can predcit whaty is going to happen next.
Read more
Report abuse

Cass
5.0 out of 5 stars Loved the series
Reviewed in the United States on 1 June 2013
Verified Purchase
This series was extremely enjoyable and I was sad to read the last installment (because it meant no more to read). If u like a tough, but beautiful female heroin who leads an exciting life as a PI you'll enjoy this book. It has a bit of romance and lots of action...
Read more
Report abuse

Valarie Thomas
5.0 out of 5 stars Great read
Reviewed in the United States on 9 April 2014
Verified Purchase
Really got me in was hard to put down, although i only read in bed at night and don't get through many pages at a time.
Read more
Report abuse
See all reviews
Get FREE delivery with Amazon Prime
Prime members enjoy FREE Delivery and exclusive access to movies, TV shows, music, Kindle e-books, Twitch Prime, and more.
> Get Started
Back to top
Get to Know Us
Make Money with Us
Let Us Help You
And don't forget:
© 1996-2020, Amazon.com, Inc. or its affiliates