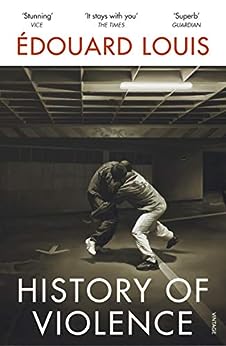 An intense and uncomfortably thrilling book, which uses the harrowing events of that Christmas Eve as a basis for a wider exploration of class, race and individualism... a novel that is unflinching in its examination of class and discrimination. -- Tash Aw * Times Literary Supplement * [A] heartbreaking novel... I find myself captivated by Edouard Louis's books and his raw honesty. -- John Boyne * Irish Times * [A] harrowing piece of autofiction... History of Violence is a slim but densely layered novel that begins with raw urgency. -- Johanna Thomas-Corr * The Times * [B]oth brave and ambitious in its determination never to let its reader, or its author, escape lightly the damaging realities it describes. -- Tim Adams * Observer * Louis's greatest strength as a writer is that he feels things so passionately, sometimes to the point of obsession, but that he also has a philosophical turn of mind that explores, rather than neutralises, his feelings. -- Edmund White * Guardian * --This text refers to an alternate kindle_edition edition.

Born Eddy Bellegueule in Hallencourt, France, in 1992, Édouard Louis is a novelist and the editor of a scholarly work on the social scientist Pierre Bourdieu. He is the coauthor, with the philosopher Geoffroy de Lagasnerie, of "Manifesto for an Intellectual and Political Counteroffensive," published in English by the Los Angeles Review of Books. --This text refers to an alternate kindle_edition edition.

The radical, urgent new novel from the author of The End of Eddy - a personal and powerful story of violence --This text refers to an alternate kindle_edition edition.
Read more

4.5 out of 5 stars
4.5 out of 5
94 global ratings
How are ratings calculated?
To calculate the overall star rating and percentage breakdown by star, we don’t use a simple average. Instead, our system considers things like how recent a review is and if the reviewer bought the item on Amazon. It also analyses reviews to verify trustworthiness.

S. J. Bradley
3.0 out of 5 stars More of a novella than a full novel.
Reviewed in the United Kingdom on 24 August 2018
Verified Purchase
Interesting. Feels sufficiently real that it seems cycnical not to rate it higher, but not very deep.
Read more
2 people found this helpful
Report abuse

Eclectic Reader
5.0 out of 5 stars “Naïveté Is a Necessary Condition of Escape”
Reviewed in the United States on 9 July 2018
Verified Purchase
History of Violence (2016; translated by Lorin Stein in 2018) is French author Édouard Louis’s sequel to his stunning debut novel, The End of Eddy (2014) written when he was nineteen years old. As with his first work, History of Violence is an autobiographical novel in which Louis experiments and does some sensational writing with point of view and narrative style.

In The End of Eddy Louis tells of growing up poor and gay in rural France and eventually having to leave his birthplace for Paris in search of greater acceptance and a happier life. Unfortunately, History of Violence focuses upon a brutal attack: a rape and attempted murder by a man Édouard hesitantly picks up on the streets and takes home with him which has him reluctantly returning home after two years to allow his sister, Clara, to care for him and for him to slowly regain his self-confidence.

Sadly, the subject matter of History of Violence couldn’t be better timed given the “Me Too” movement in the United States emphasizing the need for change regarding the treatment of women and believing them when they come forward with legitimate accusations of harassment rather than victimizing them further. The fact that History of Violence involves a sexual and physical attack on a man by another man may be eye-opening for some readers, but as in the case of women, it isn’t something new—just, perhaps, notably less frequent or uncommonly spoken about.

Louis’s story covers in minute detail the pick-up, his rationale for taking a stranger home, the attack, the possible motivation for the attack by the man Édouard knows only as Reda, and the reaction by police officials, medical providers, friends, and family. Much of what Louis experiences after the attack is distressing. Foremost, the author focuses upon his reaction to events and the turmoil and consequences they have upon him. There are also flashbacks to Édouard’s youth and family since piecing together some of his thoughts and reactions to the Paris attack are rooted in his upbringing and less than happy early homelife. It is an experience and story no one would ever wish to have happen to them or anyone about whom they care.

What makes History of Violence especially intriguing is the way the story is told. At times Édouard is the narrator—telling his chronical with vivid detail yet at times with an understandable amount of confusion as he tries to make sense of what has taken place—second guessing his actions, thoughts, observations, and recollections. At other times, Édouard’s sister is the narrator—explaining to her husband what has happened to Édouard and why he is going to be staying with them. Captivatingly, at times Édouard, in parentheses and italics, interrupts his sister’s narration (which he is over hearing), making clear to the reader that what his sister is saying is inaccurate. Parts of Édouard’s own account also contains things never confided to his sister—or anyone except the reader. With the chronicle switching between two narrators and facts known only by Édouard, one might expect the sequence of events is difficult to follow, but it is not. Louis carries off the multiple perspectives flawlessly.

Because of the narrative style and Édouard’s hesitant manner to reveal all at once, the story of the actual attack upon Édouard comes slowly, but there is never a moment when the story lags and the author creates a tremendous amount of empathy for him/his protagonist. The bond between Édouard and the reader is quickly and firmly created and maintained. The author does not seek sympathy and is amazingly objective and even self-effacing at times (his sister, unaware that Édouard is listening, is also less than flattering and kind about her brother on occasion).

Along with violence and the multitude of issues surrounding homophobia and a less than straight-appearing, intellectual man, Louis’ novel also attacks racism since the perpetrator is a Kabylian (“a Berber ethnic group indigenous to Kabylia in the north of Algeria”—Wikipedia), but generally just referred to as an “Arab” by others in the book except for Édouard. Even Édouard, however, is forced to do some self-examining regarding his feelings toward people of color after the attack.

It is quite revealing that at one point Édouard questions “how to remember the past without repeating it.” He also remarks, “…all I have left is language, I’ve lost the fear, I can say ‘I was afraid’ but the word can only be a failure, a hopeless attempt to retrieve the feeling, the truth of the fear.” Readers may rest assured the author has perfected his language and story-telling to a point where History of Violence speaks meaningfully and poignantly. [NOTE: Louis’s third autobiographical novel, Who Killed My Father, is slated to be released in English in March 2019.]
Read more
12 people found this helpful
Report abuse

DAE
4.0 out of 5 stars Rape
Reviewed in the United States on 4 June 2020
Verified Purchase
Rape leaves destruction and an altered state for the victim. He is not the same person. This is made clear. The presentation of it is shown through the repetitive thoughts. Which are repeated and repeated. The reader is trapped as tightly as the victim. Disagreements arouse when, for one, he found sunshine made him angry. I immediately found myself saying, stop. Let the rays of sunshine warm you. Accept a moment of pleasure. But, I've never been violated by a man I don't know, but brought into my home. Which i did do. I look forward to the next book. Learning what path he takes in the coming days
Read more
One person found this helpful
Report abuse

Brian Coppedge
5.0 out of 5 stars Brutal subject, excellent writing
Reviewed in the United States on 18 February 2019
Verified Purchase
I am not even sure how I came across this book, I had it on my kindle a while before I got around to reading it. The subject matter is challenging but the author has done a wonderful job of not making it so graphic that you cannot read those passages.
The book has a unique approach around narration, with the main character’s story being presented by his sister repeating what he had told her ( the character also interjects to the reader when the sisters version strays from the truth ), while the main character also tells part of the story in first person narrative.
I found this to be a quite amazing approach to a very awful incident- I highly recommend taking the chance on this book.
Read more
One person found this helpful
Report abuse
See all reviews
Back to top
Get to Know Us
Make Money with Us
Let Us Help You
And don't forget:
© 1996-2021, Amazon.com, Inc. or its affiliates