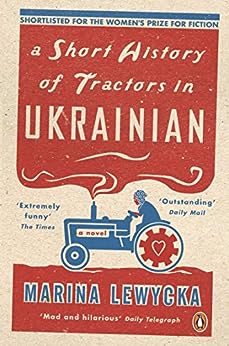 It's rare to find a first novel that gets so much right . . . Lewycka is a seriously talented comic writer ― Time Out

More than just a jolly romp with political undertones is the way it captures the peculiar flavour of Eastern European immigrant life . . . a very rich mixture indeed, as well as very enjoyable reading ― Daily Express

An extraordinary read . . . nothing short of amazing. A rare treat, all too easy to gulp down in one greedy sitting ― Spectator

A clever, touching story ― Economist --This text refers to an alternate kindle_edition edition.

In 2008 Tanika was awarded an MBE for Services to Drama and in 2016 was made a Fellow of the Royal Society of Literature. Tanika has an honorary doctorate in the Arts from Chichester University and is an Honorary Fellow at Rose Bruford College and Central School of Speech and Drama. She won the James Tait Black award in 2018 for her play Lions and Tigers.

A wonderful re-telling of a dark family comedy, adapted for the stage from Marina Lewycka's bestselling novel. It explores the hopes and hardships of immigrants, and how the past can shape a family.

'Two years after my mother died, my father fell in love with a glamorous blonde Ukrainian divorcée. He was eighty-four and she was thirty-six . . .'

Voluptuous gold-digger Valentina loves green satin underwear, boil-in-the-bag cooking and, she insists, the émigré father of sisters Vera and Nadezhda. Putting aside a lifetime's feuding, the sisters will do anything to protect their father. Unfortunately for them, he doesn't want to be saved. Worse, the sisters' battle to keep their father from Valentina's clutches unearths troubling family secrets that reach back fifty years into Europe's dark history . . .

4.1 out of 5 stars
4.1 out of 5
679 global ratings
How are ratings calculated?
To calculate the overall star rating and percentage breakdown by star, we don’t use a simple average. Instead, our system considers things like how recent a review is and if the reviewer bought the item on Amazon. It also analyses reviews to verify trustworthiness.

Cap
4.0 out of 5 stars Lovely family exploration
Reviewed in Australia on 7 March 2020
Verified Purchase
This a an amusing and gentle story of a family dynamic and how it plays out as the father ages - somewhat disgracefully.
Sensitively told without extreme malice, but also without being unrealistic about the struggles the family goes through.
Enjoyable read

Jackie Cowling
5.0 out of 5 stars light in dark corners
Reviewed in Australia on 20 May 2014
Verified Purchase
Really enjoyed the novel. Very clever really, in its light and highly readable treatment of so many subjects, from the frailty and vulnerability of elderly parents and the generational chasm, to the economics and consequences of communism and immigration of questionable legality. Yes a seemingly crazy juxtaposition of themes blend smoothly into an entertaining tale, involving love and loyalty, resilience, disappointment, sibling rivalry, self image, status anxiety, national identify and the horrors of war. It reminds us that what comes before moulds us into who we are today, and what some will do (or settle for) to get what they want. It is evil or desperation? Selfishness or maternal ambition?

It is such a quick easy read but despite dark corners of subject matter remains light and was considered a comic novel I believe. I wouldn't go that far but it was highly entertaining and very evocative.

Gillrock
4.0 out of 5 stars Funny, sad and quite lovely
Reviewed in Australia on 9 November 2014
Verified Purchase
An important and totally honest perspective on dealing with ageing as well as an important insight into the horrors of war from a Ukrainian perspective
Read more
Helpful
Report abuse

John T C
5.0 out of 5 stars A worthwhile story
Reviewed in Australia on 17 June 2016
Just from reading the opening chapter, I got captivated like never before. Reading it further captivated me even more and the end of the book proved that it is an amazing story. A story in a story, A Short History of Tractors in Ukrainian captured the depth of characterization that produced an amazing octogenarian in love with a woman in her prime, a born survivor who is determined to make use of any advantage to secure a better future for her son; and the pragmatism of two conflicting sisters who are determined to 'rescue' their father. Enlightening, hilarious, gracious, gave and tender in turns, this fascinating story gives us an insightful view of the lives of those trying to make a new life as refugees or exiles.

I would recommend this book to any lover of good literary works. There are many lessons to learn from this book. Explored in a similar manner in The Lincoln Lawyer , Disciples of Fortune, it is a fascinating angle. I enjoyed reading this book, so if you are undecided, my advice is that you should pick it up and do some reading that you will remember afterwards as a worthwhile story.
Read more
One person found this helpful
Helpful
Report abuse
See all reviews

Peter - The Reading Desk
4.0 out of 5 stars An entertaining read
Reviewed in the United Kingdom on 11 December 2018
Verified Purchase
This book is an entertaining read attempting a number of different messages and to a large extent pulling them off. Firstly an 84-year-old man has married a young attractive Ukranian blonde and it's not that he seems fooled in love either but this causes major concerns for his daughters. They have previously been at odds with each other but now agree to a pact to remove the immigration seeking chancer.

The story adds further depth looking back at the younger life of the old man and his involvement with tractors and his escape from Ukraine. I'm not a tractor enthusiast but the reference to Harry Ferguson had me smiling as he was born not far from where I live.

There are moments of humour, that is quite enjoyable, there are moments of intrigue which are interesting and there is often a tragic context about the story. I ultimately found it hard to warm to any of the characters but strangely felt like I wanted to keep reading. A good read that I wouldn't get over excited about. 3.5 stars not sure whether to go up or down.
Read more
6 people found this helpful
Report abuse

Amanda GRIFFITHS-JONES
4.0 out of 5 stars Fun & Quirky
Reviewed in the United Kingdom on 2 August 2020
Verified Purchase
Told from the viewpoint of Nadia, youngest daughter & family backbone, this is a fun & quirky read that tackles the dilemma of any elderly father and his new wife. Enter Valentina, the larger than life Ukrainian looking for a rich husband with property & the means to support her, but instead she is faced with the reality of a senile old man who is obsessed with tractors & can barely stretch to more than a second-hand Lada. There are ups and downs, companionship & divorce, all told in a light-hearted & matter-of-fact prose that’s makes this a great weekend read.
Read more
One person found this helpful
Report abuse

Bloody Mary
4.0 out of 5 stars This book gives you plenty to think about.
Reviewed in the United Kingdom on 27 February 2021
Verified Purchase
Bought this for our newly established book club. A strange and intriguing title. Thought it an interesting approach to a story which is like a biography. Very good characterisation but I didn't find it humerous. I felt so sympathetic to the storyline, particularly to the elderly father ( I am 92 myself) and the younger daughter. Well written with great balance between the story and the excerpts from the history of tractors in the Ukraine.
Read more
Report abuse

Amazon Customer
1.0 out of 5 stars Lacks depth and description
Reviewed in the United Kingdom on 13 May 2020
Verified Purchase
Just finished reading this book, really struggled to keep going with it. The characters are not relatable, the plot is fairly predictable and the style of writing did not engage me at all. I am not usuallyh negativr but I would definitely not recommend.
Read more
3 people found this helpful
Report abuse

Lisa Lawless
5.0 out of 5 stars Unexpectedly Brilliant!
Reviewed in the United Kingdom on 31 August 2020
Verified Purchase
I read this as a bookclub choice and was pleasantly surprised from the outset. Well written and perfectly paced, the story drew me in and moved through cultural and family experiences, some of which I recognised and some I did not, but which I felt I became a part of nonethless, both rooting for the sisters and their father at various times, and suprisingly also for the "evil stepmother" at times.

The characters were entertainingly funny, endearing, hateful, beautiful and soul wrenching throughout evoking family life and personalities - although thankfully not generally at the extremes portrayed here.

A beautiful piece of work that I would recommend to anyone.
Read more
Report abuse
See all reviews
Back to top
Get to Know Us
Make Money with Us
Let Us Help You
And don't forget:
© 1996-2021, Amazon.com, Inc. or its affiliates