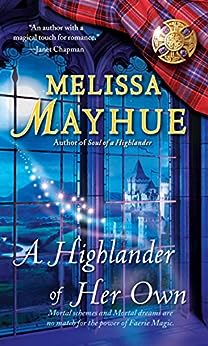 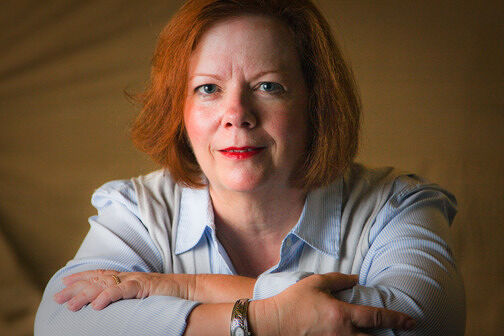 "Mayhue succeeds in entertaining her audience."

Mayhue succeeds in entertaining her audience.-- "RT Book Reviews" --This text refers to the audioCD edition.

Melissa Mayhue is the author of the Warrior series and the Daughters of the Glen series. A RITA finalist, she is the recipient of several awards, including a Holt Medallion. She lives in Colorado with her family.

MELISSA MAYHUE began her writing career in 2005 after a vacation to Scotland and a hike on the Black Isle inspired her with the perfect setting for the characters running around in her head. Her resulting debut novel, THIRTY NIGHTS WITH A HIGHLAND HUSBAND, won the Holt Medallion and Book Buyers Best awards in 2008 and made the finals of the Colorado Book Awards.

Since then, her imaginary world of Faeries and Mortals has continued to grow. A HIGHLANDER’S HOMECOMING, sixth book in her award-winning Daughters of the Glen series from Pocket Books, was a 2011 RITA finalist in the Paranormal Category. The first in her new Chance Colorado contemporary series - TAKE A CHANCE - released in November 2013 and the first in her new Magic of Time series, ALL THE TIME YOU NEED, released in November, 2014, now joined by the second in this series, ANYWHERE IN TIME.

Married and the mother of three sons, Melissa lives in beautiful Northern Colorado with her family and one very spoiled Boston Terrier.

You can visit her on the web at: www.MelissaMayhue.com

barrypound
5.0 out of 5 stars Five Stars
Reviewed in the United Kingdom on 12 August 2015
Verified Purchase
mum like the book tank you she sand 4.5 out 5 thank you
Read more
Report abuse

D. Merrimon Crawford
5.0 out of 5 stars Wonderful Medieval Scottish Time Travel!
Reviewed in the United States on 27 January 2009
Verified Purchase
In present day Prairieland, Texas, Ellie Denton's life has become more than complicated. Ray Stanton, her mother's ex-husband, is back in town trying to steal the family ranch out from under her. Ellie's gift with animals takes on an unusual twist when the animals start talking back to her. If that alone wasn't enough to upend her world, a simple wish for true love and an escape turns all too real when faerie magic transports her back to 14th century Scotland. Caden MacAlister has the weight of the world on his shoulders. Responsible for his family as well as the welfare of the land, Caden does not need a woman complicating his life, especially not one sent by the Fae! He has already experienced the kind of complications this kind of magic brings. Convinced she must be sent for one of his brothers, he now must protect her while trying to rescue a brother held for ransom. Ellie Denton, however, might just be exactly the kind of complication he needs if only he can learn to trust her and open his heart.

A HIGHLANDER OF HER OWN is a lot of light-hearted fun. A HIGHLANDER OF HER OWN has a contemporary tone set by the delightful modern personality of the heroine now faced with a strange medieval setting. Told mostly through the heroine's point of view, A HIGHLANDER OF HER OWN is a wonderful mix of humor, fantasy and emotion. In addition, Melissa Mayhue creates a rich depth of character in her portrayal of Caden, allowing the reader to see the inner conflicts of the medieval hero though his point of view. She peers into his heart. Melissa Mayhue does an excellent job of bridging the two different time periods, not only in the description of the time travel itself but also in the hero and heroine's interactions and in showing those things that men and women of all ages have in common. The Texas backdrop and some comments the heroine makes about cowboys as she is faced with a different world (the medieval one) before her are priceless. Medieval enthusiasts in particular will appreciate Melissa Mayhue's portrayal of the hero and the contrast between the hero and heroine. Although Melissa Mayhue brings together a modern woman and a medieval hero, she does not use one as a foil for the other but rather treats each with a vision that sees into the character of both. In many ways, the medieval world view allows Ellie a certain freedom and opportunity to grow as an individual through love and also within herself as an individual. Ellie's ability to talk to dogs and animals adds humor while also creating a soft spot for her sense of compassion and boldness. Melissa Mayhue never uses the heroine's unusual connection to animals or the faerie magic as a mere plot devise or shortcut to make things just happen or make the hero and heroine do things without developing as characters. Instead, she fully integrates both aspects within the very fabric of her tale.

As Ellie and Caden are drawn together through a dangerous suspenseful subplot, the light tone of the romance changes in one brutal scene towards the end. In view of this, readers only wanting only light moments in a romance should be forewarned. Nevertheless, this moment is where Melissa Mayhue truly shows her skill. Here, everything so carefully built up beforehand comes together emotionally and in terms of plot and characterization. In my opinion, removing this scene would be detrimental to the depth of the romance. The ending is superb! The resolution adds several new twists. When faerie magic, love and determination combine, all things are possible!

Although fourth in the Daughters of the Glen series, A HIGHLANDER OF HER OWN works as a stand-alone romance. Melissa Mayhue gives just enough inkling to let the reader know the history behind the other romances in the series, but not so much that this book gets bogged down with past books. A HIGHLANDER OF HER OWN leaves new readers feeling satisfied rather than as an outsider trying to catch up with a series. Nevertheless, I certainly have a keen interest in discovering more about the hero's past after having met him in this book. Here in the fourth book, Melissa Mayhue handles the series aspect exquisitely with a fine balance between revitalizing the series itself with a new tale for lovers of series while also creating a romance that feels complete in and of itself for new readers --- but with just enough intrigue to make the past of the fictional world intrigue.

Melissa Mayhue's A HIGHLANDER OF HER OWN is a wonderful medieval time travel romance! A HIGHLANDER OF HER OWN is a romance that will appeal to a wide range of readers with its historical setting, contemporary heroine and magical atmosphere. Medieval enthusiasts will find a special delight in Melissa Mayhue's medieval world. For medieval lovers, the humor is even richer as Melissa Mayhue captures so perfectly the complications and delights of both the modern woman and the fascination with the medieval world.

Sharon Alexander
4.0 out of 5 stars It entertained me
Reviewed in the United States on 26 November 2013
Verified Purchase
I typically love this series, but in this one, Caden is a just a bit too "thick" for my approval. He is drawn to Ellie, can't bear the thought of one of his brothers having her as wife, yet refuses to admit to himself that she is meant for him. To be so smart, he sure is stupid. Anyway, Ellie is a fun character and I enjoyed her interaction with the animals. I did not buy into her problems back in Prairieland, TX. Any court in Texas would have ruled in her favor regarding ownership of her mother's ranch. Her mother's X didn't even have power or money to get what he wanted, just a few weak relatives who would be easily overcome in the real world. Ellie is falling apart and running for her life, and her desire for her true love to come and fix everything for her...just didn't come off as believable! I liked the way the author brought "justice" at the end of the story, but in truth, it all felt kind of hokey! All-in-all, the comedy is fun and I still like her characters.
Read more
Report abuse
See all reviews
Back to top
Get to Know Us
Make Money with Us
Let Us Help You
And don't forget:
© 1996-2021, Amazon.com, Inc. or its affiliates