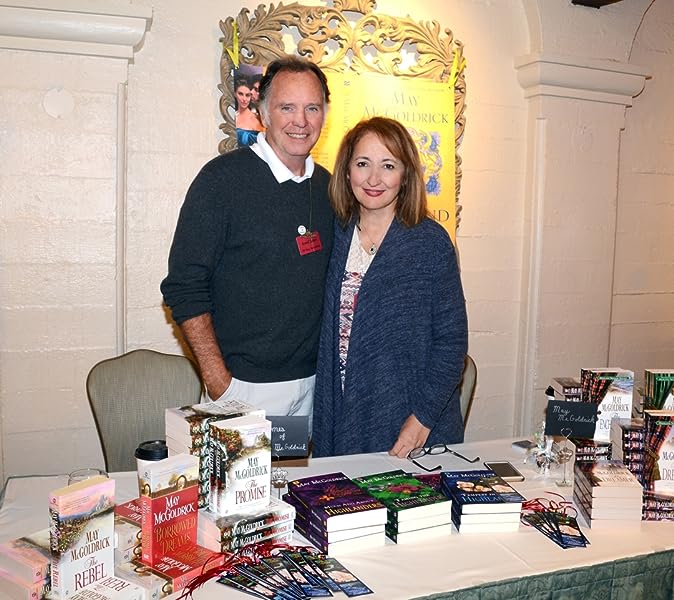 Page 1 of 1 Start overPage 1 of 1
Previous page
Next page
Start reading Highland Jewel: A Royal Highlander Novel on your Kindle in under a minute.

Complicated and enthralling...Highland Jewel has characters who engage the readers' hopes and dreams for a well-deserved, if sometimes rocky, journey to happy-ever-after. - Romance Junkies Readers will enjoy Highland Jewel and its intrigue and romance ... Beautifully written, as usual, the McGoldricks are masters of history and romance. - Romance Reviews Today

Authors Nikoo and Jim McGoldrick (writing as May McGoldrick) weave emotionally satisfying tales of love and danger. Publishing under the names of May McGoldrick and Jan Coffey, these authors have written more than thirty novels and works of nonfiction for Penguin Random House, Mira, HarperCollins, Entangled, and Heinemann. Nikoo, an engineer, also conducts frequent workshops on writing and publishing and serves as a Resident Author. Jim holds a Ph.D. in Medieval and Renaissance literature and teaches English in northwestern Connecticut. They are the authors of Much ado about Highlanders, Taming the Highlander, and Tempest in the Highlands with SMP Swerve.

Brutally Honest Reviews
TOP 100 REVIEWER
5.0 out of 5 stars History lessons blended with a wonderful romance
Reviewed in Australia on 24 September 2019
Though this book is about a different couple to that featured in the first in this series, Highland Crown, you’re going to miss a lot of the underlying context here if you haven’t read Highland Crown. At the end of that book we discovered Cinead’s royal lineage, and the fallout from that discovery. It’s obvious Cinead and Isabella’s marriage will have repercussions for everyone close to them, and in this book we see the effect it has on Maisie, Isabella’s younger sister.

Highland Jewel actually opens before Highland Crown takes place, setting the scene in Edinburgh as we discover Maisie wasn’t the quiet, biddable girl everyone thought. She was heavily involved in the Female Reform Society, a group considered seditious by England’s government, and with her friend Fiona, getting into all sorts of dangerous situations. Fiona’s brother Niall, a former army officer who retired when he couldn’t stomach the violence against his own people he was tasked with, is Maisie’s hero, and put in a terrible situation when his sister is held hostage to force Niall to commit an unspeakable act.

I still can’t quite see, given the historical context of the time, how Cinead and Isabella can get any sort of satisfyingly happy ending considering the impressive forces arrayed against them (and the fact that I know very well he didn’t get to be King of Scotland :P) but I can’t wait to read the third book in the series, Highland Sword, to find out how May McGoldrick manage to wrap this all up. I have every confidence they’ll manage it in some satisfying but unexpected way, though, because honestly this pair of authors are some of the best you’re going to find writing historical romance today. Weaving real historical events with fiction with such a deft touch the lines blur into insignificance, there are history lessons blended with a wonderful romance in every story.

Five stars for yet another fabulous read from May McGoldrick!

Disclaimer: I received a review copy of this book via NetGalley.

M. Nguyen
5.0 out of 5 stars Beautifully written with captivating plots and rich history 👍
Reviewed in the United States on 2 April 2020
Verified Purchase
“To see her is to love her, and love but her forever; for Nature made her what she is, and never made another.”

Highland Jewel is the 2nd book in the Royal Highlander Series. This story is about Maisie Murray, a female activist for women’s and civil rights, and Niall Campbell, a former Lieutenant in the Royal Highlanders regiment. I love this book ❤️, perhaps more than book 1, but I’d suggest you start there to get to know all the characters and historical settings. It also provides a nice complementary view in Maisie’s voice for many events happening in book 1. And I feel more romance element is depicted in this book 🥰 (a best friend’s brother trope 😆!)

Maisie is such an intriguing character. She led a double life: a shy dull girl to her family, and a fierce compassionate activist to the world. Co-founding Female Reform Society, Edinburgh chapter, with Niall’s sister, she used her written words to fight against unjust treatments to the Scottish people, and for the voice of women in society. She had this quiet strength that surprised many people, even her own family. Her spirits and convictions were what attracted Niall the most, on top of her stunning beauty 😆.

Niall was an honorable, tough, and intimidating man, but he was all “custardy” inside, a feminist at heart, who would roll on the floor to role play with his nieces, write to them poems and stories about strong heroines 🥰... He saw Maisie for who she really was, admired her passion and intelligence, at the same time, he was concerned for her and his sister’s safety. He was hoping to build a future with her, away from danger and violent protests, but then his plan was upended overnight when he was thrown into a nasty game of politics...

I love the strong bonds developed among the three women. Unlike Isabella, who progressed into an activist during the course of book 1, Maisie had always been one from the beginning, her fighting spirit was not dampened by any forces, one way or another she continued to fight the battle. I’ve enjoyed learning more about the political unrest during this period, from a point of view of an activist, how people had fought, violently suppressed or killed. The book is beautifully written and insightful, it’s sweet, emotional, yet captivating and thrilling that will keep you reading till the end ❤️!

Definitely a 5⭐️ read for me!
Read more
Report abuse

KRM
4.0 out of 5 stars The Saga Continues
Reviewed in the United States on 19 September 2020
Verified Purchase
Great historical fiction centered @the Scottish uprising of 1820. The story continues with Cinead, Son of Scotland and Isabella as secondary characters. The main characters Maise and Niall fall in love but he is forced to spy on and kill Maises new bother in law. Niall was a strong character he works to save his sister and his love. I enjoyed book 1 better as this seemed to move slower.
Read more
One person found this helpful
Report abuse

Lauren C. Wilson
5.0 out of 5 stars Fun strong fast-paced read
Reviewed in the United States on 23 January 2020
Verified Purchase
This historical fiction novel is fun and an easy read. Instead of a damsel in distress, it’s a fast-paced romance novel with plenty of action that allows the female characters be just as heroic as the male character!
Read more
One person found this helpful
Report abuse

Marcia J
4.0 out of 5 stars Great historical romance!
Reviewed in the United States on 12 March 2020
Verified Purchase
This is the second in the Highland series and is a wonderful read. I recommend anything from this author!
Read more
One person found this helpful
Report abuse

penelope hiigel
5.0 out of 5 stars great book
Reviewed in the United States on 30 September 2020
Verified Purchase
great story
Read more
One person found this helpful
Report abuse
See all reviews
Back to top
Get to Know Us
Make Money with Us
Let Us Help You
And don't forget:
© 1996-2021, Amazon.com, Inc. or its affiliates