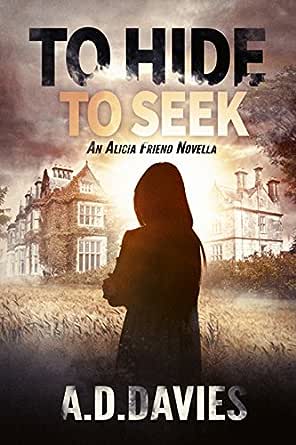 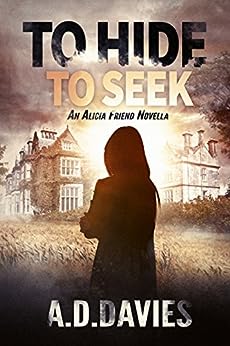 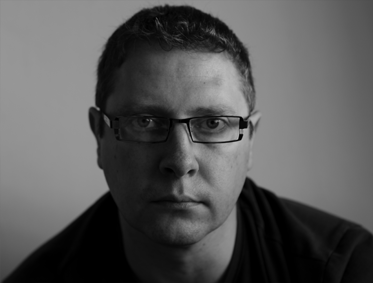 Freshly promoted to detective inspector, Alicia Friend is yet to unleash her quirky (sometimes irritating) personality on a murder case. That is until her former roommate calls with a plea to insert herself into an investigation.

A high school teacher has been murdered in an English countryside mansion.

In a room locked from the inside.

By one of six people - all of whom might want this troubled individual dead.

Struggling to assert her true, perky persona in an unfamiliar senior role, Detective Inspector Alicia Friend embarks on a new phase in her life by attempting to solve an ingenious murder and fix a friendship damaged by recent changes in her life.

To Hide To Seek is A. D. Davies’s take on a traditional British locked room murder mystery that serves as a stand-alone quick read for fans of the genre, as well as TV shows like Death in Paradise and Jonathan Creek.

For regular readers of Alicia Friend’s investigations, To Hide To Seek is number five, a novella approximately one-third the length of a regular instalment.

1. His First His Second

2. In Black In White

3. With Courage With Fear

4. A Friend In Spirit

Cheryl E
TOP 100 REVIEWER
4.0 out of 5 stars The New Alicia And The Old .....
Reviewed in Australia on 9 July 2018
Format: Kindle Edition
It has been so very long since I've visited with our unusual Detective Alicia Friend, and I've missed her! I'd forgotten how cheeky, irreverent and, at times, downright saucy she can be. The complete opposite of how a police officer should act - but, by god, that computer brain of hers does solve cases at a speed and insight that shocks her peers.
Imagine my complete disbelief at the Alicia presented in this novella. 😱 She's all grown up, has a baby and a promotion to Inspector, and it's at the cost of her hilarious personality which chafes her no end. She's a leader now, that junior officers look up to, and decides that with the promotion she must finally act responsibly. (Like ..... what the?!?)
Which brings us to her first murder inquiry post Inspectorship - an unlikely, but intriguing, locked room murder mystery akin to Agatha Christie's best. Complicating matters at the teacher's convention in a refurbished Manor, is the inclusion of Alicia's "bestest friend in the whole world" Robbie.
While mentoring a young DS we find Alicia struggling to solve the murder in her current guise until a fraught interview with Robbie leaves her taking stock not only of her current self but her confusion at being unable to solve the crime. Enter the old Alicia ..... sheeee's baack! ..... to hilarious effect, and she practically romps home in bringing the murderer to justice.
While essentially being the 5th in the Alicia Friend series, this novella works well as a standalone even if you haven't read any of the previous books. Highly recommended for those in awe of Alicia's crime solving skills and personality, as well as those wanting to take a peek at a new series without investing in a full length novel.

I received an ebook from the author via Bookfunnel. I have voluntarily chosen to review the book, and the gifting in no way influences my review/rating, which reflects my honest opinion.

V
3.0 out of 5 stars Leaves you looking for more
Reviewed in Canada on 6 September 2019
Format: Kindle EditionVerified Purchase
Not as good as the first four books and was quite short. Also not sure why I need to say eight more words to e able to submit.
Read more
Helpful
Sending feedback...
Thank you for your feedback.
Sorry, we failed to record your vote. Please try again
Report abuse

Linda
4.0 out of 5 stars Alicia Solves The Murder Her Way
Reviewed in the United States on 19 June 2018
Format: Kindle EditionVerified Purchase
I love this author's work. His series about Alicia Friend is different and very well written. This is Book 5 and she has matured now. Has a baby and has been promoted. She wants to do everything right but it doesn't feel like her. She is solving a murder that occurred inside a locked room. Until she started thinking like her old self, she can't get her head around what happened. There are six suspects including her former roommate. She is mentoring a young Sergeant and wants to do it properly. It is an intriguing tale but not as good as the last book in the series. This one is shorter and doesn't go into how Alicia has changed since becoming a mother and returning to work. By the end of the book she has recaptured her old self, calls her boss up to tell him 'I'm Back!' to which he responds with a not sure we are ready for your old unusual methods. Her methods did solve the crimes so all in all I'm sure the next book will reveal more details about Alicia Friend. You ought to read this series because there are not that many with a strong female lead.
Read more
Helpful
Sending feedback...
Thank you for your feedback.
Sorry, we failed to record your vote. Please try again
Report abuse

Rick Amazon Customer
5.0 out of 5 stars Quick and fun
Reviewed in the United States on 25 June 2019
Format: Kindle EditionVerified Purchase
Alicia does it again, doesn't get into as many problems this time. But still solves the case. Robbie her former roommate is back.
Read more
Helpful
Sending feedback...
Thank you for your feedback.
Sorry, we failed to record your vote. Please try again
Report abuse

linda nash
1.0 out of 5 stars mistake
Reviewed in the United States on 6 November 2019
Format: Kindle EditionVerified Purchase
did not realize was a short story. want to return
Read more
Helpful
Sending feedback...
Thank you for your feedback.
Sorry, we failed to record your vote. Please try again
Report abuse