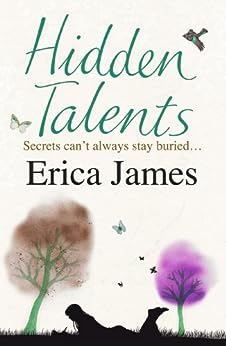 MEDIA 'beautifully executed' Sarah Broadhurst, The Bookseller Review in Juneissue of WOMAN & HOME and PRIMA. WOMAN ALIVE (Christian magazine) interviewed Erica in June issue and an interview also appeared in the LINCOLNSHIRE ECHO to pre-advertise the event at Ottakar's. Reviewed in KNUTSFORD GUARDIAN and LANCASHIRE EVENING TELEGRAPH EVENTSErica has visited several bookshops tocoincide with publication. Ottakar's, Lincoln and Ottakar's Wilmslow were both attended by about 35 people. Lincoln sold 36 copies of Hidden Talents, Wilmslow 22 copies. Erica also visited WHSmith's in Lincoln to sign stock. Her event at Ottakar's Crewe was also a success. The Summer Reading evening with Adele Geras, Rebecca Shaw and Sarah Harrison at Ottakar's, Stafford was unfortunately cancelled due to problems with the venue but as tickets sales were very strong we will be re-scheduling. Erica also attended the Hull Literary Lunch in April --This text refers to the paperback edition.

Bestselling Erica James explores the stories of a potent mix of characters who meet at a creative writers' group. Abridged edition read by Jenny Agutter --This text refers to an out of print or unavailable edition of this title.

Erica James is in her mid-thirties and lives in Cheshire with her two sons. She is the author of five bestselling novels. --This text refers to an out of print or unavailable edition of this title.

Erica James grew up in Hampshire and has since lived in Oxford, Cheshire, Yorkshire and Belgium. She now lives in Cheshire with her two sons, Edward and Samuel. She is the author of seven bestselling novels. --This text refers to the paperback edition.
Read more

4.6 out of 5 stars
4.6 out of 5
109 global ratings
How are ratings calculated?
To calculate the overall star rating and percentage breakdown by star, we don’t use a simple average. Instead, our system considers things like how recent a review is and if the reviewer bought the item on Amazon. It also analyses reviews to verify trustworthiness.

moomin
5.0 out of 5 stars Good Read
Reviewed in the United Kingdom on 15 March 2020
Verified Purchase
Loved this book. Characters depicted so well I felt like one of the Group. Sorry when I finished the book. Shame it could not have been extended for another couple of chapters to know how the Group's lives settled down after the traumas they had been through.
Read more
Report abuse

Mags
5.0 out of 5 stars Enjoyable Read
Reviewed in the United Kingdom on 15 February 2021
Verified Purchase
Thoroughly enjoyed this book.Within a few pages you feel you are getting to know the characters in the story. Enjoyed it so much eanded up reading until 3:30am on one occasion. Really enjoy Erica James books.
Read more
Report abuse

ukgilda
5.0 out of 5 stars hidden talents
Reviewed in the United Kingdom on 30 April 2017
Verified Purchase
i love erica james and this book is no exeption.her characters are all very engaging you feel as if you know them personally. This is a tale about a budding writers group but you find yourself getting caught up in the personal lives of all the members even the horrible sounding victor. A good read.
Read more
Report abuse

yvonne
5.0 out of 5 stars Hidden talents.
Reviewed in the United Kingdom on 18 August 2017
Verified Purchase
I loved this book, it kept me intrigued until the final page. I have read most of erica james books, and she never fails to deliver. Look forward to her next book.
Read more
Report abuse
See all reviews
Back to top
Get to Know Us
Make Money with Us
Let Us Help You
And don't forget:
© 1996-2021, Amazon.com, Inc. or its affiliates