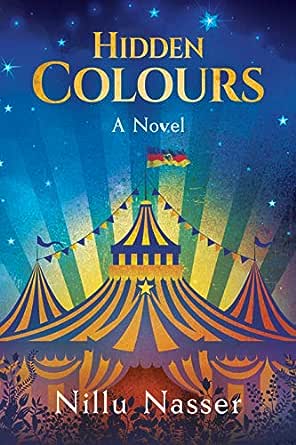 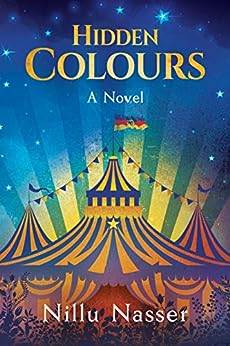 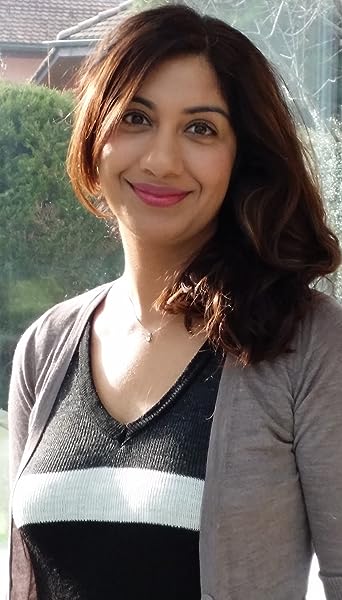 Each evening, nestled in Berlin's Treptower Park, the immigrant circus comes to life.

“A provocative, heartfelt journey from the first page to the striking conclusion.” ~ Alyssa Elmore, from Readers’ Favorite Book Reviews

“In many ways, there is no better time for the appearance of Hidden Colours, with its themes of intolerance, repression, prejudice, and communities clashing with each other as they assimilate immigrant newcomers. The stage is ripe for this story of different perspectives, desires for safety and community, and the issues posed by immigrants who are viewed as threats, and Nillu Nasser does an exquisite job of reflecting this environment and the social and political forces at work among all groups. ... The result is an engrossing portrait of clashes between cultures, shared bonds and points of contention....” ~ D. Donovan, Senior Reviewer, Midwest Book Review

When Yusuf fled Syria, he lost everything. Now the circus, with its middle-eastern flair, is the only home he knows. When the lights go on, the refugees dazzle their audience, but off-stage tensions flare.

Ellie is passionate about the circus and drawn to its broken people. Even so, if she wants to keep her job at the newspaper, she must head up a campaign against it.

One night, in the midst of a show, two young circus boys come to blows. With the circus at risk of closure, Ellie must convince her readers that we can have compassion for those we fear, or Yusuf will be forced to uproot again.

“Hidden Colours is a must-read for those who enjoy interpersonal drama and are also concerned with the cold, discriminatory hatred that’s seeping into our world.” ~ K.C. Finn, Readers’ Favorite Book Reviews

AUTHOR: Nillu Nasser is a writer of literary fiction novels. She also blogs, writes short fiction and poetry. Nillu has a BA in English and German Literature and an MA in European Politics. After graduating, she worked in national and regional politics, but eventually reverted to her first love. She lives in London with her husband, three children, one angelic cat and one demonic cat, though she secretly yearns for a dog. If you fly into Gatwick and look hard enough, you will see her furiously scribbling in her garden office, where she is working on her next story.

EDITOR: In 2014, I eased into editing. A critique group made its way onto my priority list. If a writer buddy needed a beta read, I jumped at the chance to apply a critical eye as well as positive reinforcement to the task. With every project I worked on, whether writing or offering constructive criticism, I aimed to improve my craft as I helped my fellow author. Becoming an editor wasn't my goal, but as I learned more about the mechanics of writing, a natural evolution occurred. My editing skills grew at a much more rapid pace than my writing skills did. Since 2014, I've edited countless anthologies, novels, and independent short works from various authors. I wish I had counted. That number would be pretty handy right about now. My primary focus is on speculative fiction, but I'm also interested in women's fiction and romance.

Lee W
TOP 50 REVIEWER
4.0 out of 5 stars Excellent read
Reviewed in Australia on 9 April 2019
Format: Kindle EditionVerified Purchase
Well written book as it delves into the lives and feelings of a group of Syrian refugees who have perfected circus skills and are trying to stay in Germany, a safe country where there is peace and stability. The author is clear on the disadvantages of an accented speech and skin darker than white... how both influence their lives greatly tho their hearts are good. This is a story of people, of prejudice, of dark doings for political gain at the expense of others and what bravery can [sometimes] achieve.

I very much enjoyed the book, enjoyed and learned from the author's insights. At times, especially nearing the end, I felt the author was overdoing it and some of the ending was a bit fairytale. But overall, it is a book that should be read, understood and appreciated. We are all the same under the skin and beyond the accent and much richer for the infusion of many cultures.

K
5.0 out of 5 stars Pride and prejudices.
Reviewed in the United Kingdom on 19 January 2019
Format: Kindle EditionVerified Purchase
A circus comes to town, a symbol of modern Berlin’s multiculturalism, a mirage-like edifice that can be seen for miles around. Many of the performers are refugees from war-torn countries in the Middle East and the circus is their lifeboat.
But all is not well in Berlin. The refusal of refugees to conform is seen by many as an affront to the German way of life, bringing a groundswell of mistrust and prejudices bubbling to the surface.
Compelling from the start, Nillu Nasser brings us an authoritative fictional account of the plight of a diaspora of immigrants trying to adapt to life in a new land. Respect to Nasser for not shying away from a controversial subject and, although the culture clash premise is tackled head-on, it’s handled with a great deal of fairness and sensitivity.
The real villain of the piece is unscrupulous Rex Silberling, the Federal Interior Minister. This self-serving piece of inhumanity knows an opportunity when he sees one and covertly orchestrates a campaign against the Muslim community he’s supposed to support.
The antidote to Silberling’s intolerance is an idealist newspaper reporter, Ellie Richter, who symbolises the voice of reason. Ellie is proud of Berlin’s ethnic inclusiveness: her hometown ‘spoke to who you were and who you would become’.
Against a backdrop of increasing Islamophobia and hate attacks, the author had me hoping that good would triumph against evil, that Silberling would get his comeuppance and that Yusuf, a Syrian refugee and circus acrobat, would finally feel welcome in his adoptive home.
Nasser writes tenderly and eloquently about subjects close to her heart (the tribute to the sacrifices made by her own immigrant nana was heartfelt and befitted the theme of the story perfectly).
The story held me captive from optimistic start to dramatic finish; she employs metaphors and symbolism to good effect and the lead characters were clearly defined.
This is the second book that I’ve read by this talented author and I look forward to more!
Read more
Helpful
Sending feedback...
Thank you for your feedback.
Sorry, we failed to record your vote. Please try again
Report abuse

Kindle Customer
3.0 out of 5 stars Easy read
Reviewed in the United Kingdom on 11 March 2019
Format: Kindle EditionVerified Purchase
A nice, easy ready, but unrealistic and romanticised. The characters and story lacked depth. The reason for what happens between Simeon and Dawud is never explained. Also the circus is supposed to be a family but no one visits Simeon in hospital?
Read more
Helpful
Sending feedback...
Thank you for your feedback.
Sorry, we failed to record your vote. Please try again
Report abuse

Meg Collett
5.0 out of 5 stars Rich, luxious writing that will captivate
Reviewed in the United States on 4 December 2018
Format: Kindle EditionVerified Purchase
Hidden Colours is one of those books that becomes a full sensory experience as you read. The world is written so richly, and the characters are intricate and delicate beings that force you to keep turning page after page. Nillu Nassar has always been a deft hand at writing books that tug at your heartstrings and transport you to an experience outside of your own, as all the best authors do. I enjoyed every moment with this book as much as I did when I first read All The Tomorrows.
Read more
3 people found this helpful
Helpful
Sending feedback...
Thank you for your feedback.
Sorry, we failed to record your vote. Please try again
Report abuse

Bernard F. Pilon
5.0 out of 5 stars Driven
Reviewed in the United States on 11 February 2019
Format: Kindle EditionVerified Purchase
Nillu magic as a master story teller continues in this reality check thrill driven novel. It is as moving as it is suspenseful, striking right to the heart of what it means to be human . Read it with passion !!
Read more
One person found this helpful
Helpful
Sending feedback...
Thank you for your feedback.
Sorry, we failed to record your vote. Please try again
Report abuse