Hexwood and over 1.5 million other books are available for Amazon Kindle . Learn more
Share <Embed> 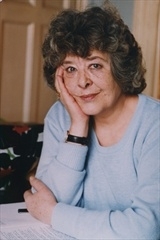 Page 1 of 1 Start overPage 1 of 1
Previous page
Next page
Start reading Hexwood on your Kindle in under a minute.

“…Her hallmarks include laugh-aloud humour, plenty of magic and imaginative array of alternate worlds. Yet, at the same time, a great seriousness is present in all of her novels, a sense of urgency that links Jones’s most outrageous plots to her readers’ hopes and fears…”
Publishers Weekly

Diana Wynne Jones (1934–2011) spent her childhood in Essex and began writing fantasy novels for children in the 1970s. With her unique combination of magic, humour and imagination, she enthralled generations of children and adults with her work. She won the Guardian Award in 1977 with Charmed Life, was runner-up for the Children's Book Award in 1981 and was twice runner-up for the Carnegie Medal.

Samrosie
5.0 out of 5 stars A puzzle book of a book
Reviewed in Australia on 8 April 2015
Twisty and clever
Typical DWJ nontypical tale, and it all comes together in the end
Read more
Helpful
Report abuse
See all reviews

Katri-Mills
4.0 out of 5 stars I wish I'd read the blurb first... but I got there
Reviewed in the United Kingdom on 27 October 2019
Verified Purchase
I like the author and that's why I bought the book. Hence, I didn't read the blurb. If I had known it wasn't written in chronological order, I never would have bought it.

But I powered through. It turned out to be an interesting read, but it took me over a week to read it, when it should have taken less than a day. The out-of-sync nature didn't feel necessary. It helped to hide some of the characters' identities, but for some of them, who would have guessed anyway?

I am naturally a tad negative, so if this reads as though I hated it, allow me to clarify: it was actually pretty good. Once I got over the timing issues, the story flowed quite nicely. As I learnt about some of the characters, they became a lot easier to accept, and I really started to root for them, particularly Hume.

The story is quite dated, and you can tell, but don't let that put you off. This one will make the shelf, once I've made room. In fact, I may have to buy another bookcase.
Read more
Report abuse

Jayra
5.0 out of 5 stars Diana Wynne Jones spins her magic again!
Reviewed in the United Kingdom on 10 July 2020
Verified Purchase
It is a shame that this author is not more widely known. I have enjoyed and still enjoy her imaginative fantasies in her books - there are more popular characters from her pen in other books, of course, but i am enjoying this one too. Am halfway through the book and it a pleasure to read.
Read more
Report abuse

Ms Louise Wilford
4.0 out of 5 stars Confusing but enjoyable
Reviewed in the United Kingdom on 19 November 2013
Verified Purchase
Hexwood was one of the most confusing Diana Wynne Jones books I've read, and it is difficult to comment on the plot without giving away the central idea. Suffice it to say that Jones's trademark wit and cleverness has created a compelling, unpredictable, often rather strange tale which involves the typical Diana Wynne Jones features of a love story, a rather frightening atmosphere of mystery and complication, moments of humour, and some excellent descriptions. The plot is complex to the point of confusion but it does eventually come together and its well worth sticking with it for the final unveil, as the various plot strands come together. After reading it, I understood what Jones was trying to do and how skillfully she'd managed it, though if it had been my first venture into Jones territory I might not have stuck with it for long enough to appreciate its skill. Atmospheric, gripping, peculiar and imaginative, I would recommend this novel to fans of Diana Wynne Jones.
Read more
Report abuse

K. Rush
5.0 out of 5 stars Fascinating
Reviewed in the United Kingdom on 23 July 2009
Verified Purchase
One of my favourite of Diana Wynne Jones books and since I love all of them this is real praise. A complex mystery plot that draws you in. Just when you think you see where the plot is going, the magic of the Hexwood shifts something and you see events from a new perspective. By the end of the story you think 'Oh yes I see now' and have to read it all over again to spot the clues that you missed first time around. It is so well constructed that each time I read it I see something new. I can't describe the plot without giving away some of the secrets it is such fun to uncover for yourself. It is definitely suitable for bright teenagers and adults but some scenes can be horrifying; others move you to tears. Go and read it - at least 3 times - you won't be bored even after the 10th time.
Read more
3 people found this helpful
Report abuse

Suz77
5.0 out of 5 stars Unmissable
Reviewed in the United Kingdom on 22 August 2018
Verified Purchase
Oh the magical complexities of Diana Wynne Jones’ mind! I was absolutely glued to this book - one of her best in my opinion 😄 lots of depth to the characters and a fascinating plot unfolding over several alleged time lines and realities. Amazing happenings unfold as the characters are forced to take part as a myriad of imaginary players. Some of the events are very dark and a variety of difficult emotions are explored. All in all a very satisfying conclusion. I couldn’t put it down.
Read more
Report abuse
See all reviews
Get FREE delivery with Amazon Prime
Prime members enjoy FREE Delivery and exclusive access to movies, TV shows, music, Kindle e-books, Twitch Prime, and more.
> Get Started
Back to top
Get to Know Us
Make Money with Us
Let Us Help You
And don't forget:
© 1996-2020, Amazon.com, Inc. or its affiliates