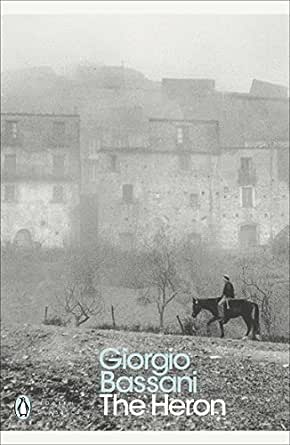 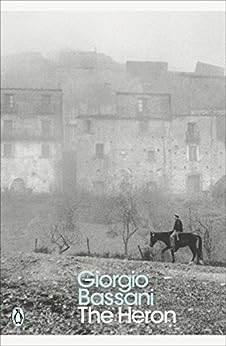 Exquisite. . . a classic tour de force that will be around for a long time (The New York Times)

Giorgio Bassani is one of the great witnesses of this century, and one of its great artists (Guardian)

A new translation of Bassani's haunting last novel- a portrait of a middle-aged man's reckoning with life and loneliness.
See all Product description
click to open popover

Dale W. Boyer
5.0 out of 5 stars Bassani's Masterpiece
8 May 2019 - Published on Amazon.com
Verified Purchase
I've now read all of the Ferrara novels, and of them all, The Heron may be Bassani's greatest. It is quite possibly the saddest novel I've ever read, and an absolute masterpiece. It bears great similarity to The Leopard, but is, if possible, even sadder. Drifting alone through a world in which he no longer feels he has a place, the main character's plight becomes almost unbearably moving . There are so many masterpieces within Bassani's works: The Garden of Finzi-Continis, The Gold-Rimmed Spectacles, and a number of his short stories, but this is perhaps the grandest and most perfect of them all.
Read more

The main character is 45-year-old man. It’s just after WW II in Italy. He still lives in his childhood home with his mother who sets out his underwear for his hunting trip, even though he has a wife and a young daughter who live with him too. He worries that the communists, then a strong political force in Italian politics, will take away his 1000-acre estate.

The man character is Jewish and suffered during the war under the fascist era in Italy. We get no details of his ordeal other than that he may have gone into exile for a while and that he had to put his estate into the name of his Catholic daughter-in-law, and that’s still the case.

He feels separate from all those around him, like he is looking at life through a pane of glass. He watches a group of rich diners enjoying themselves and then he watches the comradery of a group of working men playing cards, drinking and smoking. He feels like an outcast; he feels an inability to enjoy himself or to care about anything or anyone.

He has feelings of absurdity. No relations with his wife, and not even much affection for his daughter --- he’s not even sure he is her father. He doesn’t know why he and his wife don’t separate. It’s probably because it would require some volition on his part to do so and he has none.

He has nothing to look forward to, nothing to care about. He’s lost touch with his only friend, a cousin. In his own words he feels plunged into a “grim well of slothful sadness.” Most of the book is about his preparing for a hunting trip that he’s not really interested in going on; he gives his gun to his guide and lets him do the shooting.

He thinks “You only have to look at the affairs of life from a certain distance to conclude that they were worth, all of them, only what they were worth: namely nothing, or almost nothing.” And that life has become for him a “…monotonous round of eating and defecating, of drinking and urinating, of sleeping and waking up, of moving about and standing still...”

While hunting we are introduced to the dazed, befuddled and confused heron that gets mixed in with the ducks. After the hunt (he gives all the birds away) he becomes enamored with the stuffed animals in a taxidermist shop and imagines that they “look more alive than if they were alive.”

He finds a solution to his problems.

Melancholy and depressing, but good literature. A lot of local color of a rural, marshy, small town area near Ferrara in northern Italy.

Bassani (1916-2000) wrote a half-dozen novels and won all of Italy’s major literary prizes, including the Strega. He is credited with editing and bringing Lampedusa’s The Leopard to press (posthumously) after other publishers rejected it. Perhaps he is best known for his novel made into a film of the same name, The Garden of the Finzi-Continis.
Read more
2 people found this helpful
Go to Amazon.com to see all 2 reviews 4.5 out of 5 stars
Get FREE delivery with Amazon Prime
Prime members enjoy FREE Delivery and exclusive access to movies, TV shows, music, Kindle e-books, Twitch Prime, and more.
> Get Started
Back to top
Get to Know Us
Make Money with Us
Let Us Help You
And don't forget:
© 1996-2020, Amazon.com, Inc. or its affiliates