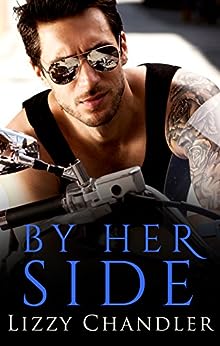 By Her Side Kindle Edition

by Lizzy Chandler (Author) Format: Kindle Edition
See all formats and editions
Sorry, there was a problem loading this page. Try again.

She would trust him with her life. But can either of them trust their hearts?

Rory Sutton Whitfield isn't a princess, even though her wealthy family insists on treating her like one. Fresh from her travels and finally achieving the independence she craves, the last thing she wants is to become swept up in family problems. But her half–brother has disappeared and her grandfather insists on hiring a bodyguard for her. Rory won't be controlled by anyone, especially not a taciturn detective like Vince Maroney, a man of few words who nonetheless arouses disturbing emotions.

Vince Maroney has learned his lesson about playing the hero; he stepped up once and it cost him everything. But when he saves the granddaughter of one of Sydney's wealthiest men, he finds himself embroiled in events beyond his control. Rory is beautiful, smart, independent. But her family is all secrets and lies, money papered over injustices. Rory makes him feel things he thought long dead, but the pains of the past create distance, and she comes from a completely different world. How can one of Sydney's pampered princesses ever find common ground with her reluctant bodyguard?

Deborah Cook (@ Debbish dot com)
4.0 out of 5 stars Aussie romantic suspense - an enjoyable and easy read!
Reviewed in Australia on 9 December 2015
Chandler’s created really likeable characters in Rory and Vince. She could have gone with caricatures (the poor little rich girl and love interest from the other side of the tracks) but stops short of that and grounds both characters with layers of complexity.

I also loved the fact there’s no game-playing.

Both Rory and Vince feel an attraction to the other and have some misgivings, but the will they / won’t they? doesn’t take over the book. And when the issue is finally broached I love that it’s done in quite a sweet manner. This may border on a #spoiler, but one of them basically presents their feelings to the other which I found to be both honest and brave (and obviously realistic cos I’m commenting on the character’s behaviour as if they were a real person!).

The novel’s short at only about 150 pages which allows it to keep a good pace. The plot itself is interesting and I found myself engaged in what was unfolding.

I’d been warned about the romance / sex scenes before I read this book so I was a tad nervous but quite frankly it’s not gruesome and is handled really well.

This is an enjoyable and easy read, offering up a solid plot and delightful characters.

Read the full review on my blog: http://www.debbish.com/books-literature/by-her-side-by-lizzy-chandler/

Veronica
4.0 out of 5 stars Romantic suspense
Reviewed in Australia on 16 January 2016
Detective Sergeant Vince Maroney is on a well earned break from his unrelenting work schedule when he saves Rory Whitfield from the path of a speeding vehicle. Rory’s grandfather is the wealthy Edward Sutton. Sutton now feels that Rory needs a bodyguard and he is convinced Vince is just the man for the job. Rory definitely doesn’t agree but maybe Det. Vince Maroney can help her find her brother Jamie who has been missing for weeks, and he’s pretty damn good looking as well.

I loved this bodyguard to lover romance read. Vince was a tortured soul but whom better to soothe him than the lovely Rory, who was suffering from her own broken heart.
The story is told from changing POV which encourages the reader to empathise with each character’s angst.

By Her Side starts as a slow paced emotion packed read but as the tension builds and the mystery of Jamie’s disappearance escalates so does the pace. With breath holding suspense and a twist I didn’t see coming this is a must read for all lovers of the romantic suspense genre.

With my thanks to the publisher via Netgalley for my copy to read and review.
Read more
Helpful
Report abuse
See all reviews

Avid Reader
5.0 out of 5 stars Fantastic
Reviewed in the United States on 21 December 2015
Verified Purchase
A mysterious hit and run accident starts the ball rolling in Chandler's second novel. Vince, the hero, is gorgeous old school hero material. Indepenant Rory isn't expecting to fall in love but how can she help herself with Vince? Sensitive and tender in places. I couldn't get enough of Vince. This is a wonderful romance.
A wonderful read.
Read more
Report abuse

Deb Bennetto
5.0 out of 5 stars Engrossing read
Reviewed in the United States on 5 September 2016
Verified Purchase
Set in Sydney and the Blue Mountains of New South Wales this thriller/romance had me hooked from beginning to end. The ending was a very satisfying surprise. The lead characters Rory and Vince were engaging and sympathetic and, even though they came from very different backgrounds, their lovestory was believable. The story is peppered with just enough detail about the setting to bring it to life without bogging it down. I'd highly recommend this book.
Read more
Report abuse