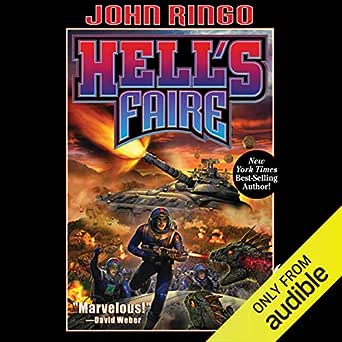 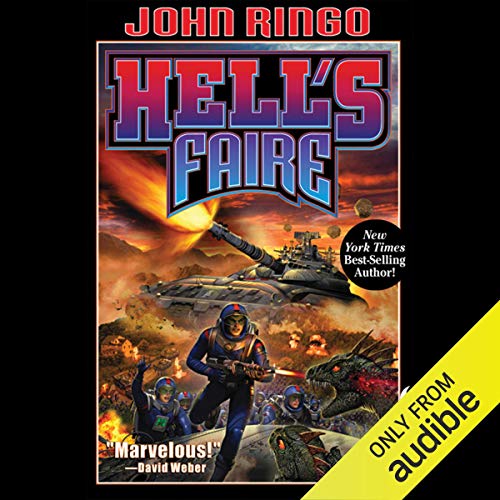 Hell's Faire: Legacy of the Aldenata

Hell's Faire: Legacy of the Aldenata
John Ringo (Author), Marc Vietor (Narrator), Audible Studios (Publisher)
Get this audiobook plus a second, free. Audible is $16.45 for 1 credit/mo after 30 days. Cancel anytime.

Jahn Hemmett
3.0 out of 5 stars Too many contrived resurrections
Reviewed in Australia on 3 September 2019
Verified Purchase
Although I thoroughly enjoy the the battle action and felt the impact of characters deaths the constant resurrection of characters by alien magic seemed contrived. The sudden arrival of the fleet to save everyone's bacon without any dramatic buildup was a letdown probably for the author to meet a publishers deadline. This said I'm still hooked on John Ringo's novels. He did mention his problem finishing this one after 9/11 in the afterword, so he can be forgiven. I look forward to reading more of his works
Read more
Helpful
Comment Report abuse
See all reviews from Australia

Dave
5.0 out of 5 stars Brilliant
Reviewed in the United Kingdom on 1 December 2016
Verified Purchase
Really easy to read and gets the reader into it.
Read more
Helpful
Sending feedback...
Thank you for your feedback.
Sorry, we failed to record your vote. Please try again
Report abuse

Robin Pritchard
5.0 out of 5 stars Great military SF
Reviewed in the United Kingdom on 6 September 2013
Verified Purchase
Rip roaring action, with strong characters and even some smart humour too. If you love action, tech and SF, you can't go wrong really!
Read more
Helpful
Sending feedback...
Thank you for your feedback.
Sorry, we failed to record your vote. Please try again
Report abuse

Folkie
1.0 out of 5 stars Ran out of steam
Reviewed in Canada on 2 March 2017
Verified Purchase
In the afterword, Ringo states that he is tired of writing about the human-Posleen wars. He also states that 9-11 totally destroyed his focus. I highly recommend skipping the 3rd and 4th books in the series, however much fun the first two books were. My copy of this fourth book is full of red highlights - stuff that bugged me, and there's darned little that felt clever, exciting, uplifting, or particularly engaging. By the end, I had stopped believing, not just in the plot, but in the setting entirely, and was even feeling annoyed with the believability of some of the actions of the newer characters.
Read more
Helpful
Sending feedback...
Thank you for your feedback.
Sorry, we failed to record your vote. Please try again
Report abuse

Pearlseattle
4.0 out of 5 stars Only for Ringo-fans
Reviewed in the United States on 16 April 2016
Verified Purchase
This is a global review of the whole series (Legacy of the Aldenata - Amazon might return another series name, but this seem to be the correct title):
1- A hymn before battle
2- Gust Front
3- When the devil dances
4- Hell's faire
=================
#1
It was absolutely exact & terrible, hehe... .
John Ringo shows basically that he knows everything about the military, but most of the time it's not relevant for the story itself => after having read everything up to 50% of the book I had to start jumping pages.
-1 star because I won't read it again
-1 star because I had to push to keep on reading
-1 star because there were too many people & situations involved - especially too many situation switches (I'm swiss, so no detailed knowledge of US geography)

#2, #3, #4:
Personally I give them all between 3 and 4 stars.
I did see a big improvement between #1 and the rest, but they're all still too detailed for my taste, and I don't think I'll read any of them again.

Major Havoc
5.0 out of 5 stars Another interesting read.
Reviewed in the United States on 11 January 2017
Verified Purchase
I missed out on this series because I was a cross country truck driver at the time these first four books were published, and I can tell you that most truck stops only rent old audiobooks instead of selling paperback or hard cover books.

I joined the US Army a few years after John Ringo had joined and we even served in the same areas, unfortunately I never got to meet him because I was only a truck driver that mainly drove for the Special Forces community.
Some of the details in this book is not totally accurate as far as the military goes, but it did drastically change after the author ETSd.

I am looking forward to buying the rest of this series and will recommend it to a few of my buddies who are science fiction fans.
Read more
Helpful
Sending feedback...
Thank you for your feedback.
Sorry, we failed to record your vote. Please try again
Report abuse

Mike McFall
5.0 out of 5 stars Great read on a continuing saga.
Reviewed in the United States on 12 June 2014
Verified Purchase
Yes you definately should read the previous books in the series, just to improve your situational awareness. Can it be read by itself. Yes, just like a good cake can be eaten without frosting. However the best is to have it all together, The action in this book is John Ringo's usual fast paced and hard hitting. It is like the others in this series hard to put down. I tend to read this series in one to two sittings per book as there are no real lulls like other writers have even in their best works.
Read more
One person found this helpful
Helpful
Sending feedback...
Thank you for your feedback.
Sorry, we failed to record your vote. Please try again
Report abuse

CS Matthew
5.0 out of 5 stars Awesome!
Reviewed in the United States on 3 May 2017
Verified Purchase
This book strung out a lot of story threads and tied them together in a perfect knot. A rollercoaster ride of epic proportions. From the first book and chapter, to book 4's last chapter, a very satisfying read. I highly recommend this series to anyone interested in futuristic military action and, of course, space invaders.
Read more
Helpful
Sending feedback...
Thank you for your feedback.
Sorry, we failed to record your vote. Please try again
Report abuse
Load more international reviews

DanPurserMD
5.0 out of 5 stars Great last book of the series!!!
Reviewed in the United States on 28 May 2018
Verified Purchase
Wonderful ending. And the epilogue was sweet.

Goodbye POSLEEN and leave and live in shame. Also, the Darhel need to be settled with so hopefully more boooks in the series will come.

Thanks for the series , Johnny RIngo.
Read more
Helpful
Sending feedback...
Thank you for your feedback.
Sorry, we failed to record your vote. Please try again
Report abuse

Brian Lee Gnad (The Bubba Man)
5.0 out of 5 stars Die Poslean, Die!
Reviewed in the United States on 10 April 2018
Verified Purchase
Reading this again!
First read was after waiting for it to come out.
Now I'm not sure how many times I've read it.
And I'll read it again.
Do I really need to say more?
Read more
Helpful
Sending feedback...
Thank you for your feedback.
Sorry, we failed to record your vote. Please try again
Report abuse

Ruykann
1.0 out of 5 stars Rating for the series as a whole
Reviewed in the United States on 10 May 2016
Verified Purchase
With book one the series had a lot of potential and that is why I ultimately give it a one star. Potential wasted and very sloppy world building. The series becomes a set of hackneyed battles with almost no plot development, no meaningful character development or character depth/diversity and almost no internal world building consistency. It's sci-fi, so you can do whatever you want, but for my part even the battles, the highlight of the series, are too contrived. The author changes weapons, tactics and effects with only rare consistency and the plot blunders along. The bad guys have high tech but can't use it, advanced computer systems but can't fly ships, can fly them in worm holes but not on the ground, have access to orbital bombardment, then don't, have access to amazing weaponry one battle then not the next. The good guys are just as bad. Access to nukes then not, terawatt lasers then not, amazing tanks then not. Giant air fuel bombs and amazing combat engineers, then not. The ACS was at some point going to defend the Southwest, then the Rockies or Great Plains? Then they end up defending the Appalachians instead with giant walls? Preventing armies from going East to West or West to East? Wait, so the Posleen are on the Coastal Plains but can't reach the Appalachians from the Great Plains? Or we've decided to defend the Appalachians instead of the Sierras or the Rockies? The author does realize the Appalachians are like foothills compared to the Sierras or Rockies right? Or is the whole book based around random places on the East Coast, not because this makes sense for world building, but because that is what the author knows best? All of these things are completely unclear and with almost no internal consistency. You can lay out any world you want but please try to make it hold together in even some basic fragmentary way. Then boom! The author reaches his contractual page or word limit agreement and Fleet shows up. Magic orbital bombardment reappears! Game over. All the battles are rendered relatively meaningless. Some of the worst sci-fi or military sci-fi I've ever read. Very disappointing.
Read more
2 people found this helpful
Helpful
Sending feedback...
Thank you for your feedback.
Sorry, we failed to record your vote. Please try again
Report abuse

Kindle Customer
5.0 out of 5 stars Great read
Reviewed in the United States on 8 November 2018
Verified Purchase
Second time around, this series is still awesome. I finally have all the books in the series and I look forward to finishing the whole series in order
Read more
Helpful
Sending feedback...
Thank you for your feedback.
Sorry, we failed to record your vote. Please try again
Report abuse

MR Derek
3.0 out of 5 stars Bubblegum, explosions & team America (%u#k yeah!)
Reviewed in the United States on 14 October 2018
Verified Purchase
A fun series of action novels with lots of backslapping and manliness. It is military sci-fi so don’t expect anything else. For me the series peaked at book three, but it was all fun.
Read more
Helpful
Sending feedback...
Thank you for your feedback.
Sorry, we failed to record your vote. Please try again
Report abuse