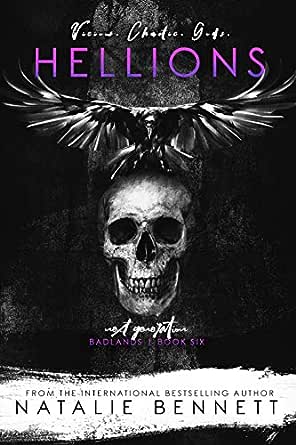 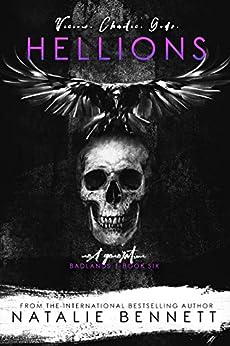 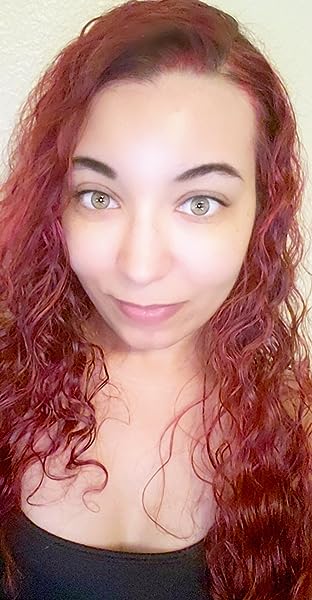 RoseyPosey
5.0 out of 5 stars 5 Star read
Reviewed in Australia on 3 January 2020
Hellions... Malik and Nyx ...if it was t for Zane and Addy being the Venomous Prince and Savage Princess then these two would be next in-line to rule the Badlands ...

Loved this book to bits and the continuing storyline has kept me on the edge of my seat ... can’t wait for book 3

karlie lindsay
5.0 out of 5 stars ⭐️⭐️⭐️⭐️⭐️
Reviewed in Australia on 2 April 2019
Wow the wait was totally worth it for hellions,just sh$&,it was everything I could of asked for,for nyx and Maliki.
There is surprises you don’t see coming and leave you with WTF just happened hahaha.
I can’t wait for the next
Read more
Helpful
Comment Report abuse

Cristy O'Shaughnessy
5.0 out of 5 stars DARK DARK DARK
Reviewed in Australia on 6 November 2019
Brilliant book, All that betrayal, and all the twists and turns. Can't wait for the next. By far one of my favorite series.
Read more
Helpful
Comment Report abuse
See all reviews

And things just got more twisted…

I know this entire series is all kinds of twisted goodness, no denying that, but this twisted is a different kind and one I didn’t see coming, but considering who we are talking about, maybe I should have…

But on to Maliki and Nyx...I loved and adored these two. They have this crazy sort of controlled calm thing going on, which I know doesn’t necessarily make total sense, but it’s how I felt as I got to know them. Yes, they are dark and vicious and thrive, not only in the chaos of their minds, but with what is going on around them, but they don’t go off half-c@#ked in anything. They deliberate and have a plan ~ or as much of one as they can ~ and tend to do the right thing for those they call their own.

As for their relationship and it’s evolution. It wasn’t as craycray as I thought it would be, but it was still a fun ride to watch as they danced around each other and finally with each other. It wasn’t AS angsty as it could be, but the push/pull was a lot of fun and I liked how they built a friendship between them before the gauntlet was thrown down, and let me tell you, that gauntlet was actually kinda sweet ~ I know, sweet is NOT a word I’d’ve thought to use, but it was and I simply found them to be perfect for each other.

I devoured this baby. I did . It wasn’t as chaotic as Degenerates was, IMHO, but the things that happen in this one were just as intense and considering all the info that was let loose...well, I cannot wait to get my hands on Renegades to see what will happen next!
Read more
One person found this helpful
Report abuse

boom boom
4.0 out of 5 stars So happy for this to finally be available
Reviewed in the United States on 5 April 2019
Verified Purchase
I love this author. I always look out for her books cause they’re always a great read. I liked the book but it feels disjointed. The previous book had the parents pit some input but this one not so much. ***POSSIBLE SPOILER*** Cobra and Blue had nothing to say to their son? Romero? Even Grimm didn’t seem to have any thoughts about Sam. I know the book is not about them but the last book they had a scene. This one needed that input and it felt like a missed opportunity.
Also, these degenerates are more careless. Honestly, it’s because they’re the main character that they’re still alive. They all should be dead right now because of poor planning-seriously (but I’m glad they’re not). With that said, I am still looking forward to the next one. This is such a pushing the envelope kind of book that i can overlook the issues I have.
Read more
Report abuse

Deviantprincess24
5.0 out of 5 stars WHAT THE???
Reviewed in the United States on 10 April 2019
Verified Purchase
On boy where to start!! These books just keep getting better a d better. I do now Natalie does but every Badlands book is amazing but as they go on they are so much more. The suspense, twisted diversion and complete mind fckry keep you on the edge of your seat wanting the next book and definitely not wanting it to end.
The story of Nate and Maliki is definitely a beautifully twisted pairing that needed to happen. Two like souls that needed to be together and feed off each other only to be one more twisted soul. They're love story was definitely a unique one that needed to be told and their scars so alike and demented they just called to the other.
Natalie Bennett you did it again i cannot wait for the next book. Must read this
Read more
Report abuse

Megan Mary
5.0 out of 5 stars The Badlands is definitely one of my favorite book worlds to visit 🖤
Reviewed in the United States on 5 April 2019
Verified Purchase
What just happened? Can a girl drink..maybe a fan..perhaps a straight jacket?

Hellions (Nyx & Maliki's Story) was jam packed full of all the dark twists & turns, a connection between two people that was surprisingly more emotional than I expected but I LOVED IT 🖤 and all the gruesome adventures into the Badlands....I have been a fan of this series from the beginning but the Next Generation books are just something else! More twists, more secrets & so many jaw dropping moments that have left me with one heck of a book hangover and a list a mile long of questions...The Badlands is definitely one of my favorite book worlds to visit (book hangovers and all) & I cannot wait for the next book in this series 🖤
Read more
Report abuse

Mary S.
5.0 out of 5 stars It's getting better and better!!
Reviewed in the United States on 6 March 2020
Verified Purchase
OMG! This just getting better and better. Love the way this stories ended they are not left in a cliffhanger but they still leave you so excited to get to the next one and to know what on earth is going on. This series is definitely the best love reading Maliki and Nyx.
Read more
Report abuse
See all reviews
Get FREE delivery with Amazon Prime
Prime members enjoy FREE Delivery and exclusive access to movies, TV shows, music, Kindle e-books, Twitch Prime, and more.
> Get Started
Back to top
Get to Know Us
Make Money with Us
Let Us Help You
And don't forget:
© 1996-2020, Amazon.com, Inc. or its affiliates