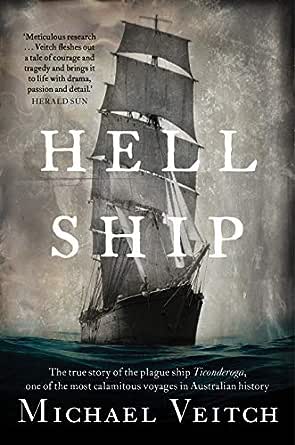 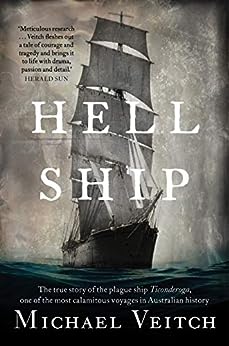 Hell Ship: The true story of the plague ship Ticonderoga, one of the most calamitous voyages in Australian history Kindle Edition

Michael Veitch hails from a family of journalists, but for years he dodged his dynastic responsibilities, preferring instead to write and perform in television sketch comedy, then later in stage productions. But blood will out, and after several years contributing to various newspapers as a freelance writer and theatre critic, he explored his life-long interest in the aviation of the Second World War in his first book, Flak, and now Fly.

Michael Veitch is a multi-talented writer, performer and presenter. He has an academic background in history but made his name as part of the ABC’s cult hit The D-Generation, followed by Fast Forward, Full Frontal and more. For five years he was the face of ABC television’s national weekly arts program, Sunday Arts, followed by a three year stint on ABC Radio, broadcasting across Tasmania and Victoria.

The riveting story of one of the most calamitous voyages in Australian history, the plague-stricken sailing ship Ticonderoga that left England for Victoria with 800 doomed emigrants on board.
Read more

Annette C, Australia
4.0 out of 5 stars Fascinating
Reviewed in Australia on 23 September 2019
Verified Purchase
So much of Australia’s colonial settlement history remains unknown to modern day Australians, and yet it is so very recent. This wonderful book opens a door into a period of Victoria’s history that educates and enlightens us to the reality of the mammoth journeys made by so many of our close ancestors. It gives a taste of the times and the culture of early Victorian settlement. Thank you Michael for sharing this amazing piece of your family’s arrival in Australia.
Read more
Helpful
Comment Report abuse

Frank B.
3.0 out of 5 stars I did not enjoy reading & did not finish.
Reviewed in Australia on 6 October 2019
Verified Purchase
Nautical errors & more journalist than book author. There is a lot of useful detail which I am interested in but life is too short to finish.
Read more
One person found this helpful
Helpful
Comment Report abuse

Mr. D. G. Hutchinson
4.0 out of 5 stars Interesting and engaging history - particularly if you’re from Melbourne.
Reviewed in Australia on 30 August 2018
Verified Purchase
A great read. The background to the semi-forced emigration of Scottish Highlanders was something I didn’t know. And the economic dislocation of the Gold Rush was interesting. Michael has a nice writing style. Well researched. I liked it a lot. His other books are good too.
Read more
Helpful
Comment Report abuse

Paul
4.0 out of 5 stars Plague Ship Ticonderoga
Reviewed in Australia on 29 June 2019
Verified Purchase
This is genrally a good read. I was a little disappointed near the start of the book that there were a couple of minor historical errors, however, I still really enjoyed the book. It really starts to flow after the first 70-pages.
Read more
Helpful
Comment Report abuse

Nanna Sue
5.0 out of 5 stars A true story
Reviewed in Australia on 24 September 2019
Verified Purchase
Thoroughly enjoyed reading this historical account of what early immigrants endured to come to Australia. Would recommend to anyone who interested in our early history.
Read more
Helpful
Comment Report abuse

Amazon Customer
3.0 out of 5 stars Early sea travel conditions endured in 1850s by settlers to Australia
Reviewed in Australia on 16 October 2018
Verified Purchase
Graphic description of of early settlement in Australia and the hardship and the courage given in their sea transport to Australia
Read more
Helpful
Comment Report abuse

Viki Moore
5.0 out of 5 stars A desperate voyage
Reviewed in the United States on 11 December 2018
Verified Purchase
After having recently traveled to Scotland to see the place where my partner's crofting family lived before emigrating to Australia, this book brought to life the experience they may have had. Unable to stay in their homeland, but the voyage ahead was filled with much risk and adversity. This book pulls together many threads of history and weaves it in to an interesting and informative story.
Read more
One person found this helpful
Helpful
Sending feedback...
Thank you for your feedback.
Sorry, we failed to record your vote. Please try again
Report abuse