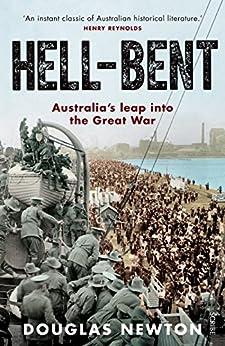 by Douglas Newton (Author) Format: Kindle Edition
See all formats and editions
Sorry, there was a problem loading this page. Try again.

Most histories of Australia’s Great War rush their readers into the trenches. This history is very different. For the first time, it examines events closely, even hour-by-hour, in both Britain and Australia during the last days of peace in July–August 1914.

London’s choice for war was a very close-run thing. At the height of the diplomatic crisis leading to war, it looked very much like Britain would choose neutrality. Only very late in the evening of Tuesday 4 August did a small clique in the British cabinet finally engineer a declaration of war against Germany.

Meanwhile, Australia’s political leaders, deep in the throes of a federal election campaign, competed with each other in a love-of-empire auction. They leapt ahead of events in London. At the height of the diplomatic crisis, they offered to transfer the brand-new Royal Australian Navy to the British Admiralty. Most importantly, on Monday 3 August, an inner group of the Australian cabinet, egged on by the governor-general, offered an expeditionary force of 20,000 men, to serve anywhere, for any objective, under British command, and with the whole cost to be borne by Australia — some forty hours before the British cabinet made up its mind.

Australia’s leaders thereby lost the chance to set limits, to weigh objectives, or to insist upon consultation. They needlessly exposed Australian soldiers and their families to the full horror of the mechanised slaughter that was to come. They were hell-bent — and they got there.

"An original and disturbing account of the role of imperial manipulation and the connivance of Australian political leaders in the nation's premature leap into war. In a crowded historical field, Douglas Newton's attention to the political dimensions of Australia's (and Britain's) military commitment stands out. Meticulously researched and engagingly written, Hell-Bent highlights the dire logic of Australia's condition as a self-governing colonial dependency and the profound cost of the burden of empire." --Marilyn Lake, Professor in History and ARC Professorial Fellow at the University of Melbourne; President of the Australian Historical Association --This text refers to an alternate kindle_edition edition.

Douglas Newton is a retired academic, having taught European history at the Victoria University of Wellington, New Zealand, and at the University of Western. His special interests are peace and war in the period 1890-1919. He has published academic studies of the peace movement before 1914, the peacemaking of 1918-1919, and Germany in the period of Weimar and Nazism. --This text refers to an alternate kindle_edition edition.
Read more

3.1 out of 5 stars
3.1 out of 5
4 global ratings
How are ratings calculated?
To calculate the overall star rating and percentage breakdown by star, we don’t use a simple average. Instead, our system considers things like how recent a review is and if the reviewer bought the item on Amazon. It also analyses reviews to verify trustworthiness.

Geoffrey Pearson
4.0 out of 5 stars Fascinating Insight
Reviewed in Australia on 6 September 2018
Verified Purchase
If you really want to know how and why Australia plunged into WW1 so quickly, this is the book.We practically pushed Great Britain into the war. Why? An amazing analysis of the politics that leads to war, and the deaths of millions of people.
Read more
Helpful
Report abuse

David Gordon Terry
5.0 out of 5 stars An insight
Reviewed in Australia on 11 May 2017
This book gives a surprising view on how Australia caused an uncertain Britain to join the Great world war.Fascinating read!
Read more
Helpful
Report abuse
See all reviews

David S
1.0 out of 5 stars Not scholarly?
Reviewed in the United Kingdom on 16 December 2017
Verified Purchase
I brought this book as it was referenced in a journal that I was reading as part of an MA essay I was writing. I thought it would give a great new insight to the Australian war effort. However, there is no bibliography, ‘secondary material can be found in the end notes’. The red flag this raised was raised further when I read the conclusion. I know, crazy, start with the conclusion but that’s what us academic types might do. Really weak. Then, the opening. After reading the rubbish about Britain and the start of the war it was clear..... avoid. Maybe the author has some unique Australian insights. If so, they’re buried within. Anyway, i wasted my money.
Read more
Report abuse

David Gordon Terry
4.0 out of 5 stars Australia's role in Britain deciding to go to war
Reviewed in the United States on 10 July 2015
Verified Purchase
A surprising picture of Australia in different era when a perception of empire and colonial duty overrode any sense of national independence. A well researched book
I

Read more
One person found this helpful
Report abuse
See all reviews
Back to top
Get to Know Us
Make Money with Us
Let Us Help You
And don't forget:
© 1996-2022, Amazon.com, Inc. or its affiliates