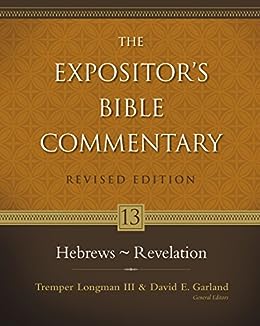 Continuing a Gold Medallion Award-winning legacy, this completely revised edition of The Expositor's Bible Commentary series puts world-class biblical scholarship in your hands. Based on the original twelve-volume set that has become a staple in college and seminary libraries and pastors' studies worldwide, this new thirteen-volume edition marshals the most current evangelical scholarship and resources. You'll find up-to-date information grounded in the same unchanging commitment to the divine inspiration, complete trustworthiness, and full authority of the Bible. Of the fifty-six contributors, thirty of them are new. Reflecting the Expositor's Bible Commentary international and cross-denominational approach, they come from the United States, Canada, England, Scotland, Australia, and New Zealand, and from a broad diversity of churches, including Anglican, Baptist, Brethren, Methodist, Nazarene, Presbyterian, and Reformed. The Expositor's Bible Commentary uses the complete New International Version for its English text, but it also refers freely to other translations and to the original languages. For each book of the Bible, the thoroughly revised features consist of: A comprehensive introduction A short and precise bibliography A detailed outline Insightful exposition of passages and verses Overviews of sections of Scripture to illumine the big picture Occasional reflections to give more detail on important issues Notes on textual questions and special problems, placed close to the text in question Transliteration and translation of Hebrew and Greek words, enabling readers to understand even the more technical notes A balanced and respectful approach toward marked differences of opinion --This text refers to the hardcover edition.

David E. Garland (PhD, Southern Baptist Theological Seminary) is William B. Hinson Professor of Christian Scriptures and dean for academic affairs at George W. Truett Seminary, Baylor University. He is the New Testament editor for the revised Expositor's Bible Commentary and the author of various books and commentaries, including Mark and Colossians/Philemon in the NIV Application Commentary, and the article on Mark in the Zondervan Illustrated Bible Backgrounds Commentary. He and his wife, Diana, reside in Waco, Texas.

The Reverend Dr. Dick France was a New Testament scholar and Aglican cleric. He was Principal of Wycliffe Hall Oxford from 1989 to 1995. He also worked for the London School of Theology.

George H. Guthrie (PhD, Southwestern Baptist Theological Seminary) serves as the Benjamin W. Perry Professor of Bible at Union University in Jackson, Tennessee. As a specialist in New Testament and Greek, he is the author of numerous articles and four books including the volume Hebrews in the NIV Application Commentary series.

4.7 out of 5 stars
4.7 out of 5
42 global ratings
How are ratings calculated?
To calculate the overall star rating and percentage breakdown by star, we don’t use a simple average. Instead, our system considers things like how recent a review is and if the reviewer bought the item on Amazon. It also analyses reviews to verify trustworthiness.

DR-J-J
3.0 out of 5 stars Good commentary series, disappointing revised edition
Reviewed in the United States on 14 September 2013
Verified Purchase
Let me state up front that I am rating this low for the revision (and the revised books within this complete commentary). The books that have basically remained the same, are still useful and the entire series should be considered by anyone seeking such a commentary.

The original (non-revised edition) had Leon Morris for Hebrews and Glen Barker for Epistels of John. In fact, the only author that remained the same in the revised edition is Alan Johnson's Revelation. Certain upgrades are a blessing, others seem less helpful.

Particularly unhelpful has been Thomas Thatcher's Johanine Epistles. His reboot is a complete recasting of the book. While Glen Barker's earlier edition was quite standard (seeing the troubling passages of John's epistle as tests of faith (So, for Barker, the christian will not "continue in sin" if he is a true Christian... quite often the pastoral plea in relation to first John, following the NIV translation).

Thatcher takes a different path to removing seeming contraditions in First John. He sees "Be righteous as He is Righteous" to mean "Be loving as He is loving." He sees, "No one who is born of God sins" as meaning, No one who is a Christian hates.

For Thatcher... limiting sinning to meaning "hating" and limiting righteousness to "be loving" means that the Gospel of love is being reaffirmed. Perhaps. But the Gospel and love are not to be equated, since Love is a work... and definately difficult to pull off. In fact, I dare say that loving others is about the hardest of all commands. SO if the Gospel and "being loving" are the same thing, then I am sunk. Most people, I dare say, are outside of this Gospel of love. In fact, I only know one who makes the cut.

This theological problem continues through his whole commentary, so it makes it of very little use. I don't know why he would try to maintain that the only commandment that John really cares about is LOVE. Obviously, love is crucial to the book, but it isn't the same as the Gospel of Grace.

I find this update to the Johanine Epistles is less than helpful. You may find other volumes that make this commentary a good buy... but First John was especially weak in this series.
Read more
22 people found this helpful
Report abuse

Charles F. Robison
5.0 out of 5 stars An Excellent Resource
Reviewed in the United States on 15 March 2013
Verified Purchase
The emphasis on overviews and verse by verse commentaries make this an outstanding addition to any Bible student's library. I can see myself getting the entire series in the near future. Not having a working knowledge of Greek limits my ability to extract the full benefit to be derived from the many excellent technical commentaries now available....a limit that, at 74, I don't realistically see myself addressing. In any event, this is a commentary that deserves the most serious attention.
Read more
4 people found this helpful
Report abuse

Father Thomas Reeves
4.0 out of 5 stars Four Stars
Reviewed in the United States on 6 September 2015
Verified Purchase
Bought it for Hebrews with R.T. France
Read more
2 people found this helpful
Report abuse
See all reviews
Back to top
Get to Know Us
Make Money with Us
Let Us Help You
And don't forget:
© 1996-2021, Amazon.com, Inc. or its affiliates