Heaven's Edge and over 1.5 million other books are available for Amazon Kindle . Learn more
Share <Embed> 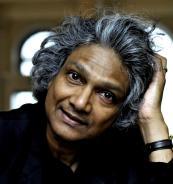 Releases March 2, 2021. Pre-order Beyond Order: 12 More Rules for Life now with Pre-order Price Guarantee.
If the Amazon.com.au price decreases between your order time and the end of the day of the release date, you'll receive the lowest price. Order now
click to open popover
Start reading Heaven's Edge on your Kindle in under a minute.

Romesh Gunesekera grew up in Sri Lanka and now lives in London. His debut novel Reef was shortlisted for the Booker Prize and the Guardian Fiction Prize in 1994 and won the Yorkshire Post First Work Prize. In 1997 he was awarded the prestigious Premio Mondello award in Italy. He was elected a Fellow of the Royal Society of Literature in 2004. He is the author of numerous novels and short story collections, including Monkfish Moon, Reef, The Sandglass and Noontide Toll, all of which are published by Granta Books.

Sena
5.0 out of 5 stars A serious work of magical realism - Not for escapists
Reviewed in the United Kingdom on 4 July 2013
Verified Purchase
If you are someone who believes the tourist cliches about Sri Lanka being a paradise this book is not for you. The story is set on an unnamed island which could perhaps be Sri Lanka but is probably not. I call this a book of magical realism because Gunesekera has brilliantly imagined a post-apocalyptic landscape where the truth is hard to find. The narrator is a young man named Marc, born in Britain of parents who had emigrated from the island. Both parents died when Marc was a child and he is brought up by his grandparents. His grandmother gave him a background of "solid" reality, "making pancakes and baking him banana bread or ginger cake every Sunday". After his grandparents also die, Marc is left without moorings. He comes across an old video cassette in which his father had recorded his experiences on the island where he mysteriously died. Marc feels impelled to travel to the island to find himself, his "soul". On the island Marc finds that nothing is what it seems. He meets a girl named Uva who accompanies him on a series of adventures which easily hold the reader's interest.
Read more
One person found this helpful
Report abuse
See all reviews
Get FREE delivery with Amazon Prime
Prime members enjoy FREE Delivery and exclusive access to movies, TV shows, music, Kindle e-books, Twitch Prime, and more.
> Get Started
Back to top
Get to Know Us
Make Money with Us
Let Us Help You
And don't forget:
© 1996-2020, Amazon.com, Inc. or its affiliates