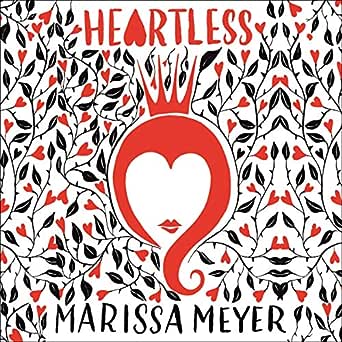 Jacinta
5.0 out of 5 stars Magnificent wordplay
8 July 2019
Format: PaperbackVerified Purchase
This book took everything I loved about Alice and gave me more to love. The characters are so vivid and the story had me captivated from the beginning. For a slow and reluctant reader, Heartless is a great gateway back into finding ones passion for reading. It's easy to read, digest and love.
Read more
Helpful
Comment Report abuse

Tomato
5.0 out of 5 stars Couldn't put it down
16 October 2019
Format: Kindle EditionVerified Purchase
This book was beautiful and heartbreaking at the exact same time.
It took everything i loved and put it into this story.
This is a story of love, sacrifice, suspension and heartbreak.
This is the best rendition of the story of the Queen Of Hearts ever.

Angelia Katsianos
4.0 out of 5 stars Wonderful
11 November 2016
Format: Kindle EditionVerified Purchase
Marissa Meyer knows how to entertain the reader.
She is an expert at crafting characters that you care about, that you wish were real, that invade your thoughts.

MyBooksAreMe
5.0 out of 5 stars Fall Down The Heartbreaking Rabbit Hole
17 February 2019
Format: Kindle Edition
I was kindly sent a copy of this book from Pan Macmillan Australia in exchange for an honest review. All opinions are my own.
Return to the magic of Wonderland with this beautiful and heartbreaking origin story for the infamous Queen of Hearts, before she was shouting "Off With Their Heads!"

As the daughter of a Marquee, Catherine's dreams of opening a bakery with her maid and friend seem just that, dreams. But Catherine is determined to turn her passion and hobby into a career. However, with the King of Hearts showing favour to Catherine, her mother has different plans for her. She wants Catherine to be Queen, no matter how Catherine actually feels about it all. All she wants is to bake. But all that changes when the new Joker, Jest, arrives in Hearts. Now all she wants is to bake and fall in love on her own terms. But being the daughter of a Marquee means she can't have what her heart wants. With a Jabberwocky threatening the kingdom, a King determined to marry her, and a Joker with her heart, Catherine's world could come crashing down at any moment with whatever decisions she makes. But, as we all know, something happens to Catherine that makes her heartless.

This was not only the first Marissa Meyer book that I've read, but also my first Alice in Wonderland retelling/origin story. I love being in Wonderland, and Marissa captured the magical and mysterious essence of Lewis Carroll's world so well. While it took me about 50 pages to get into the story because of it's initial slow pace and world building, I was soon down the rabbit hole not wanting to leave.

When I read Alice In Wonderland, I felt like Lewis Carroll was completely mad when he wrote it - the story was great, but his writing style was confusing and jumpy at times. With Heartless it was so easy to immerse myself into the world. The way Marissa describe everything was beautiful and I'd love to see her write more about Wonderland. The book was so easy to read and to vividly imagine the wondrous world of Wonderland.

While I've never thought of the Queen of Hearts as a true villain in Alice's story, I so desperately wanted this story to have a happy ending. We know how the Queen turns but, so obviously something had to happen to cause her to become 'heartless'. But throughout the entire book I forgot that I was reading about the future Queen of Hearts who is always threatening to chop people's heads off. I loved what Marissa did with this story, despite the inevitable ending. I was heartbroken, but it's the way the story is meant to go.

Being one of my most anticipated releases for 2016, Heartless certainly lived up to my expectations. It also lived up to the hype surrounding Marissa Meyer. I didn't want this story to end and I was definitely not ready to leave Wonderland at the end. If you love the original story and are fascinated by the Queen of Hearts, you'll definitely enjoy the spin that Marissa put on her story. I'm definitely interested now to pursue some more origin stories for the Queen of Hearts.

Get ready to escape into the magical world of Wonderland and not only learn about the infamous Queen of Hearts, but also meet some of our favourite Wonderland characters before Alice fell down the rabbit hole.

Cloggie Downunder
TOP 50 REVIEWER
5.0 out of 5 stars a brilliant read
30 January 2017
Format: Kindle Edition
Heartless is the first stand-alone fantasy novel by American author, Marissa Meyer. Lady Catherine Pinkerton, daughter of the Marquess of Rock Turtle Cove, has one fervent desire: to open her own bakery in the Main Street of the Kingdom of Hearts. But her ambitious mother has other ideas. Determined that her daughter will draw the King’s attention, the Marchioness ensures that Cath is the only one dressed in red at the King’s Black and White Ball. And this is where Cath meets the man of her dreams (literally), but it’s not the King.

Every good story needs a character to despise, but did you ever wonder how the Queen of Hearts in Lewis Carroll’s Alice’s Adventures In Wonderland got to be so imperious, so cranky, so very despicable? Marissa Meyer has given us her story. And what a tale it is! This prequel has all the essential Alice elements: the Cheshire Cat, the Mad Hatter, the White Rabbit, the March Hare, the King of Hearts, the Mock Turtle, the dreaded Jabberwock, as well as borrowing from other fiction and introducing brand new characters.

Meyer gives the reader an ingenious plot with a few twists and an exciting climax. There is plenty of humour which takes the form of witty dialogue, a good dose of irony, a generous helping of puns and lots of other word play, including clever rhymes. There’s magic and an abundance of echoes of the original Alice. And there are moments that will cause a lump in the throat and maybe even a tear or two. This is a brilliant read and readers will wonder to what Meyer will turn her considerable talents next. Recommended.
Read more
Helpful
Comment Report abuse
See all 10 customer reviews
Write a customer review
Get FREE delivery with Amazon Prime
Prime members enjoy FREE Delivery and exclusive access to movies, TV shows, music, Kindle e-books, Twitch Prime, and more.
> Get Started
Back to top
Get to Know Us
Make Money with Us
Let Us Help You
And don't forget:
© 1996-2020, Amazon.com, Inc. or its affiliates