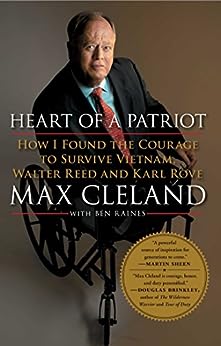 Heart of a Patriot: How I Found the Courage to Survive Vietnam, Walter Reed and Karl Rove Kindle Edition

“The book is crisply written . . . Cleland and Ben Raines have produced an emotional and provoking book that fits his remarkable story into the broader context of the state of American politics since World War II. It is oftentimes uncomfortable, but always compelling.”
—Scotty E. Kirkland, The Mobile Press-Register (Alabama)

“Filled with bravery on many fronts and perseverance in life.”
—New Pittsburgh Courier

“A true profile in courage for our time.”
—Senator Ted Kennedy

“Deeply moving and uplifting . . . Cleland is as big a man as you’ll ever meet.”
—Jon Land, Providence Journal-Bulletin (Rhode Island)

“A powerful testament to one veteran’s struggles and successes… A classic American triumph.”
—Roll Call

Max Cleland is a Vietnam War veteran and former U.S. Senator from Georgia who has served as the head of the Veterans Administration and on the 9/11 Commission. He became Secretary of the American Battle Monuments Commission in 2009.

Ben Raines is an award-winning environmental journalist, filmmaker, and charter captain. He lives with his wife in Fairhope, Alabama. --This text refers to an alternate kindle_edition edition.

Kelly
5.0 out of 5 stars Superb Biography
Reviewed in the United States on 16 February 2014
Verified Purchase
I was required to choose a book on a Georgia politician for my Political Science class in college. I happened to pick this book out of a list given to me by professor because it looked to be one of the newer books listed. It was the greatest decision ever.

I read this book more for pleasure than for my class assignment. I couldn't put it down! Cleland is so honest with his audience and it's such a refreshing read. I loved every minute of it and I recommend it!
Read more
2 people found this helpful
Report abuse

Michelle Ridgeway
5.0 out of 5 stars A Must Read - A Story of a True American Hero
Reviewed in the United States on 17 May 2013
Verified Purchase
This book demonstrates how a man that has dedicated his life to service for this country, both in the Military and in Government, only to find his service dismissed and his reputation damaged by the Right Wing fascists of the wantabes in Government. Their desire was not to Service this county but to Rape and Pillage it.

His sacrifice in Vietnam dismissed as if losing both legs and his right arm were not enough, by the likes of Carl Rove and Saxby Chameless (Shameless) dismissed that sacrifice and called him a coward.

I cried until I could not cry anymore. I cried for Max and this country.
Read more
3 people found this helpful
Report abuse

Andrew Frennier
5.0 out of 5 stars An American Life
Reviewed in the United States on 2 February 2010
Verified Purchase
I would like to start this review by stating that Max Cleland is a friend, and I will give a very honest review of his book. Max would not like anything else. I gave it the stars I did because it is a very frank and open discussion of his life, written in a style that reads as if the reader and author were sitting down to a long conversation in a small Georgia diner. He not only discusses his successes, but does not gloss over his personal failures and periods of severe depression. Max does not do this to gain your sympathy, but so others can see that they too can overcome their personal traumas. One reviewer called him a crybaby. Max frankly admits that he did cry for almost 2 1/2 years after his reelection defeat in 2002. I have seen men cry on the battlefield, and there is no dishonor in admitting it.
It is an informative, enjoyable, and personal read.

As a friend, I would like to address some of the points mentioned by others. First, military crediblity. There are lots of people who say that one who has never served is not allowed to have an opinion on some war or another. Amazon is full of reviews written by just these people. Max would not agree, and I don't either. Perhaps it is in a part of the Constitution I missed. Be that as it may, we will use their standard and review Max's record. Max Cleland volunteered for the Army (not drafted), volunteered for service in Vietnam (against the wishes of his superiors), and volunteered for combat duty before returning home (again, against the wishes of his commanders). In a handful of days, he had earned a Bronze Star, Silver Star, and a Soldier's Medal. If you don't recognize that last one, look it up. It ranks above the Bronze Star on your ribbon bar. He lost three limbs in the defense of Khe Sahn, to a US hand grenade. There are pleny of jobs in the military where someone can serve for years without ever seeing foreign soil. Also, lots of REMFs have jobs in a war zone without real danger of seeing an enemy. Max did not want to be one of those. He showed his personal heroism and almost died.

Max Cleland was friends with people such as Jimmy Carter and Bill Clinton before they appeared on the national stage. Would it surprise anyone that he is a life long Democrat?

Finally, if you do not think that Max Cleland got a bad deal from the Republicans in his 2002 relection bid, perhaps you should fisrt give John McCain a call, since he campagined on Max's behalf in protest against his own party.

Max Cleland has devoted his life to public service. For over thirty years, he blamed himself for dropping that grenade, only to discover that it was not his. Several Americans are alive because he bent over. I feel honored to have Max Cleland as a friend, and I hope that you will discover why in his book.
Read more
2 people found this helpful
Report abuse

E. H. Moore
5.0 out of 5 stars The Real Max Cleland
Reviewed in the United States on 26 November 2009
Verified Purchase
I first met Max Cleland in Washington around 1978 when he was Administrator of Veterans' Affairs. While we often saw each other through various events over the next year, Max never completely opened up about his experiences in Vietnam or about his treatment at Walter Reed. What Max did say was that he loved his country though others -- including his fiancee -- forgot their love of him. Max has spent the majority of his life helping improve the lives of others while ignoring his own needs. Whether volunteering to fight an unnecessary war, eating sandwiches with his mother, saving prospective suicidal soldiers, or admitting his own OCD and PTSD, Max has always been honest with others -- and this book is no different. If healing took a print version of Max's life, then so be it. As for me, I continue to use Max Cleland as an example for my high school students 30 years later, and I guarantee excerpts of his book will be shared from now on. Set political agendas aside, and you will see the story of a soldier who has taken years to admit his fears, his needs, and his weaknesses. Maybe one day I can get my copy autographed.
Read more
4 people found this helpful
Report abuse

DAVID PHILLIPS
5.0 out of 5 stars DESPITE SOME RE-CYCLED MATERIAL FROM TWO EARLIER BOOKS, the "MAX CLELAND story" bears repeating today!
Reviewed in the United States on 11 November 2009
Verified Purchase
The Karl Rove generation was initially pandered to by Reagan-nauts, eager to have clones as their legacy it seems. Where Rove got rich consulting on political mis-deeds, however well funded by Texas deep pockets, MAX CONTINUES TO STAND FAR TALLER - in statureand values - than Rove shall ever know or achieve as a Fox News contributor today!

YET Max and OUR GENERATION who served honorably in military uniform overseas during the protracted Vietnam, Laos and Cambodia wars have not always come to grips with the changes we found on our "home-coming" to the country of our birth we had left just a few years previous.

REMINDER # One = Five (5) U. S. Presidents prosecuted and conducted 'our' Vietnam, Laos nd Cambodia Wars! All of those presidents were WW-II veterans! They stll call themselves "America's Greatest Generation"!

In many cases, then as now = "America, we still don't know you anymore"!

Max Cleland's latest book helps fill that void many of us still feel - as health care providers to fellow veterans, confidants, case managers, counselors and even outreach workers for our homeless veteran brothers and sisters still on the streets.

REMINDER # Two = Without Max's sigificant, national leadership as VA Secretary the "store-front vet centers" would never have been realized and still operating today - even for those still returning from Kuwait, Iraq, Afghanistan and other South Asia or Middle Eastern venues or combat zones.

Whereas the current VA Secretary has set a "five-year goal" to eradicate veteran homelessness - he would do well to read then heed the public VA papers and three (3) books of Max Cleland, his far-seeing predecessor.

MAX, may of us out here still remember and we still salute ya == anytime you "shoot basketball hoops" anywhere! ;-)
Read more
9 people found this helpful
Report abuse
See all reviews
Back to top
Get to Know Us
Make Money with Us
Let Us Help You
And don't forget:
© 1996-2021, Amazon.com, Inc. or its affiliates