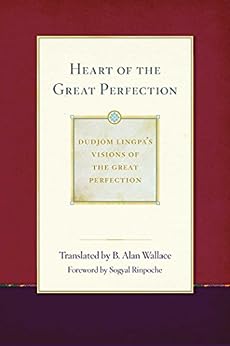 "Superb...we are indebted to Wallace, and to those who inspired and assisted him, for providing us with such a rich and vital resource for coming to terms with the profundities and puzzles of the Great Perfection."-- "Buddhadharma" --This text refers to an alternate kindle_edition edition.

Dynamic lecturer, progressive scholar, and one of the most prolific writers and translators of Tibetan Buddhism in the West, B. Alan Wallace continually seeks innovative ways to integrate Buddhist contemplative practices with Western science to advance the study of the mind. A scholar and practitioner of Buddhism since 1970, Dr. Wallace has taught Buddhist theory and meditation worldwide since 1976. Having devoted fourteen years to training as a Tibetan Buddhist monk, ordained by H. H. the Dalai Lama, he went on to earn an undergraduate degree in physics and the philosophy of science at Amherst College and a doctorate in religious studies at Stanford. He is the founder and president of the Santa Barbara Institute for Consciousness Studies. He is the author of Stilling the Mind and The Attention Revolution. Wallace lives in Santa Barbara, CA. --This text refers to an alternate kindle_edition edition.

4.8 out of 5 stars
4.8 out of 5
29 global ratings
How are ratings calculated?
To calculate the overall star rating and percentage breakdown by star, we don’t use a simple average. Instead, our system considers things like how recent a review is and if the reviewer bought the item on Amazon. It also analyses reviews to verify trustworthiness.

jonah whale
1.0 out of 5 stars Unreadable font
Reviewed in the United Kingdom on 20 March 2019
Verified Purchase
Amazing dharma from an incredible yogi. MOST unfortunate is the editors have decided to make bold the root text whenever it's mentioned. I waited a long time for this book and I can't read it. It's painstaking to read a page as highlighting in bold half the sentence EVERY sentence profoundly changes the meaning. We as English speakers are trained in English. In English making something BOLD changes its emphasis and meaning. But not only that, it's unpleasant to read a sentence when half of it is in bold. It's weird and wrong and unreadable.
This is the most frustrating book I've ever bought in my entire life.
The cover is beautiful. The layout is perfect. The dharma in it is unspeakably brilliant and I can't read it because of the editors. We can only pray they release the book in a normal format that all other books in the history of the English speaking world have so far chosen to use?
Read more
Report abuse

Paul Rohe
5.0 out of 5 stars Astounding.
Reviewed in the United Kingdom on 29 July 2016
Verified Purchase
Well, if you have information on shamatha and vipashyana then this three volume set will be all you need to fulfill both yourself and others happiness...By the way, if you pop along to the internetachive (google it) and do a search for Alan Wallace you can find free teachings for download or listening, and they are some of the best you will find on meditation. Of the hundreds of Buddhist books I have these are some of the most prized.

Thank you Alan Wallace for these Translations and your teachings.

No people, I have never met Mr. Wallace and probably never will do though I do recognize a Master of Buddhist teachings when I see one and Mr. Wallace is such though he would probably never say that.
Read more
2 people found this helpful
Report abuse

HAMARA
5.0 out of 5 stars Great
Reviewed in India on 26 May 2019
Verified Purchase
One of the original text
Read more
Report abuse

Book Drawn
5.0 out of 5 stars Ready to Put Your Toe into the Deepest Water?
Reviewed in the United States on 17 June 2016
Verified Purchase
For those unfamiliar with Dudjom Lingpa or the Tibetan to English translations of Alan Wallace there can be no better place to put your toes into the waters of the Buddhism Dzogchen tradition. This text is a paperback edition of the first volume of a three volume hardcover translation soon available through Amazon as Dudjom Lingpa’s Vision of the Great Perfection. This single volume contains four works, including The Foolish Dharma of an Idiot Clothed in Mud and Feathers about which Mr. Wallace did a multi-year retreat series in Santa Barbara, California. That seems indicative of its depth and the high regard Mr. Wallace holds for it.

Forward and Preface add 30 pages to the already lengthy 303 page text, but don’t skip them if you want to get the lay of the land. The same can be said for the Introduction. The introduction describes the life story of Dudjom Lingpa and the lineage that followed him.

When we reach the first of the translations, we have been prepared to expect the extraordinary and there is no disappointment in “The Sharp Vajra of Conscious Awareness Tantra.” Separate commentaries to a master’s teachings are common with Tibetan texts and that is what occurs next. The commentary called “Essence of Clear Meaning” was recorded by Dudjom Lingpa’s disciple Pema Tashi. It may be that you will want to skip to the commentary, then go back to enjoy the original text. This first commentary alone is worth the price of admittance. Phase Five (page 89) on determining dualistic grasping and revealing the way to natural liberation is brilliant.

The next section is “The Foolish Dharma of an Idiot Clothed in Mud and Feathers.” As previously mentioned it was the subject of several retreats over a course of years. Though short, its analysis of reality is exceptional and certainly not the work of an idiot as the self-deprecating title might suggest. The Foolish Dharma is followed by the extremely challenging “The Enlightened View of Samantabhadra,” last save a lengthy and excellent Glossary. Reading it feels a little like one might imagine the climb up Mount Everest.

This is certainly no place for a beginner to start his journey along the Buddhist path. In fact Dzogchen is considered the pinnacle, and traditionally many works have been considered secret, to be taught only when the teacher considers the pupil ready. Traditionally this was after years of study and meditation. Some would say the teachings are self- secret, unclear until the student is ready. There are also those who consider them dangerously confusing if read without direction. Perhaps a course of action would be to purchase the book, begin reading, and then decide if it’s the time to tackle the entire text. If not put it close by and return periodically to it as you progress along the path. Or maybe you’re that rare practitioner who instantly awakens. In any case you will be left in awe of the poetic beauty of the writing in this translation.
Read more
43 people found this helpful
Report abuse
See all reviews
Back to top
Get to Know Us
Make Money with Us
Let Us Help You
And don't forget:
© 1996-2021, Amazon.com, Inc. or its affiliates