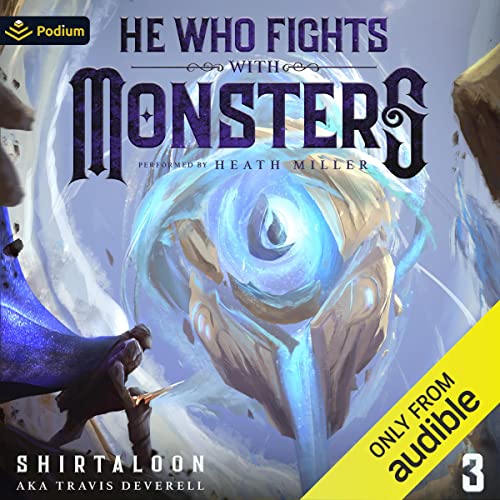 For all that Jason knows, life is amazing. But he's about to learn that all his new power, wealth, and influence comes at a price.

Riding high on success, he and his team are looking to the future, preparing themselves for the challenges to come. Nothing, however, could have prepared him for the lessons his enemies have to teach. When magic is involved, the stakes can be even greater than life and death.

While Jason’s personal enemies make plans, the greater foes plaguing his new home have been pushed to the brink. With one powerful card left to play, they are on a collision course with Jason and his team. With no one to help and more than their lives on the line, Jason and his companions must fight with more monsters than ever in the race to grow stronger. With an invincible enemy already anticipating them, they will learn that sometimes winning the battle is more important than surviving it.

4.6 out of 5 stars
4.6 out of 5
521 global ratings
How are ratings calculated?
To calculate the overall star rating and percentage breakdown by star, we don’t use a simple average. Instead, our system considers things like how recent a review is and if the reviewer bought the item on Amazon. It also analyses reviews to verify trustworthiness.

Adam
4.0 out of 5 stars Still good but missing stuff.
Reviewed in Australia on 8 September 2021
Verified Purchase
Let me start by saying yes its still good but to me it was missing that spark the first two books had. The main character didnt have flare that disregard for social structure and sarcastic insanity that he was known for. Lastly the ending just went far out of bounds with random new chacters being briefly introduced and the big bad being a petulant child. In the previous books the big bad had been sneaky and clever why now is it an idiot?

After this small rant it was still good just not good enough for a higher score. Im still waiting eagerly for book 4 just bring back my insane sarcastic main character.
Read more
One person found this helpful
Helpful
Report abuse

Alan K
TOP 1000 REVIEWER
5.0 out of 5 stars great story, and becoming an epic tale
Reviewed in Australia on 24 October 2021
Verified Purchase
Still love the wordplay, but things get more serious, and in that seriousness I think some of the joy in reading the first two books is lost. The chapter’s without the MC seemed to drag on, like a vehicle waiting for its driver to return. The ending of this book has me concerned about the characters that have made me laugh and cry and how we might return to the fun banter between them rather than a future where these friend look to be scattered. Well I must try reading book 4 and see where the author takes us. I hope it’s in a direction where I enjoy these characters again.
Read more
Helpful
Report abuse

J.C. O'Connor
TOP 500 REVIEWER
5.0 out of 5 stars Great series
Reviewed in Australia on 9 September 2021
Verified Purchase
And not just because the author is an Aussie. The series has some of the aspects that are quite common to web novels in that it doesn't follow the normal novel formats although it isn't as bad with this series as it is with many others. I follow the author on Patreon and am rooting for Jason all the time. Stick with it the series gets better with time.
Read more
Helpful
Report abuse

Amazon Customer
TOP 500 REVIEWER
4.0 out of 5 stars Lots of detail
Reviewed in Australia on 15 September 2021
Verified Purchase
I really enjoy this series although this instalment was focused on a single storyline whereas previous books were more diverse. This lost some of the charm I felt for some of the previous stories although I am still well engaged.
Read more
Helpful
Report abuse

Kindle Customer
4.0 out of 5 stars Good
Reviewed in Australia on 6 November 2021
Verified Purchase
In general a fairly good read. It was lacking stat's in the last book which is a pity but hopefully we can get some back in the upcoming books. I am looking forward to the next book in the series.
Read more
Helpful
Report abuse

James
5.0 out of 5 stars Fantastic series
Reviewed in Australia on 15 September 2021
Verified Purchase
Another well crafted entry to the series and I can't wait for the next one. Some editing hiccups still persist but nothing that detracts from a bit of quality escapism.
Read more
Helpful
Report abuse

Kinddle App User
5.0 out of 5 stars Need the next one
Reviewed in Australia on 13 September 2021
Verified Purchase
Great book. Interesting universe. Some of the combat could have used footnotes instead of listing the powers all the time. Very interested in the next one.
Read more
Helpful
Report abuse
See all reviews

Nevextra
4.0 out of 5 stars Solid Trilogy with a rushed continuation added on
Reviewed in the United Kingdom on 12 September 2021
Verified Purchase
This trilogy is solid main characters whose journey from the first book to this third instalment perfectly depict a heroes journey and ended bittersweetly.

It would have been a good story.

However the 8, yes 8 epilogue chapters more than half of which concern new characters talking about new plot points smacks clearly of the author having scrabbled together a continuation to the series and needing to just justify it with rushed work like this. It all reeks of an author not wanting to let go of a cash cow that's going to devolve into a litrpg in the modern world apocalypse book.

The whole situation where some new woman is going to be introduced and given super skills by six of the great astral being in the next book because the mc had the audacity to die fighting one of them and The Reaper is throwing a hissy fit over the mc reviving using The World Phoenix token he was given at the beginning of the first book it all reads like a literal metaphor for "Move over male you failed, now its time for super serious badass action lady literally blessed by godlike entities to fix all the mistakes"

A man is more than just a sleeve you don't just switch out your MC and you sure as hell don't do it by shitting on everything you have built up until now.
Read more
4 people found this helpful
Report abuse

Martin Leib
5.0 out of 5 stars Fantastic story and marred a bit by poor grammar and editing
Reviewed in the United Kingdom on 13 September 2021
Verified Purchase
Love the series and the great story evolution. Not just the boring base/world building eventually but a real intricate and engaging story.
Deep on a personal level: accepting and controlling the monster inside, speaking your own truth and burning away the parts of you that does not serve.
Please let me proof read the next as there were too many errors that jarred the fantastic flow of the story.
Read more
2 people found this helpful
Report abuse

Gazzmann
4.0 out of 5 stars A great continuation
Reviewed in the United Kingdom on 9 September 2021
Verified Purchase
I'm loving the characters and story more each book and cannot wait to see what happens next. There are some mistakes here and there but they are just bumps in the road of a good story. Cheers!
Read more
3 people found this helpful
Report abuse

Kindle Customer
5.0 out of 5 stars Fun, thrilling, insightful, and so very anarchically Aussie
Reviewed in the United Kingdom on 13 September 2021
Verified Purchase
To start with this book would get 6 stars, but the quality of the proof reading and editing is so God-awful that in some places it took a huge effort to figure out what a passage should say, rather than the word salad that a couple of spelling mistakes and autocorrect ions made it.
That aside, Shirtaloon has produced another fantastic volume, full of human moments and realistic motivations, humour, and characters this reader just cannot avoid caring about.
Read more
Report abuse

Jake
4.0 out of 5 stars Good but not great
Reviewed in the United Kingdom on 18 September 2021
Verified Purchase
The previous books were brilliant however I found this one lacking in areas, I could get past the typo's and grammatical errors, however some potentially interesting battles were skipped or glazed over, skill and ability descriptions were far too numerous and the book as a whole seemed rushed and lacking the immersion of the previous two, on a whole though the series has been great so far and I hope the next book redeems the previous qualities of the series, also I hope Jason proves to be his old sarcastic and challenging self as in this book his character seems a lot more flat than the others.
Read more
One person found this helpful
Report abuse
See all reviews
Back to top
Get to Know Us
Make Money with Us
Let Us Help You
And don't forget:
© 1996-2021, Amazon.com, Inc. or its affiliates