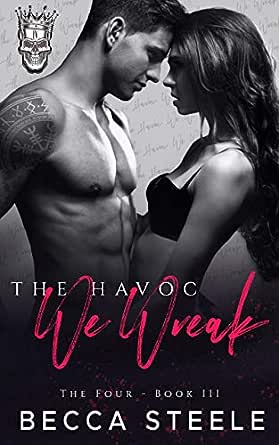 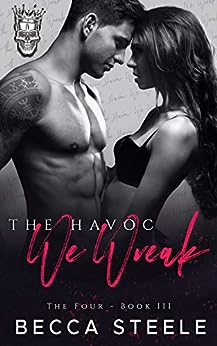 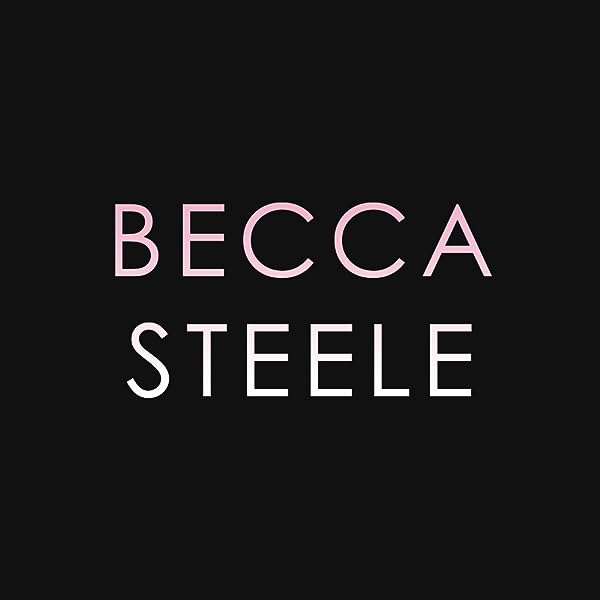 The Havoc We Wreak: An Enemies to Lovers College Bully Romance (The Four Book 3) Kindle Edition

Sid
5.0 out of 5 stars Secrets Unearthed, Truths Revealed... The Epic Conclusion.
Reviewed in Australia on 2 August 2020
Verified Purchase
Well, what a journey it has been...
Becca, you sure know how to write a series that keeps us on edge, frustrated and just wanting more.
I have never hated seeing the words "To be continued..." as much as I did than when I saw them at the end of each of the other 2 books in The Four's series 😂
The world you created in The Lies We Tell sucked me into the realm of Winter and The Four - I was invested right from the start - secrets, lies, betrayal and an ending that left me gasping for breath!
The ride continued on in The Secrets We Hide - suspense, twists, turns, more questions than answers and another ending that left me screaming 'WHAT THE?... WHO?... WHY?!?'

And it all concluded in the epic finale, The Havoc We Wreak.

Winter has always been a brave character and doesn't shy away from danger - her arriving at Alstone with the sole purpose of seeking out the truth about her father's death, proves that. She's loyal, strong and determined throughout the series. No matter what roadblock is thrown her way, she stays focused and doesn't deviate from her mission at hand. She's a loving and caring character, her friendships with smaller characters as well as the other members of The Four shows that she can crack through the frostiest of exteriors and the strongest of bonds.

Caiden, well we finally see the man behind the mask in THWW - and love definitely looks good on him. We got the broody, mysterious, head strong alpha, who was at times an absolute a**hole, throughout the first 2 books - and don't get me wrong, he still might be those things, but THWW brings out... The Hero.
We watch as his character throughout the series grows from an angry boy, to an honourable man.

W & C's journey was definitely not smooth sailing, but their connection and chemistry was present right from the very start. Their passion and steamy moments were, whoa.. let's just say you will not be disappointed - they're hot, hot, HOT!! But what got me was their intimate moments; where their words to eachother or the small (& grand) gestures of love were what solidified their bond.
And let me tell you - Cade, the strong, emotionless leader, yeah... He knows how to do romance.

The secondary characters play an important part in this series, and I absolutely LOVE that fact! There's enough of them mentioned throughout each book that it leaves me super curious, definitely intrigued and desperately wanting to know so much more. And the questions Becca leaves unanswered about each of the other members of The Four has me adding their future books to my TBR and signing up to all of Becca's social platforms so I know I won't miss out on any announcements! It also has me praying to God that he gives me the strength to be patient 😉

As much as I hate that the story of Winter & Caiden has come to an end, it's a bittersweet moment as I'm unbelievably excited for the journey Weston, Zayde and Cassius will be taking me on!

The Havoc We Wreck is Book Three in the Four Series. To fully grasp the concept of this story, you need to read the other books in this story.

Holy Crap, the FINALE is finally here.
After that cliffhanger in book two, I just needed to know who was the booted person at the docks.

From the moment that I started this series I was absolutely hooked, it grasped my attention from the get go. It was like I ventured down a rabbit hole with no escape of coming up. Not that I wanted to anyway. This book, screw that this series had me feeling all sorts of crazy, feeling all sorts of emotions deep inside. I felt like I was walking along side these characters through their journey, through their story.

This series I felt like I was my very own detective, highlighting all the secrets and answers so at the end I could piece together what really happened.
Even at the end, I was still shocked by all the revelations.

Just everything about this series had called to everything that I look for in my books. It had the suspense, the angst, secrets, lies, enemies to lovers vibes, brotherhood, sisterhood, dysfunction families, secondary characters that had you rooting for to get their own books but deep down it had an emotionally, painful story to it.

This is the Conclusion to Winter and Cade’s story.

Book One: Starting over after my father’s sudden death was bad enough, but the four boys who rule Alstone College, my new university, are determined to make my life even more difficult. One in particular. Caiden Cavendish.
My nightmare. My shadow. My stepbrother.

Book Two: Caiden Cavendish is under my skin. The Four have switched from being my enemies to my closest friends.
But not everything has changed. Two truths remain...my life is still in danger, and my mother is hiding something.
So many questions, and no answers.
What secrets lie buried in Alstone?

Book Three: Secrets and lies are being revealed. Loyalties are being tested, and betrayal cuts deep.
My mother needs to be stopped, but at what cost?
At the end, who will be left standing? And...
Who
Will
Fall…

Eeny, meeny, miny, mo.
You underestimated the Four and Snow.
You thought you were on a winning streak.
But are you prepared for the havoc we wreak?

I don’t want to go to much into the detail of the books, this book as I want you all to be able to experience these books, and this book for yourselves.

After revelations of why Winter was actually in town. The boys and Winter embarked on an adventure of figuring out the pieces of the puzzle and developing close bonds, relationships, love and most of all a family.

This is a book where all the mystery and all the secrets unfold and reveal all the answers that we have been desperately wanting to know from book one and two.

Friendships are further cemented, pieces of the puzzle finally fall into place and all of the action unfolds in the most heart stopping way.

Although I am still left with some questions regarding the secondary characters which I feel will be revealed in their books.

The heat between winter and Caiden is still as hot as ever. I loved seeing Caiden and Winter really grow into their relationship even while their was havoc to play. Their relationship has been rocky from the start. Caiden really took me by surprise with this book and really showed off how much he is in love with Winter and the things he will do to protect her. He really made me swoon and fall further in love with him.

From the moment these two met, you could feel that their was this undeniable strong connection but with all the hate that was brewing which soon turned into lust, like and now love. Their love made my heart feel all sorts of things. These are two people that you know belong to each other.

The action is next level and while The Four's plan seems to be coming together at long last, some major twists are thrown their way that change everything. These twists I didn’t expect, it was All the little things that get missed, that when the answers start coming through you can see how they fitted in!

It’s such a bittersweet moment that this series is over! It makes me want to cry but also jump for joy because they can finally rest at ease. It’s all over now and it’s now the start of Winter and Caiden’s relationship.

This author has a way of you eating out of her palm and gobbling up all her words. She has a way of you feeling all sorts of emotions especially everything that these characters went through with their crazy journey.

If you haven’t read this series yet, then what are you waiting for. This is a series that you need to get on board with.
Read more
One person found this helpful
Helpful
Comment Report abuse

Brenda Hawkins
TOP 1000 REVIEWER
5.0 out of 5 stars The Havoc Becca reaped
Reviewed in Australia on 2 August 2020
Well what a complete spin out Christine Winter’s mum ended up being. Becca you had me trying not to put this book down in a hectic week for myself.
Throughout THWW you could never doubt the intensity of the live and passion that Winter and Caiden has for each other, and it intensified right throughout the story.
These two were such a great match with their headstrong thoughts actions and passion fir w writhing going on in the mystery that they were pulled into.
Their were twists I didn’t or hadn’t seen coming after reading book 2
This is nit your typical fairytale romance, I love how there has been suspense and action right throughout this series
Becca has grown so much in the past year with her writing and shown her ability to write in different styles.
I look forward to seeing the rest of the 4 and their stories but also look forward to other characters Becca had piquing my interest in Creed and Axel Savage
Also “ the s-x if s-x is the antidote required for Covid 19, these two would have cured the world
😂🤣 Because holy moly Becca ,
Looking forward to your next project 🥰
Read more